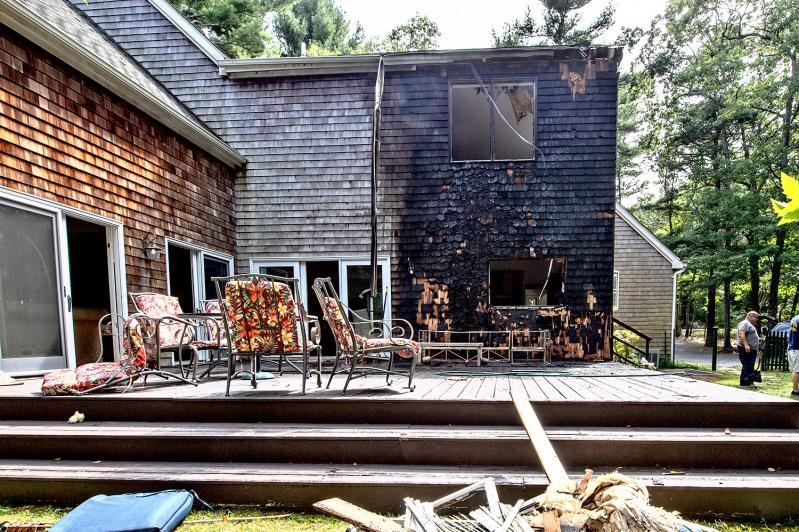 Citronella candles left burning outside started a fire on the deck, which crept into the house on Northwest Road on Sunday, the East Hampton Town fire marshal said.
Michael Heller
By Taylor K. Vecsey

East Hampton firefighters saved two dogs from inside a house Sunday afternoon after fire broke out on the deck, causing heavy smoke as it spread into the house. The fire began after renters lit two citronella candles and left them sitting on deck furniture while they were out, according to David “Buzzy” Browne, the chief East Hampton Town fire marshal.

A person walking along a trail reported a house on fire in the area of 225 Old Northwest Road at 12:24 p.m., Chief Gerard Turza Jr. said. Emergency dispatchers then received additional calls about the blaze, and the chief requested tankers from Sag Harbor, Springs, and Amagansett. The Sag Harbor Fire Department’s rapid intervention team was called in as well, in case firefighters needed to be rescued.

Old Northwest Road is “an area of concern for us,” Chief Turza said. There are large houses, mostly set back from the road, in a sparsely populated neighborhood with a dearth of public water, he explained.

Firefighters found flames on the back deck extending up the side of the house to the second story. The heat had broken the first and second-floor windows and the fire was starting to spread into the house, the chief said. It did not appear that anyone was inside.

“While searching the residence in zero-visibility smoke conditions, firefighters found and removed two dogs,” Chief Turza said. Firefighters had no indication that there were dogs inside, as they were not barking. During a primary search for fire and for any victims, a firefighter came across one of the dogs. Then, he found a puppy in a crate.

“If they went unnoticed for a few minutes longer they probably would’ve died of smoke inhalation,” said the chief. “Once they were brought outside in fresh air they were fine.” The dogs’ owners arrived soon after.

Firefighters made “an aggressive attack” on the flames and prevented the blaze from spreading further, the chief said. A small pocket of flames had extended into the basement, but was quickly extinguished, he said, adding that he canceled the call for help from neighboring departments, as firefighters were able to knock down the flames quickly.

Mr. Browne said the two candles had been left lit and unattended. “All evidence points to the candles to be the origin and cause,” he said.