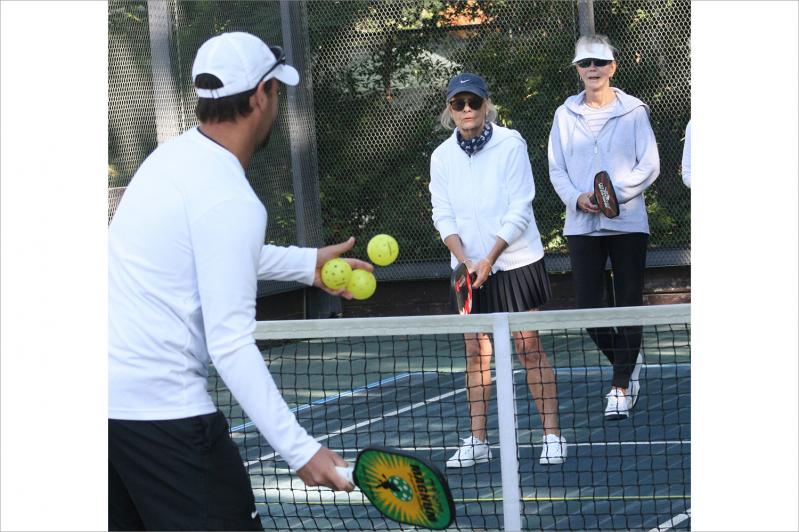 Attendance was robust at Matej Zlatkovic’s pickleball clinics at the East Hampton Indoor-Outdoor Tennis Club this past weekend.

The club’s reviving the game, which last was played there on three hardcourts behind the main building a half-dozen years ago. Those hardcourts are no longer, having been replaced by a grassy expanse, but pickleball lines were recently affixed to the club’s two platform tennis courts that lie alongside the path leading from the parking lot to the outdoor tennis courts.

Zlatkovic, who plays just about all the racket sports, said p­ickleball is easier to pick up than tennis or platform tennis, and is — an important point when it comes to older players — less taxing than tennis.

This writer, who still remains perplexed when it comes to tiebreakers, had signed up for one of Saturday’s clinics chiefly in order to finally learn how to score, and, by the end of it, he was reasonably sure he could.

Servers are to call out three numbers before they launch the ball underhand from behind the baseline — their team’s, the opposing team’s, and the number server they are, 1 or 2. Thus, 0-0-1 when the game begins.

Assume, though, that the winning team loses the next exchange, the ball would not be turned over — the second server, having announced the score as 1-0-2, would have a chance to retain it. Should he or she not hold, the ball would then go over to the opposing team, each of whose servers would in like manner get their chances at winning points. As was the case formerly in volleyball, points in pickleball can only be won by the serving team.

Sometimes the question arises as to who on your team is server number-one and server number-two. Zlatkovic, when questioned, said the first to serve remains server number-one throughout, which was good enough for me, who, as aforesaid, was after the clinic sufficiently encouraged to continue playing.

Pickleball’s a bang-bang game — E.H.I.T. is using Wiffle Balls on its platform tennis courts, though a softer ball is to be used indoors later this fall and in the winter — rewards aggressive play. The overzealous will pay, though, should he or she, while volleying, step within “the kitchen,” i.e., over a line that is seven feet from the net, which would result in the loss of an exchange. Fetching drop shots in the kitchen is allowed, however.

A quarter the size of a tennis court, pickleball, again as aforesaid, is less taxing on the body, and a lot of fun, which was the consensus of those who took last weekend’s $10 clinics. These clinics will continue apace, Zlatkovic said. Prospective clinic-takers can either call the club at 631-537-8012 or contact the club online through [email protected].