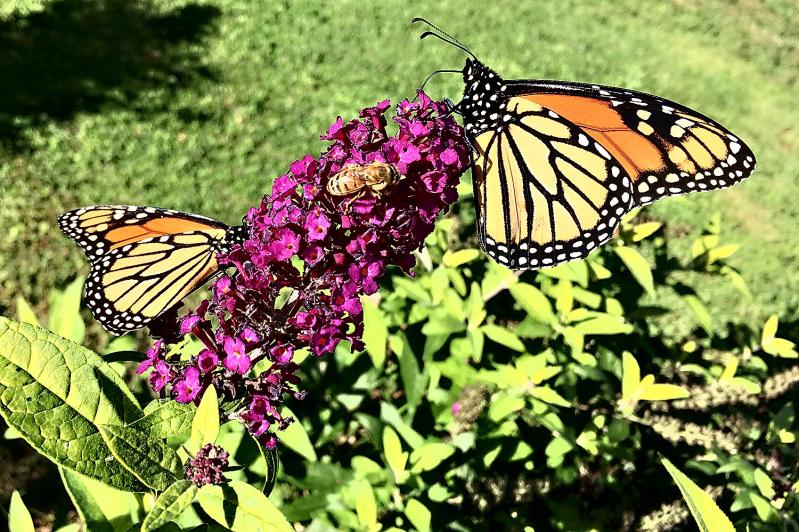 Two monarch butterflies stopped on a buddleia. Their fall migration is underway, with many favoring a route along the ocean beaches, where goldenrod is abundant.
Peter Dermody
By Larry Penny

It’s fall, the time of the big transition from summer birds to winter ones, the zenith for the blooming of the asters and goldenrods, the frenzied collecting of acorns, nuts, and seeds by chipmunks prior to retreating underground and entering into hibernation, to be joined by tree frogs and salamanders in this three-month siesta, and the movement south in the seas of bluefish, striped bass, tunas, and a host of other marine fishes.

All of these acts of change-in-seasons survival are sure to take place, but the way in which they occur is different each year.

Two of the greatest movements to warmer climes from colder ones that take place each year in both the Old and New Worlds are the great migrations of butterflies and dragonflies. In Europe and Asia, but also in the Americas, the closely related painted-lady butterflies move south, but way up in the sky, along with many dragonfly species. You may have seen the photographs recently posted in American newspapers that show what appear to be high clouds on the radar screen, but are in fact swarms of high-flying insects, many which are migrating southward.

On the other hand, the monarch butterflies moving in the same direction stick close to the ground, at least within eyesight. How is it that that they can take a more dangerous trip each fall, but a much more leisurely and delightful one, while others have to fly high in the sky where the airplanes go? It’s because monarchs are distasteful to would-be predators; one taste lasts a lifetime in the brains of bats, birds, and other predators that feed on insects, including butterflies.

And why are the monarchs so unpalatable? Because their precursors, the larvae they stem from, feed on milkweeds and dogbanes, both of which contain cardiac glycosides that can not only be poisonous to many would-be plant eaters, but which a few species — monarchs and milkweed beetles among them — thrive on. The larvae store the glycosides in their flesh, and they persist into the pupae, or chrysalis, and finally in the adults when they emerge and spread their wings.

Jean Held provides a firsthand account of the entire process. The larvae, colorful in their own right, are not good to eat, either. Birds and mammals learn to leave them alone. The caterpillar surrounds itself in a protective covering, much like the plastic bags we store winter coats in when they hang in the attic. The protective covering starts out somewhat opaque, but in the last stage of development becomes quite translucent. The beautiful adult that finally emerges acts like a groggy prizefighter after a knockdown. It  stumbles around for quite a while, ultimately spreading its unfolding wings, pumping them, and then taking flight.

They have to be expert fliers to handle the winds and fly all the way to Mexico, where they finally end their journey, clump together and overwinter in the same fir forests of a certain 10 or so mountainous areas in the states of Mexico and Michoacán. It would be a much more perilous journey if they didn’t have those glycosides and those distinctive orange patches separated by black lines that warn potential predators to stay away.

When I lived in Monterey in coastal California as a young Army man for more than a year, I saw those monarchs that migrate north in the spring to breed in our Northwestern states fly to the coast in the fall and overwinter in Pacific Grove in the same large clusters. There are so many hanging from evergreens and eucalypti each winter that Pacific Grovers celebrate them with a Monarch Butterfly Day. That place has come to be known as Butterfly City.

Locally, we have several monarch breeders and counters. Victoria Bustamante, an expert botanist who is in charge of perhaps the largest native plant collection on eastern Long Island, situated in the Village of Southampton, makes an annual count each year. As of Sunday she has seen 203 different monarchs, two more than last year’s final total.

On the other hand, Peter Dermody, a hydrogeologist and longtime monarch promoter from Brookhaven who has a yard filled with nectaring plants like goldenrods, asters, and Joe Pye weeds, sees about 20 a day. He has also determined, along with many others, that monarchs when migrating south from Connecticut and Massachusetts fly across the sound to Long Island, then fly across the North Fork and Central Pine Barrens to the ocean, where they turn right and head to New York City. They seem to be following the seaside goldenrods, which are a dominant ocean dune species, provider of nectar, and one of the last goldenrods to flourish in the fall. Those that land in Montauk pick up the ocean route right away, and why not? The seaside goldenrods form an east-west band to the city more than 100 miles long.

People in Montauk see them coming to breed in the spring, migrating westerly in the fall. One Montauk resident, Matthew Galcik, whose father was the caretaker of Shadmoor Park for several years, has created what one might call a monarch butterfly ranch. He has planted so many milkweeds at his place west of Lake Montauk that their pupae cover the sides of his house, and then some. He reports that some of his milkweeds are still in bloom at this late date and several of those beautifully striped caterpillars, with rings of yellow, green, and white, are still chomping on them.

One last monarch item: There is another American butterfly called the viceroy that looks much like the monarch with its orangish coloration. It tastes good to would-be predators, but its summer range is similar to the monarchs. Viceroys resemble monarchs to the point that predators eschew them.