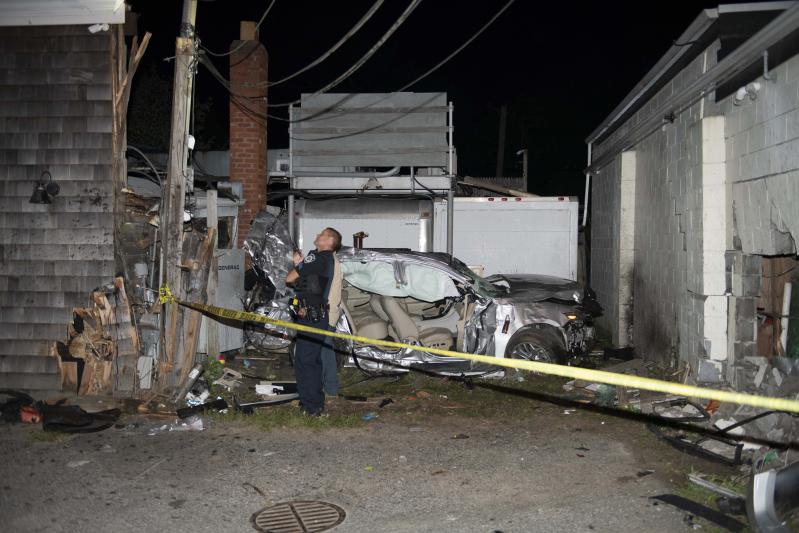 A 20-year-old East Hampton man is in critical condition at Stony Brook University Hospital after crashing his car into two buildings in Springs just after midnight Friday. The car, a 2018 Ford Taurus, came to rest wedged between the Springs Auto Repair Shop and the Montauk Market.

Kevin Buestan, who was alone in the car, was headed south on Springs-Fireplace Road, near School Street, when the accident occurred. The Taurus smashed into the cinderblock side of the auto repair shop, toppling part of the building, and into the market. Speed, as well as alcohol, appears to have been a factor, said East Hampton Town Police Sgt. Vincent Rantinella.

Police called for a "forthwith" response from the Springs Fire Department, which responded with its heavy rescue equipment and emergency medical services, Chief Darrin Downs said on Saturday morning. Mr. Buestan was trapped in the severely damaged car, which was wedged between the two buildings, up against an electrical meter and panel.

"He wasn't pinned, we just couldn't get to him to remove him without removing the passenger-side doors,” the chief said. A support post in the center of the car had to be removed as well. He was wearing a seatbelt.

First responders had to worry not only about the patient's condition, but also their own safety, with structural damage done to at least one of the buildings and overhead electrical lines. Chief Downs was concerned about a building collapse. Firefighters worked to "shore and brace the car and remove the rear door," while E.M.S. personnel tended to the driver, he said. "Once we had enough room, we placed him on a backboard and removed him from the car."

The county medevac helicopter met the Springs ambulance at East Hampton Airport and flew Mr. Buestan to Stony Brook University Hospital, the closest level-one trauma center. He was listed in critical condition as of Saturday, though Sergeant Rantinella said his injuries were not life-threatening.

Mr. Buestan has been charged with misdemeanor driving while intoxicated, the sergeant said. He will be arraigned in East Hampton Town Justice Court at a later date.

The Springs Auto Repair Shop was still cordoned off on Saturday afternoon, a tarp covering the hole in its side.