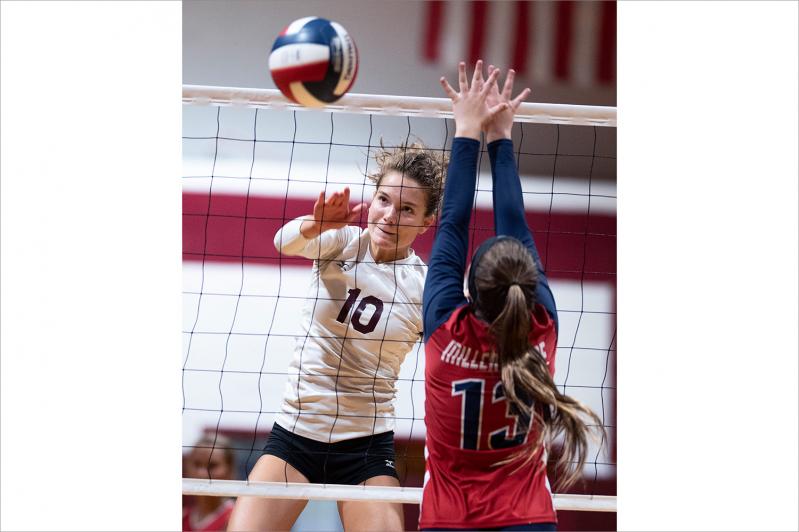 Bye-bye: Mikela Junemann followed through on one of the numerous kills she had during the East Hampton girls’ sweep of Miller Place here Friday.
Craig Macnaughton
By Jack Graves

“They didn’t have their best hitter,” Josh Brussell, the boys’ coach, said after the 25-17, 25-11, 25-14 win, “but still. I’m proud of our guys. We’re better than we were last year. Last year when we were down we stayed down. This year that’s not so. We were down against Commack” — a team the Bonackers defeated in five sets — “but came back to win. Conversely, we don’t want to get too silly when we’re cruising along, as we were today. We want to just keep playing our game.”

There are no captains on Brussell’s team. He is, by and large, trying to let them play. “I was telling them not long ago that their serves had to go in, to the point where they said, ‘Coach, we know they have to go in.’ And, indeed, since I began listening to them more, their serves have been going in.”

“We’ve got tons of seniors this year, guys who have been on the varsity squad now for three years and they’re great friends.”

While not as highly-placed at the moment, Bonac’s girls are faring well too. As of Monday, they were in a second-place tie in League VI, at 2-1, with Sayville and Westhampton Beach, behind 3-0 Kings Park.

Alex Choi, the team’s first-year coach (he had been the retired Kathy McGeehan’s assistant the past four years), said afterward that he’d pretty much emptied his bench in the third set.

A block by one of those subs, Lea Mancini, notched the 25th point, and Kayla Kearney, a fellow junior, subsequently served the match out as Miller Place erred at the net.

Mikela Junemann, a hard-hitting senior, Molly Mamay, the senior setter, Zoe Leach, a senior outside hitter, and Hannah Hartsough, the junior libero, were particularly noticeable that afternoon — Junemann with her emphatic kills, and Mamay and Hartsough with their difficult-to-return topspin serves.

With Mamay serving, the Bonackers upped a 12-10 lead in the second set to 17-10, three of those serves being aces, after which the home team cruised to the 25-19 win.

Mamay served East Hampton to a 3-0 lead in the third set, but soon after the visitors were up 8-3. The Bonackers continued to trail by that margin until, at 16-21, Mamay came in to serve again. By the time she’d finished, the score was 20-22. A soft, left-to-right kill by Anni Spacek brought East Hampton to within one, and a subsequent block by Amanda Krahe tied it at 22-all. Kearney served the match out, as aforesaid.

East Hampton’s team, greatly realigned by Choi following the graduation in June of nine seniors, was featured the day before in Newsday — an article about the Bonackers’ 3-2 win at Islip that cited in particular the play of Junemann (17 kills), Leach, and Sorrel Miller.

“It’s really a brand-new team,” said Choi, noting, among other changes, that he’d moved Leach, formerly a defensive specialist, to outside hitter, and Mamay from libero to setter. Junemann, he said, could play anywhere.

Kings Park, which had upset last year’s team in the playoffs, swept the Bonackers 3-0 in a season-opener on Sept. 4, but perhaps it would be a different story the next time, the coach said.