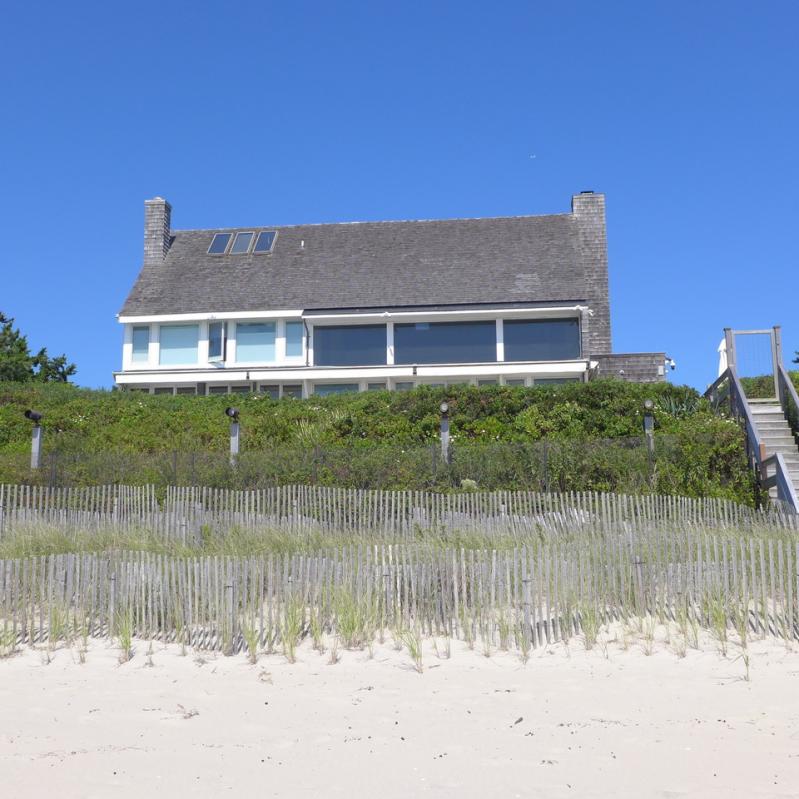 The owners of 33 Lily Pond Lane told the village zoning board they will abandon their plans to replace the house and instead renovate it.
Jamie Bufalino
By Jamie Bufalino

Toward the end of a contentious meeting at which neighbors threatened legal action should the East Hampton Village Zoning Board of Appeals allow the replacement of a house at 33 Lily Pond Lane by a larger one with more amenities and lot coverage, the property’s owners told the board they would abandon their plans and renovate the existing residence instead.

In January, Norman and Helene Stark, who have been represented at board meetings by the attorney Leonard Ackerman, proposed tearing down the existing 4,600-square-foot house and replacing it with a 7,567-square-foot one, within the coastal erosion hazard area but 35 feet farther landward. They also proposed installing a swimming pool within the hazard area, and sought nearly 19,000 square feet of lot coverage for structures such as a patio, retaining walls, and staircases, where the legally allowed amount is 17,000 square feet.

At the Z.B.A.’s request, the Starks scaled back those plans. The application that came before the board on Friday called for the construction of a house in the same-size footprint as the existing structure, a repositioning of the pool out of the hazard area, and a reduction in lot coverage to just under 16,900 square feet. The applicants still needed 18 variances, including one for a 39.5-foot-high roof, where the maximum is 34.

The zoning code allows for a building permit in a coastal erosion hazard area if construction is deemed “reasonable and necessary” and “not likely to cause a measurable increase in erosion.” The criteria for obtaining variances for the actual construction include demonstrating that no reasonable, prudent alternative site exists, and that the variances requested are the minimum necessary to overcome any practical difficulty or hardship.

Linda Margolin, also representing the applicants, told the zoning board that the steeply sloped topography at the north end of the property prevents the Starks from building a new house outside the hazard area, thus causing them “practical difficulty and hardship.” No other prudent site exists for the house, she said, due to the slope and because the Starks need room for parking, a new septic system, the pool, and other structures.

Paul Jacobs, whose wife owns 37 Lily Pond Lane, which is next door to the Starks, disagreed with Ms. Margolin’s assessment. “It’s a 1.76 acre site, it’s obvious there are other locations for the house,” he said. The statute, he said, calls for a “prudent” alternative, “not ‘most desirable.’ ”

He and his wife would suffer “extreme hardship” if the Z.B.A. approved the application, he said, because the proposed 40-foot-high roof would ruin an unobstructed view of the ocean from the terrace of their master bedroom.

In order for construction crews to reach the Starks’ property, added Mr. Jacobs, they would have to travel along Tides Turn Lane, a private road with shared ownership among the Starks, the Jacobses, and Jeffrey and Marjorie Rosen, who live at 41 Lily Pond Lane. “Tides Turn Lane is 9.5 feet at its narrowest, and 12 feet at its widest,” said Mr. Jacobs. Construction trucks, he said, would inevitably destroy hedgerows and plantings.

If the Starks were to begin construction without the consent of their neighbors, he said, the neighbors would seek a temporary restraining order against them. “We’re confident that a T.R.O. would be issued,” Mr. Jacobs said.

Rather than demolishing the existing house and building a new one, he suggested that the Starks should renovate the old structure. Renovation, he said, would be more in line with previous approvals granted by the Z.B.A. and cause much less disturbance to the property.

If the Z.B.A. were to approve the Starks’ application, it would set a precedent that would encourage other homeowners to build new houses on their properties, he concluded.

Raymond Harden, the board’s vice chairman, along with Lawrence Hillel and Craig Humphrey, said their concern about setting such a precedent was preventing them from approving the application.

“You can hear the reluctance,” Lys Marigold, the chairwoman, told Mr. Ackerman.

“If you feel there aren’t votes to approve this, then we’ll have to go back with an application to modify the existing house, and that’s what we’re going to do,” Mr. Ackerman said angrily. He accused the board of having “misled” him in previous meetings with its requests to pare down the application.

“Why would you walk away from an application to retreat?” he asked.

The precedent the board is actually setting, said Mr. Ackerman, is, “Unless your house burns down, God forbid, or is destroyed in a storm, you cannot build a new house in its existing location.”

The hearing was adjourned, and Mr. Ackerman said he would amend the application quickly, to reflect a renovation.

Also on Friday, the board announced three determinations. Timothy J. Kelly, the owner of 91 Dayton Lane, was granted variances to legalize the installation of two air-conditioning condenser units approximately 8 feet from the rear property line, where the required setback is 10 feet.

William Drucker, Rhonda Rosenbaum, and Abby Drucker, the owners of 20 Church Street, were granted variances to allow the reconstruction of a cellar with alterations 11.2 feet from the front lot line and a window well 11.9 feet from the front lot line, where the required setbacks are 19.2 and 25 feet respectively. The variances were granted on condition that no bedrooms be permitted in the basement.