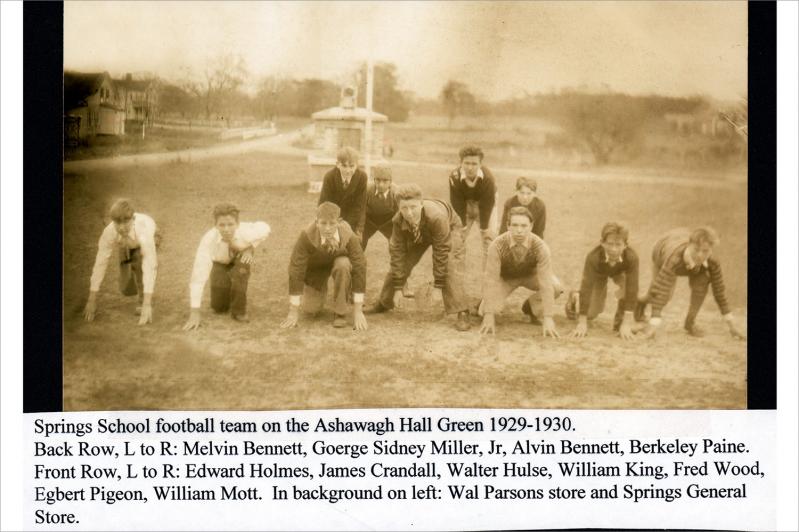 Students have returned to school this month, and many of the sports teams are playing again. Members of the 1929-30 football team from the Springs School appear in the photograph seen here from the Springs Historical Society’s archives. Players in button-down shirts and ties can be seen lining up, with only one, toward the rear of the formation, wearing a leather helmet.

This photo was taken on the green next to Ashawagh Hall, with the Soldiers and Sailors Memorial monument visible in the background, and the Springs General Store on the left. A caption identifies all of the boys, and most of the last names are from familiar local families, including Mott, Bennett, King, and Miller. This group picture was most likely taken sometime between September and December of 1929.

What is particularly special about it is where the team went to school. The boys are shown next to Ashawagh Hall, which was where the Springs School held classes in the fall of 1929 after a fire on Jan. 30, 1929, burned the school to the ground.

The 56 students attending school at the time of the fire all vividly recalled the incident, with many mentioning it during interviews for Tony Prohaska’s History Project, Inc. (also known as the Springs Oral Histories). One of the boys in this picture, Melvin Bennett (born in 1915), remembered that the fire couldn’t be put out, saying, “They just watched it go down.” Within 30 minutes, the school was completely destroyed.

Some shown here may have been among the group of “older boys” who “carried the piano from the second floor” of the school. Mr. Bennett, like many others, remembered going to school in the two-room Ashawagh Hall in the days that followed.

Andrea Meyer is a librarian and archivist with the East Hampton Library’s Long Island Collection.