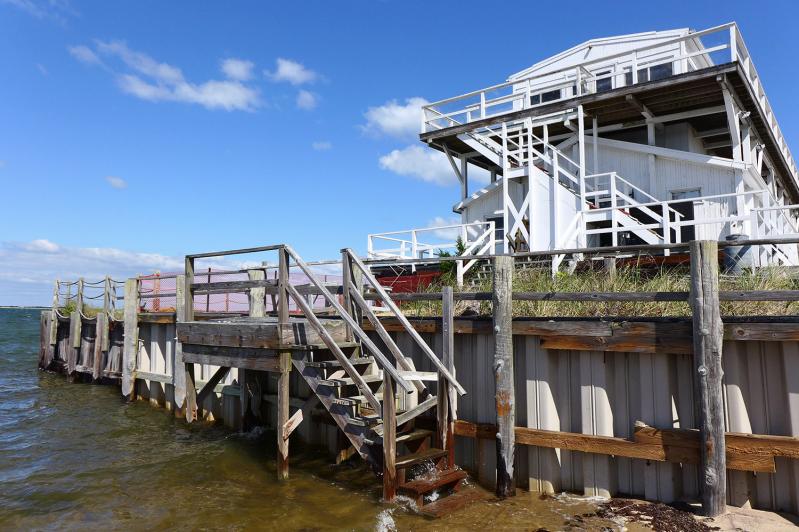 The bulkhead protecting the Art Barge from Napeague Harbor has severely deteriorated on its eastern side, with sand leaking through it and into the harbor. Work to replace it will begin soon.
David E. Rattray
By Christopher Walsh

The Victor D’Amico Institute of Art, also known as the Art Barge, has closed for the season, but a project critically important to the Napeague landmark’s reopening next year is intensifying.

The bulkhead protecting the retired Navy barge from Napeague Harbor is in need of reconstruction. It has severely deteriorated on its eastern side, with sand leaking through it and into the harbor, rendering it ineffective and the ground landward unsafe to traverse.

Preparations are underway and the reconstruction is to begin “very soon,” according to Esperanza Leon, the institute’s administrative coordinator. The property will be secured so the public is not endangered, Christopher Kohan, the institute’s president, said last week. “The whole thing — the bulkhead — is going to be taken down and a totally new structure is going to be put in,” he said. With an eye on sea level rise, the new bulkhead will be built 18 inches higher than the existing one.

First Coastal Corporation of Westhampton will perform the reconstruction, and Billy Mack of First Coastal said on Monday that work could begin by the end of this month. “We’ll have an excavator that will access along the landward side of the bulkhead to remove it in sections,” he said. “At the same time we remove 20, 30, or 40-foot sections, we will replace them with the new bulkhead.” Once the new bulkhead has been installed, “We will backfill with clean sand,” he said.

On Aug. 28, the institute, which the East Hampton Town Board recently designated a local historical landmark, launched the Bulkhead Challenge, a fund-raising effort for the reconstruction. Amy and Bill Conway of Springs, the former a student at the Art Barge, offered a matching donation of $25,000 if the institute raised the same sum by Wednesday. Yesterday, Ms. Leon said that the $25,000 had been raised ahead of schedule, which triggered the Conways’ matching gift as well as the couple’s offer of a second $25,000 match if the Art Barge can raise another $25,000 by Oct. 25. Should the second round of fund-raising be successful, the goal of raising $100,000 would be achieved. “Fund-raising will continue until the full amount is raised to cover the reconstruction costs,” Ms. Leon wrote in an email on Monday.

These fund-raising efforts are creative, of course. The institute recognized National Arts in Education Week, which began on Sept. 8, with an email to members and supporters illustrating an 11-year-old boy’s efforts to raise money for the bulkhead reconstruction. Jack, who with his twin brother took classes at the Art Barge this summer, creates and sells “bucket hats” through a dedicated Instagram account, @jackandtheartbarge.

“Jack’s goal was to raise $2,000 before the start of the school year,” Ms. Leon wrote. “He surpassed it by selling a total of 116 hats and raised $2,320, all of which he donated to the Bulkhead Challenge.” The student’s contribution brought the institute closer to the first $25,000 in matching funds offered by the Conways.

This week, Ms. Leon said, the focus is on a glass art sale featuring works by artists included in a summer exhibition at the D’Amico House, the Shore Road residence of the late Victor and Mabel D’Amico. Also designated a local historical landmark by the town, it houses permanent and rotating exhibitions of visual art, among other objects. A selection of glass art will be offered online, with 30 percent of sales donated to the Bulkhead Challenge. “This online sale will take us through our first deadline and end on Oct. 14,” Ms. Leon wrote.

Next year will mark the institute’s 60th anniversary. “We are planning and preparing to launch a refreshed curriculum of classes and schedule of programming to recognize and celebrate the Victor D’Amico Institute of Art’s enduring presence and impact on the East End, as recently acknowledged by the town with the resolution designating the Art Barge, along with the D’Amico Studio and Archive, as local historical landmarks,” Ms. Leon wrote. “There are exciting plans afoot and the new bulkhead is integral to our reopening the Art Barge next year.”

Donations to the Bulkhead Challenge can be made at theartbarge.org or by calling 631-267-3172.