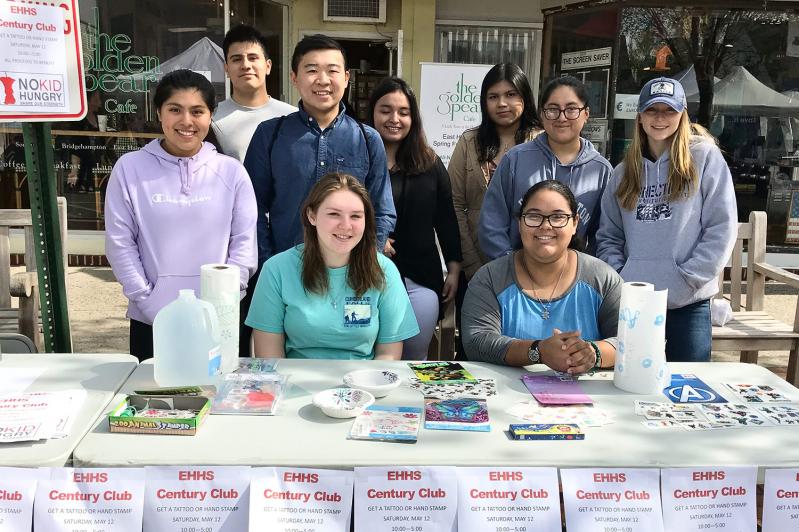 Members of East Hampton High School’s Century Club — comprising students who have accumulated 100 hours or more of community service — raised money in the spring for No Kid Hungry by selling temporary tattoos and animal stamps at the East Hampton Street Fair.
Debbie Mansir
By Christine Sampson

The words “volunteers needed” are heard frequently in and around East Hampton, and high school students often rise to the challenge.

It’s a symbiotic relationship. Organizations get the help they need to carry out their missions, and students earn the community service hours they need to graduate from high school — a local requirement rather than a state mandate, noted Debbie Mansir, East Hampton High School’s program director.

The East Hampton School District has had mandatory community service for about 15 years, with a minimum of 30 hours to graduate. Students can begin accumulating hours as early as eighth grade, with a 10-hour maximum carried over into high school.

“The main goal is to expose the students to needs in our community,” Ms. Mansir said, “not only locally but nationally and globally, to instill in them a sense of giving back that becomes a lifelong purpose for them.”

Alfredo Chavez and Eileen Considine, seniors and co-presidents of the high school’s Century Club, a group of students who have accumulated 100 hours or more of community service, advise their peers not to wait until senior year to finish the requirement.

“Senior year comes around and you have to somehow make 30 hours, which becomes difficult for many because they have jobs now, college applications, and scholarship applications,” Alfredo said. “It’s a busy year. To add 30 community service hours is a challenge for kids who aren’t used to doing it in the first place.”

Eileen recommended that students begin as freshmen. “You don’t have as much homework as junior and senior years, and you don’t have to worry about SATs right then and there,” she said. “Freshmen should take into account how much work they’ll have in the future, and they should knock out as much as they can.”

Students can volunteer with a wide range of organizations — Project Most, the Animal Rescue Fund of the Hamptons, the East Hampton Food Pantry, and Stony Brook Southampton Hospital or medical rehabilitation programs, just to name a few. Eileen, inspired by her love of film, has helped out at the Hamptons International Film Festival. Alfredo has worked with Project Most.

Some student clubs, like the Tri-M Music Honor Society and the National Honor Society (Eileen and Alfredo belong to both), have service requirements of 15 hours each before a student is eligible to join. Those hours don’t count toward the graduation requirement, Eileen noted.

“One or two students have gone over the thousand-hour mark” since the program started, Ms. Mansir said.

Other schools, like Sag Harbor’s Pierson High, have implemented similar graduation requirements. Pierson asks for 10 hours from each student and maintains a list of approved activities to choose from. The Bridgehampton School mandates 40 hours.

As program director in East Hampton, it’s part of Ms. Mansir’s job to help students understand this graduation requirement and figure out how to complete it. She communicates regularly with local community groups who need assistance, and advertises those volunteer opportunities to the students.

Membership in the Century Club is an incentive for kids to exceed the 30-hour minimum. It looks great on college applications, Ms. Mansir said.