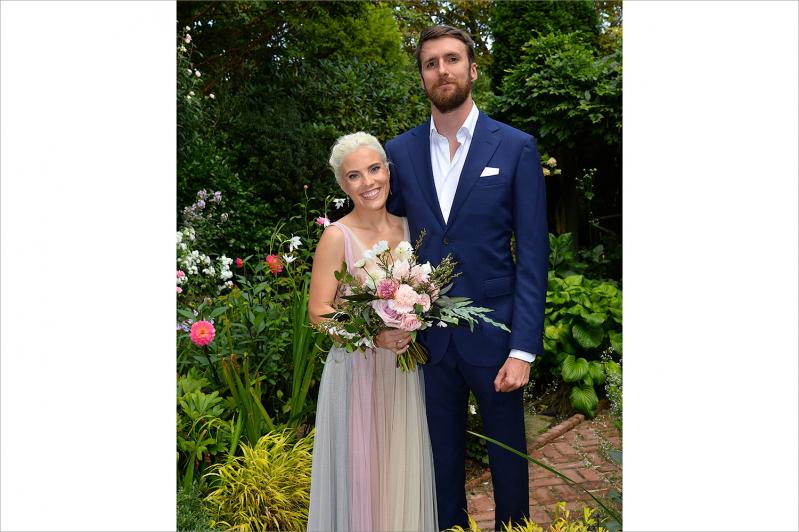 Felicity Carmichael Sundlun and Eric Kavan Spencer were married on Saturday in the Amagansett garden of Nina Gillman, a family friend.

When the Unitarian minister who had been a close friend of Mr. Spencer’s grandparents was unable to officiate, Deborah Carmichael, an aunt of the bride, became a minister of the Universal Life Church in order to preside. Having known the bride all her life, Ms. Carmichael “was in a strong position to hit the ball out of the park when she wrote up the talk she gave before the exchange of vows,” wrote the bride’s mother, Isabel Carmichael, who proofreads and writes at The Star.

The bride was attended by Jaime Brookstein, her best friend. Stephen Wesley was the groom’s best man.

Ms. Carmichael Sundlun and Mr. Spencer met in 2016 in Manhattan on the dating app Bumble. She called her mother to say she would like to bring him out to East Hampton for a visit, adding that her mother would like him. “ ‘He carries the suitcase, he holds the door. . . . ’ ” her mother recalled her saying.

The bride, the daughter of Ms. Carmichael of East Hampton and Tracy Walter Sundlun and Marissa De Luna of Santee, Calif., will add the name Spencer to her own. She is the operations manager of Love Adorned, a lifestyle and jewelry enterprise with shops in Manhattan, Amagansett, and the arts district in downtown Los Angeles. Mr. Spencer is a co-founder of the Jamrock Group, a small advertising agency.

The bride was educated at the Hampton Day School, attended Concord Academy for two years, and graduated from Phillips Exeter Academy. She earned a B.A. from the Annenberg School for Communication and Journalism at the University of Southern California. Mr. Spencer, who grew up in Princeton, N.J., and Longwood, Fla., earned a B.A. in English literature and anthropology at the University of Southern Florida. He is the son of Betsy Jane Kavan Spencer and Rick Michael Spencer of Longwood.

Mr. Spencer acquired the nickname Le Viking in his bride’s family, partly because of his height (6-foot-5) and also because both sets of his grandparents immigrated to Westhampton Beach from Norway . . . and his father is 6-foot-8.

Mrs. Carmichael Sundlun Spencer wore a pastel-colored dress designed by Willowby by Watters and carried a bouquet by Rachel Clark of Dearest Rachel, who also designed and put together the flower arrangements for the reception and dinner at the Mulford Farm in East Hampton, where the 100-plus guests sat at two very long tables.

In her speech, Deborah Carmichael alluded to the application for boyfriend status that she had interviewed the bride for when she was 18 and disheartened by the dearth of eligible young men. “Because of this application, it was possible, her family felt, that they had conjured Mr. Spencer, as he fit every requirement listed and therefore was not to be fed to the lions, but was to be Ms. Carmichael Sundlun’s life partner,” the bride’s mother wrote.

The couple, who live on the Upper West Side in Manhattan, have planned a wedding trip to Jamaica in December.