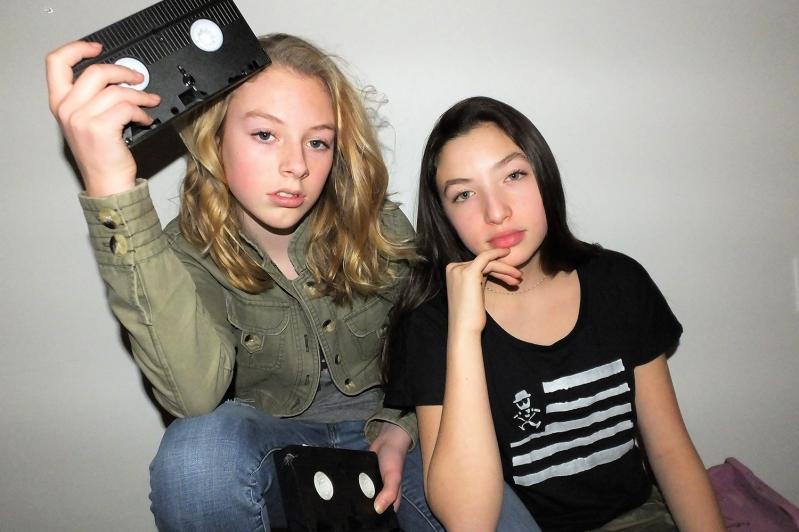 Kaylie Wilson, left, and Lua Li, friends who dance together at the Hampton Ballet Theatre School, have also starred together in a number of independent films by Adam Baranello.
Adam Baranello
By Christine Sampson

Their years of disciplined ballet training stood in stark opposition to the improvised contemporary choreography that their film roles required. It was an adjustment for Kaylie Wilson and Lua Li, who are longtime students at the Hampton Ballet Theatre School. But together, the two friends helped each other adjust to a new style for a series of movies they starred in together over the last four years.

“It’s been really cool to explore with creative ideas to decide what to do. We always get a say in what happens,” said Kaylie, 16, a junior at Southampton High School. “I never planned anything, I would just take it to where I needed to be.”

“It was a lot more challenging for me,” said Lua, 14, a freshman at East Hampton High School. “Kay is a lot more creative than me. In ballet we’re taught to stick to the program, no improv, but here we have to branch out and think of our own ideas.”

Kaylie and Lua have essentially grown into their teenage years together on film. They have starred in four indie flicks produced and directed by Adam Baranello of Hampton Bays, a musician, choreographer, and artist in addition to filmmaker. Lua had a role in a fifth film several years ago, too, and Kaylie directed a scene in Mr. Baranello’s latest, “Odd,” which will be released Oct. 1.

“It’s been cool to see how they take the characters and process and translate,” Mr. Baranello said in an interview. “How they influence and inspire me has made the films go where they go to. They should get even more credit than it seems. And it’s cool how their strengths play off of each other. It’s fun to see.”

Kaylie said that means they don’t get on each other’s nerves. “A lot of how we act toward each other completely reflects how we are when we see each other for the first time in sometimes a month,” she said. “Sometimes it works in our favor — that way we’re not annoying each other too much.”

“Out of everyone,” Lua added, “I’m doing this with the perfect person to be working with.”

Mr. Baranello’s productions are black-and-white art films centered around dance and the idea of being true to oneself, even if one is “Beautifully Strange” or “Odd” — which happen to be the titles of the first and third installments of his trilogy. The middle film is “Weird Ones.” Each part of the trilogy was or will be featured in the Manhattan International Film Festival, and both “Beautifully Strange” and “Odd” received nominations for best feature.

Lua plays C, which stands for “Coffee.” Her first role was in Mr. Baranello’s “Dead End” in 2015, and she appeared in “Exit” in 2016 before taking on the trilogy. Kaylie joined the cast for “Exit,” and in the three most recent films she plays T, for “Truth.” Gail Baranello, a professional dancer and teacher who happens to be Mr. Baranello’s wife, also stars in the films.

From dancing in disguise to being fake-kidnapped to being wrapped in tinfoil, they’ve taken on a wide range of challenges that speak to the nature of indie film.

“It took a very long time and it was interesting,” Kaylie said of the tinfoil costume. “It was pretty cool how it turned out, but I was definitely nervous to go walk around outside, in public, wearing tinfoil and a biker helmet.”

Lua’s own “tinfoil” moment came when — spoiler alert — her character was abducted in the film. “I had to get duct-taped to a chair, and I had a special makeup artist, a.k.a. Kaylie, make it look like I was crying, so I had mascara all over my face,” she said. “I had to scream really loud, and that was hard for me because I’m really quiet.”

Their friends are slowly learning of the duo’s acting credentials.

“It took a while for me to open that up to them,” Kaylie said. “I used to not tell anyone. I was so nervous about it, but I’m actually very happy with the reaction I’ve gotten from it.”

“You have to see it to be able to explain it,” Lua said of Mr. Baranello’s films.

Mr. Baranello, who has screened his films at the Southampton Cinema and at Hampton Photo Arts, where he is a regular in the visiting artist rotation, will soon announce where “Odd” will be screened for the public.

He said sometimes the professional actors in his films aspire to be more like Lua and Kaylie.

“They deserve to be celebrated for their work,” Mr. Baranello said of the two teen actors. “They work hard, and they’re awesome, and it’s not easy to do.”