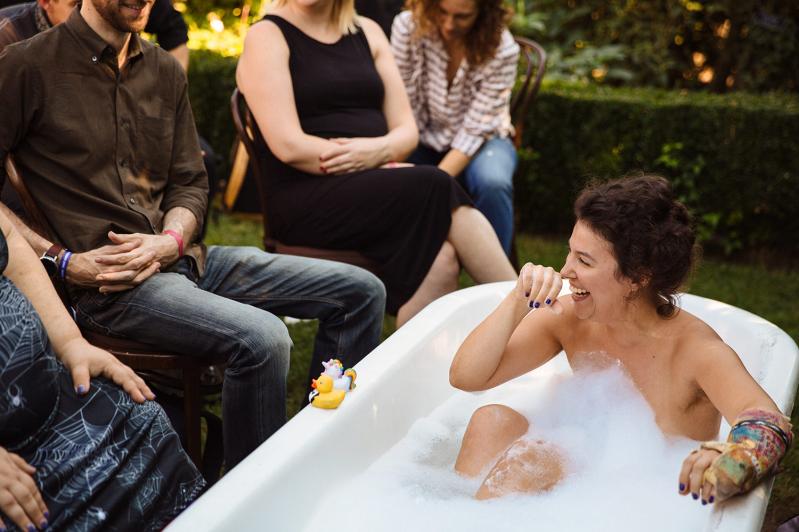 Siobhan O’Loughlin, a former Guild House artist in residence, has been touring her immersive theater production “Broken Bone Bathtub” around the world for the past five years.
By Judy D’Mello

A young, naked woman with a cast on her left hand sits inside a bathtub filled with bubbles. This is a Guild Hall show but she isn’t in a bathtub onstage at the John Drew Theater. She’s in a real, functioning bathroom inside a house in an undisclosed East Hampton location that ticketholders for “Broken Bone Bathtub,” billed as “an immersive theater production by Siobhan O’Loughlin,” must walk to after congregating in the Guild Hall lobby.

It’s a beautiful old village house and the upstairs bathroom is small but lovely, all draped in fairy lights. Six of us squeezed in there for last Thursday’s opening performance and sat in very close quarters to the naked lady. The bubbles covered her bits, for which I was grateful because, I mean, if not, there’d be too many social anxieties to overcome. Like, where should one’s eyes land? And, can you really recall any line of dialogue delivered by an actor in the buff? Me neither. Also, I wonder, wouldn’t a nude show inevitably be a magnet for perverts? Though, in fairness, probably great for business. A dedicated Peeping Tom might even bulk-buy the maximum 10 tickets allocated for each show, and then return a number of times during the show’s run, which ends on Sunday.

So there’s no nudity, thankfully, though it got precarious about 15 minutes into the performance as the bath water started draining at an alarming rate. “I even taped up the drain just to be sure,” said a not-terribly-worried Ms. O’Loughlin, as she skillfully scooted over to check the plumbing, revealing only a touch (obviously, I looked!). “But it’s my first performance in this tub so I’ll have to figure it out.”

“Broken Bone Bathtub” is an hour’s worth of theater like you’ve probably never seen, or possibly never will again. Like most immersive productions, you are much less of an audience member here and more of a participant. Loosely embracing categories like “promenade performance” and “site-specific play,” immersive theater refers to any production in which audience members are put into the scene, and maybe even given bodily involvement in the action. Sometimes, as in “Sleep No More,” the massively popular, British site-specific show playing in New York, the audience is even allowed to explore the space of the play all on its own.

But Ms. O’Loughlin’s theater piece, which has been touring the world for the last five years, offers something more: a terrific rapport with her audience, having seemingly perfected the art of finding ways that make sense of why the audience is present at all and allowing them to play their part.

This is not a monologue delivered by a woman in a bathtub. Last Thursday, it was a seven-way conversation between the performer and six random people, treated more like confidants who just happen to be in a small, humid bathroom discussing loneliness, connections, love, and loss. Does it all work? Yes, it emphatically does.

Her story begins with her broken hand, the result of a bicycle crash in Brooklyn a few years ago. Splayed on the wet sidewalk after her crash with another female cyclist, she tells us that she was struck by a feeling of isolation and the absence of a loving someone in her life — musings instigated by the sight of the other crash victim being comforted and cared for by her significant other. She felt jealous.

“Have you ever felt jealous?” she suddenly broke from her narrative and asked an Air Force veteran on my right.

“No,” he answered, tentatively. “No, I don’t think I feel jealous. But I went through a lot of therapy.”

And there’s the real beauty of this show: You think you are there to hear the naked lady’s story but really we are there to get to know each other. In between telling us why she ended up bathing in friends’ bathtubs, she doled out tasks — the Air Force vet got to wash her back, which he seemed to enjoy quite a bit — and asked provocative, though never intrusive, questions. An artist among us revealed that she was badly burned 35 years ago and was deeply jealous at the time of the unscarred occupational therapists who worked with her.

“Have you ever broken a bone?” she asked another woman.

“What do you do when you feel sad?” she asked a lawyer, the only other man in the group.

“I try to look at the big picture and push through. Try to focus on the next task ahead,” he answered, like a proper lawyer.

“How about you?” she asked the woman who was massaging her hand. “What do you do when you’re sad?”

“Shop,” she replied, and we all cracked up.

“Do you hold hands in public?” she asked me, before another woman began washing her hair.

“Sometimes,” I answered, though I’m certain everyone could tell that such vagueness really means “Not enough.”

By creating these interactions that are very human, very intimate, and often feel like a series of hugs, Ms. O’Loughlin organically forms tiny peepholes into each of our lives. We entered the bathroom as complete strangers, but as we learned these small details about each other, we left feeling a connection, however fleeting.

But two days after experiencing “Broken Bone Bathtub” I am still thinking about my hour with the Air Force vet, the beautiful burn victim, the lawyer, and the two funny, chatty female friends. Above all, I think of the naked lady who brought us together and, rather cunningly, managed to synchronize our heartbeats in a shared oneness, which is, by all accounts, the truest hope of live theater.

And then I think: What a wonderful antidote such an experience is to our increasingly disembodied, digitized, and virtually unreal lives.

Performances run Thursday at 7, Friday and Saturday at 7 and 9 p.m., and Sunday at 3 p.m. Ticketholders must meet at Guild Hall and walk to the nearby performance site. Tickets are $40, $38 for members.

Spring Has Sprung at the L.V.I.S. Shops
An Online Auction for ARF
A Rescheduled Telephone Town Hall With Lee Zeldin
END_OF_DOCUMENT_TOKEN_TO_BE_REPLACED