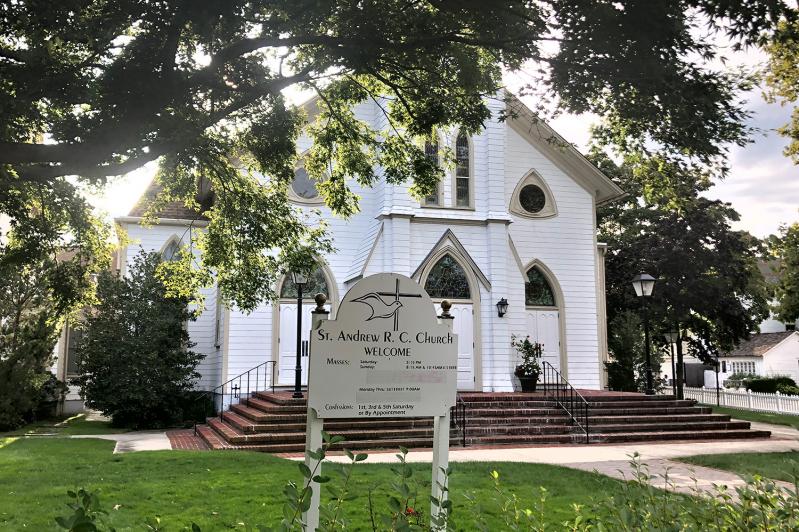 St. Andrew Catholic Church in Sag Harbor has been named in a civil complaint alleging that two former priests abused a boy years ago.
Christine Sampson
By Christine Sampson

Sag Harbor’s St. Andrew parish is among about 170 parishes around the state named in a widespread sex abuse complaint brought by people who say they were abused, as children, by clergy at those parishes and in some cases their schools.

St. Andrew Catholic Church and its former elementary school, the St. Andrew School, employed two priests who allegedly abused a man who is now an adult living with his family in New Jersey.

The Diocese of Rockville Centre, which oversees Catholic churches and schools on Long Island, was served Aug. 28 with lawsuits and formal discovery requests that are said by attorneys to begin the process of revealing many decades of “secret files” containing evidence of child sex abuse.

The process began last month when hundreds of complaints were filed under New York State’s Child Victims Act, which went into effect on Aug. 14 and opened a one-year window for “all cases for anyone of any age” to file suit, according to Jennifer Freeman of the Marsh Law Firm. Ms. Freeman said more than 550 childhood sex abuse survivors have done so.

“Before that you had to be no older than 23, sometimes 21, depending on which kind of claim you had,” Ms. Freeman said by phone last week. “That’s why such an enormous number are coming forward. This has been going on for decades with no recourse.”

The same day the legislation went into effect, the Diocese of Rockville Centre released a statement saying it “prays for healing as [the] Child Victims Act opens.”

“The Diocese of Rockville Centre takes seriously and investigates all allegations of sexual abuse,” the statement reads. “We commend the courage of those who have and will come forward to share their experiences and wish to see justice, healing, and reconciliation prevail.”

The diocese said it expects “the daily work of [its] many ministries to continue uninterrupted.” It said its bishop, the Most Rev. John O. Barres, has been working with legal experts and financial experts to prepare the church for the anticipated onslaught of complaints.

“Our church continues to suffer as a result of past sins of sexual abuse of minors,” Bishop Barres said in a statement. “Victim survivors of abuse and their families also continue to carry the terrible effects of that abuse.”

Ms. Freeman said it took a long time to serve the diocese and various parishes with lawsuits. “Most of these defendants have declined to assist us in that way,” she said.

According to the complaint against St. Andrew, two priests, Father William Burke and Father Alfred Soave, “used their positions as priests to groom and to sexually abuse” the plaintiff when he was between the ages of 8 and 14. The plaintiff and his family “trusted Fr. Burke and Fr. Soave because the diocese and St. Andrew held them out as people who were safe and could be trusted,” the complaint states.

A representative of St. Andrew referred questions to the Diocese of Rockville Centre.

“We’ve heard horrific stories and the volume is highly upsetting,” Ms. Freeman said. “Even though it was expected, it was upsetting. The tragedy is when a person has no opportunity to seek criminal prosecution against their perpetrators. Their only hope for justice is through a civil action, which is what we’re doing.”

In 2017, the Diocese of Rockville Centre initiated the Independent Reconciliation and Compensation Program to “provide a confidential mechanism for survivors to be heard” and “to receive compensation and some measure of healing and justice,” according to its Aug. 14 statement. Some 370 people filed claims with the program, and 277 of them have been compensated with settlements totaling just over $50 million, with a number of them still to be evaluated.