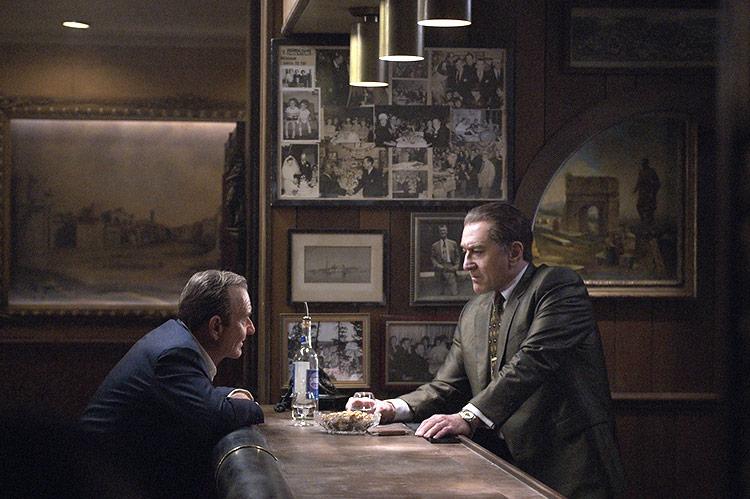 Joe Pesci and Robert De Niro, above, star along with Al Pacino in Martin Scorsese’s “The Irishman,” a film more than three hours long to be screened at this year’s Hamptons International Film Festival.
Netflix
By Jennifer Landes

The Hamptons International Film Festival will screen Martin Scorsese’s “The Irishman” as its Friday Centerpiece film on Oct. 11, and the festival has announced several other titles that will be featured during its main event over Columbus Day weekend.

“The Irishman,” about a mob hit man, is based on “I Heard You Paint Houses,” a novel by Charles Brandt. Robert De Niro, Al Pacino, and Joe Pesci star. In it Frank Sheeran is a World War II vet whose decades-long story dovetails with some of the most famous crime figures of the 20th century and involves the disappearance of the union boss Jimmy Hoffa.

A full slate of Academy Award-nominated directors will be featured in this year’s Spotlight section. Terrence Malick brings “A Hidden Life,” about an Austrian conscientious objector in World War II. Noah Baumbach will be represented at the festival by “Marriage Story,” which tells of a broken marriage and a family that stays together. It stars Scarlett Johansson, Adam Driver, Laura Dern, Alan Alda, and Ray Liotta.

“The Two Popes,” from Fernando Meirelles, the director of “City of God,” is inspired by the last transition of papal power, between Pope Benedict and Pope Francis. “Jojo Rabbit” is yet another World War II-inspired entry, in which Taika Waititi, who wrote and directed it, plays Adolf Hitler in a film about a young German boy with an active imagination whose mother is hiding a Jewish girl in their house.

Celine Sciamma’s period love story, “Portrait of a Lady on Fire,” premiered at Cannes and won the Queer Palm award and best screenplay award. It will be shown at HIFF in the World Cinema Narrative section.

The festival has also shared its films in competition in the narrative and documentary categories. Mati Diop’s “Atlantics” (winner of the Grand Prix at the 2019 Cannes Film Festival), Anke Blonde’s “The Best of Dorien B.,” Jan Ole Gerster’s “Lara,” Andrew Patterson’s “The Vast of Night,” and Hlynur Palmason’s “A White, White Day” will compete in the narrative category.

Anne Chaisson, the festival’s executive director, noted that once again the festival has remained committed “to gender parity in storytelling,” with competitors in a 50-50 ratio of male to female.

Ticket packages for the 2019 festival are now on sale, and individual tickets will go on sale on Oct. 1. The festival previously announced its honorees, opening night film, and other featured films, which are now on its website. This year’s festival will take place from Oct. 10 to Oct. 14.

The festival also announced a new group of films it will screen in partnership with Guild Hall on Saturdays this fall.

This week’s is “Honeyland,” directed by Tamara Kotevska and Ljubomir Stefanov. The documentary follows a 60-year-old woman’s beekeeping and honey-extracting activities in Macedonia, where new neighbors in her rural area are both a balm and a threat to her. The film has won awards for cinematography and originality and the Grand Jury Prize at Sundance.

The Sept. 21 screening will be announced soon. On Sept. 28, “Before You Know It,” by Hannah Pearl Utt, will tell the story of a stage manager living in her childhood apartment above a tiny theater her family operates. Her fellow residents include her sister, a quirky actress; her father, an eccentric playwright, and a preteen niece. Their lives are thrown into chaos by a sudden tragedy that reveals that nothing is quite what they thought it was.

“Monos” will be screened on Oct. 5. Directed by Alejandro Landes, it tracks a young group of Latin American rebels with an American hostage as they survive on a remote mountainside.

Each screening will take place at Guild Hall at 6 p.m. Tickets, which are $15, or $13 for members, are available through the Guild Hall and HIFF websites.