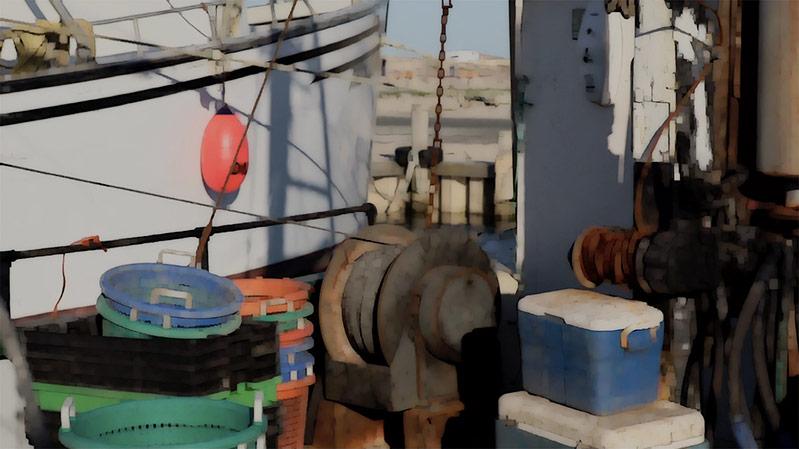 A subtle pixellation is created by the gentle rocking motion of the boats in Peter Campus’s videograph “Eventide.”
By Mark Segal

The Arts Center at Duck Creek in Springs will conclude its 2019 season on Saturday with “Slack Tide,” a group exhibition featuring seven artists who work in a variety of mediums. The term “slack tide” describes a state between flood and ebb tide, when little to no tidal movement is detectable.

“The title came to me first,” said the show’s guest curator, Matthew Nichols, an associate professor of art history at Christie’s Education in New York City and a friend and colleague of Jess Frost, Duck Creek’s executive director. “Slack Tide” is the venue’s first thematic exhibition.

“I found it intriguing that there’s a conceptual dimension to a slack tide that allowed me not to be so literal in my approach to the exhibition,” said Mr. Nichols. “I didn’t feel obligated just to have images of the ocean or bodies of water, although some water does figure into the show. I became more interested in the dynamics of ebb and flow and also the notion of short-lived equilibrium.”

“ ‘Videograph’ is peter’s word,” said Mr. Nichols. “I think he conceives of it as a combination of a video and a photograph.”

“Eventide” records the gentle rocking of two fishing boats docked in Shinnecock Bay. The image is framed and cropped like a photograph; there is no panning, no camera movement. The soundtrack consists of the groaning of the rigging and the gurgling of the water. Due to the movement of the boats, the image has a pixilation that lends it a hypnotic and slightly abstract quality.

Mr. Murphy’s work, “I thought it was a ladder, she said it was a serpent,” is a sculpture assembled from dozens of LED matrix panels that snake across the floor. Instead of text, the panels present abstract patterns of light programmed to create broken lines that stream in a way that suggests opposing currents.

Ms. Shin’s “Surface Tension” is a diptych fashioned from plywood sheets originally deployed at New York construction sites to protect pedestrians. She paints over the graffiti and other markings with similar shades of blue to create a “visual record of expression and redaction [that] engages the eye with the same push/pull dynamics of an Abstract Expressionist painting,” according to Mr. Nichols.

Acrylic yarn is Mr. Larson’s material of choice. While his pieces appear to be woven textiles, they are in fact carefully arranged patterns of yarn that cling to Velcro-covered supports. Each piece begins with a single strand laid down in a sinuous line that determines the rest of the composition.

Ms. Yamaoka pours urethane resin onto various supports, including Mylar and vinyl. Once poured onto the horizontal plane, the medium can produce unexpected eddies and occlusions as it cures. Though synthetic, the glossy monochromes suggest bodies of water, and the viewer’s reflection can also appear in the work.

Ms. Hinant’s curiously titled “Keeping Up With the Kardashians” consists of Ikea’s Istad resealable plastic bags filled with water and placed on the floor. While the choice of Ikea’s turquoise branding is in part a critique of consumer culture, the bags of water represent the fragile nature of equilibrium.

Ms. Sandin’s sculpture is based on the rattleback, a semi-ellipsoidal top that will rotate on its axis in a preferred direction but if spun the opposite way will wobble and pause before shifting direction. Like the ebb and flow of tides, the untitled sculpture is governed by the laws of physics but retains an element of mystery.

While much of the work expresses the show’s themes metaphorically, Mr. campus’s piece not only captures the literal movement of the tides but his larger body of videographs also “provide a sort of regional ballast or anchor to the show” in that they focus on the landscapes and seascapes of Eastern Long Island.

“Slack Tide” will open Saturday with a reception from 5 to 7 p.m. and continue through Oct. 13.