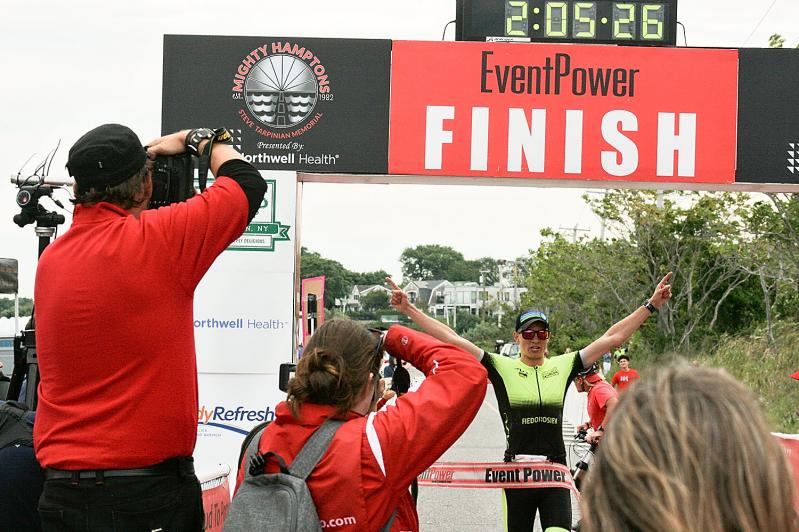 The winner, a native of Ukraine who now is pursuing a master’s degree and coaching the women’s triathlon at Wagner College on Staten Island, bested by about two minutes last year’s winning time.
Jack Graves
By Jack Graves

The water was choppy, the bike ride was hilly and at times windy, but the cloudy and cool weather was much to everyone’s liking at the Steve Tarpinian Memorial Mighty Hamptons Triathlon in Noyac Sunday.

And the times were good too, the men’s and women’s winners’ bettering last year’s by quite a bit.

Roman Fedosieiev, a 27-year-old native of Ukraine, an assistant women’s triathlon coach at Wagner College on Staten Island, where he is pursuing a master’s degree in media management, won, besting a field of close to 400, in 2 hours, 5 minutes, and 28.8 seconds.

“It was choppy going out [on the .93-mile] swim, but going back was better,” the winner, who was third out of the water, said after having crossed the EventPower finish line. The 24.8-mile bike leg, he said, “was tough, but I like tough. . . . I felt very good today.”

He and Joris Esch, a native of Belgium living in New York City now, who wound up seventh, came in together on the bike, but Fedosieiev was unheaded on the 10K run, though Billy Holl of Blue Point, the runner-up, who is sponsored by Western Beef, trailed the Ukrainian native by only 26 seconds at the end.

It was the first time at Mighty Hamptons for Fedosieiev, who bettered last year’s winning time by two-plus-minutes, and the second for Holl, who said that “when I was here the first time, two or three years ago, I took a wrong turn on the bike.”

The women’s winner, and 13th over all, was Hallee Foster, 26, in 2:20:06.9, clipping three minutes off last year’s winning time. A former Brown University equestrian, Foster also was in her Mighty Hamptons debut. Olivia Ebenstein, 16, a Ward Melville High School junior ranked 41st nationally in the junior elite division, was third (and 28th over all) in 2:26:12.8. She was fifth here last year, she said.

Ebenstein runs cross-country and track at Ward Melville, and swims long-distance races, she said, with the Three Village Swim Club.

It was only the second triathlon for East Hampton’s Neil Falkenhan, a frequent winner of Body Tech’s “pump and run” competitions in the recent past, and of the Old Montauk Athletic Club’s Brewathlon. He did creditably, finishing 32nd in 2:27:57.2.

“I was 19th in the [Montauk Lighthouse] sprint triathlon in July, but the jump from sprint to Olympic distances is very tough. I felt good on the bike and the run, but the swim [his time was 35:55] was difficult.” He’d only begun swimming five months ago, he said.

Having proved himself in bench-pressing and rowing (his 5,000-meter row time at last November’s Brewathlon was said to be only 18 seconds shy of the world record for his age group) the 35-year-old had wanted to try something new, though, at 190 pounds, his well-muscled build was probably not ideal for triathloning, he acknowledged.

Alex Eletto, 22, who is autistic, was another Mighty Hamptons first-timer. His father, Vince, an EventPower staff member who lives in Stony Brook, said the tripartite sport concentrated his son’s mind and kept him healthy. His wife, Tina, Vince Eletto said, helped their son with his transitions from the swim to the bike and from the bike to the run. Alex Eletto finished 35th, in 2:28:48.6.

The For U Steve relay team of Paul Milazzo (swim), Antoine Waldo (bike), and Panadda Tumino (run) raced in memory of Steve Tarpinian, the late internationally known swimming coach, and a leading triathlon promoter on Long Island, who rescued Mighty Hamptons from “extinction,” his life partner, Jean Mellano, said, by buying it from Southampton Hospital in the 1990s.

Tumino and Waldo help Michelle Del Giorno oversee a boxing group for those with Parkinson’s disease at Sag Harbor’s Epic Martial Arts studio. Mellano, who has the disease, said she’d found the boxing sessions to be quite effective. “I think I might be worse without them,” she said. Drumming too she had found to be helpful, though as yet she’s found no fellow drummers with whom to form a drummers’ circle on the North Fork, where she lives.

“I was challenged,” Waldo said, when asked how the bike leg went. “I’ve never biked 20 miles before,” and next time, he added, looking down at his basketball sneakers, “I’ve got to get the right shoes.”

Back to the women, that group’s fourth-place finisher, Ella Genasci Smith, 26, who has enjoyed very good results in her first year of competition, slashed 15 minutes from her time here last fall — an improvement all the more noteworthy given the fact that she holds down a full-time job in New York City.

A Brooklynite now, she grew up, she said, in Hong Kong, where she played netball on Hong Kong’s under-21 national team. “It’s like basketball, but once you have the ball you can’t move,” she said with a smile. “You can see it on YouTube,” she said, sensing that this writer was a bit perplexed.