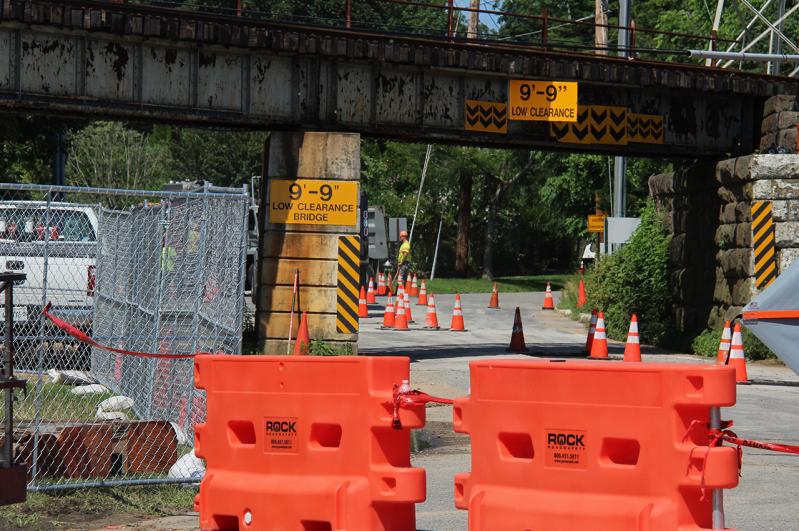 Hook Mill Road has been closed to traffic as a construction crew prepares to remove the trestles across Accabonac Road and North Main Street.
Durell Godfrey
By Jamie Bufalino

The Long Island Rail Road announced this week that exceptions to the closure will be made on weekends, when a single one-way lane from Accabonac Road to Methodist Lane will be available to those attending services at the East Hampton Methodist Church.

The low trestles, which over the years have been the bane of high trucks, will be raised from 11 to 14 feet when new bridges are installed this fall. The first phase of the project began last August with the construction of retaining walls, one of which remains to be built on the south side of North Main Street.

At a village board meeting in June, Daniel Knote, an L.I.R.R. project manager, explained that because of the topography, a support system — a series of sheeting piles — would have to be installed before the last retaining wall could be built. “Because it’s a deeper dig, we need to put in a support for excavation to keep our trains and tracks safe, and to keep the community and village streets safe,” he said.

As the piles were pounded into the ground last month, the work reverberated through the neighborhood. “Having a 300-year-old house, it did vibrate the heck out of our house,” said Bruce A.T. Siska, an architect who lives near the North Main Street trestle. “A little noise, a little vibration wakes us up out of the norm,” he said. “I’ll look on the bright side, right?”

Farther east on North Main, at East Hampton Flowers, Michael Lucci, the owner, said he too could hear the noise and feel the vibrations, but didn’t find them too disruptive. Jennifer Gomez, the owner of Ciao Bella, a clothing store next door, also said the noise was not a big deal.

Mr. Lucci was more concerned about the traffic snarls that develop thanks to the closing of Hook Mill Road. On his drive to work, he said, he has seen westbound traffic “50 cars deep” on Accabonac Road.

He had also been worried that his shop, which is between Collins Avenue and Talmage Lane, would be inaccessible by car when the bridges are replaced. Chief of Police Michael Tracey and Vanessa Lockel, a government and community affairs liaison with the L.I.R.R., ­have met with him to discuss the construction plans, he said, and during that conversation Ms. Lockel assured him that that stretch of North Main Street would remain open. “She said the road would be closed closer to the bridge,” Mr. Lucci said.

A representative from the Metropolitan Transit Authority, which oversees the L.I.R.R., said yesterday that the installation of the support system for the retaining wall was still underway, but could not confirm whether more pile-driving would be necessary. Mr. Siska, however, said he had met with railroad representatives on Friday, and that they told him that phase of the work had ended last week.

Construction of the final retaining wall will resume in a few weeks, the M.T.A. representative said, and next week the building of new foundations for both bridges will begin. The foundations will consist of four six-foot-round caissons for each structure, Mr. Knote had told the village board in June. Drilling the caissons, which will go down about 75 feet, will begin in September.

“The caisson work may be a little noisy,” Ms. Lockel said at the time, “but these guys are professional and know how to mitigate that.”