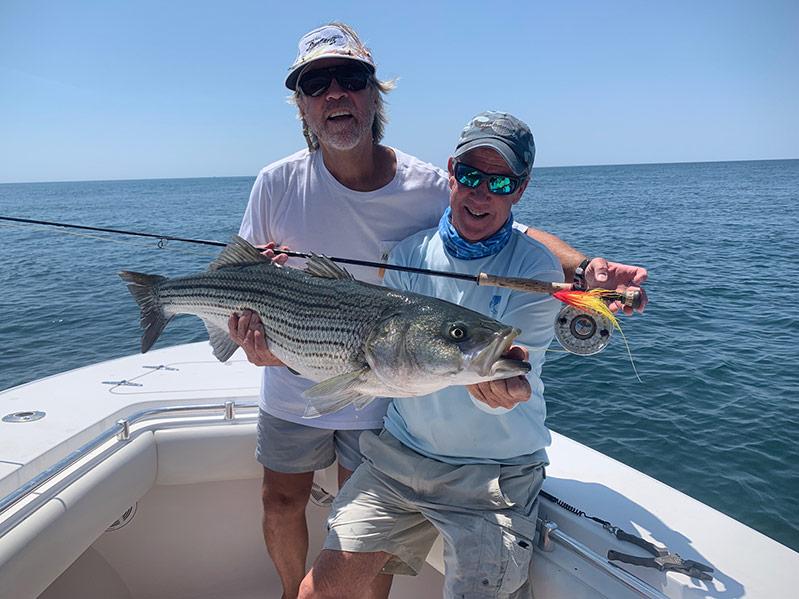 Once again, sharks have been making headline news. Whether it’s an aerial photo of one lurking close to a popular beach, a scrape with a bather, or a specimen caught from shore, every incident seems to be amplified on social media and other platforms more than ever before.

While it’s not fake news, people need to understand that when they go in the water, they are entering the sharks’ world, and while attacks are extremely rare, they do happen. That said, you have a significantly better chance of getting hit by lightning than having a face-to-face with Jaws.

In addition to the increased media attention they are currently receiving, sharks have become stars in their own right as they continue to take a big bite of the ratings pie when they appear on television. Advertisers love them, as do many in the general public.

For better or worse, I usually take in a few hours of Shark Week, the weeklong summer running of programs and docudramas that concluded on Sunday on the Discovery Channel. Last year, Shark Week made a big ratings splash for its 30th anniversary, reaching nearly 35 million viewers. That compares to 9.5 million people who watched the Democratic debates last week. A rather telling figure on where some of our priorities lie these days.

While the debates amused and frustrated me at the same time, I felt the same about some of the shark programs. Although some contained interesting research, it seemed that the Discovery Channel has begun to reach its own “jump the shark” moments, in which far-fetched ideas and celebrities are included merely for the sake of novelty.

Shaquille O’Neal swimming with sharks? Well, okay, Shaq was bigger than most of the predators he dealt with, but I was more amazed that a wetsuit was even available to fit his more than ample height and girth.

But Guy Fieri, the spikey-haired, carnival barker of Food Network fame (or shame)? Really? Damon Wayans Jr.? Rob Gronkowski? The list goes on. Sadly, it’s probably only a matter of time before they enlist Henry Winkler to reprise his role as Arthur Fonzarelli to actually jump the shark once again for old times’ sake. Don’t do it, Fonzie. Those were not happy days.

While we are on the topic of sharks, if you fish for them from your own boat, you must apply for the New York State Recreational Marine Fishing Registry and a National Marine Fisheries Service Highly Migratory Species (H.M.S.) Permit. In addition, NOAA Fisheries has increased the recreational minimum size limit for shortfin mako shark caught in federal waters (3 to 200 miles offshore) to 71 inches (fork length) for male sharks, and 83 inches for female sharks. You can visit NOAA’s website for information on how to determine the sex of a shark.

On the fishing scene itself, the typical summertime pattern of mid-August continues. Striped bass fishing remains a hit or miss affair, but some anglers have scored well. Tim Mott of Sag Harbor, landed a personal best 54-pound lunker on the charter boat Oh Brother! out of Montauk on the morning of July 31. Not to be undone, a 52-pound fish was also landed on the same excursion. Some big bluefish are also mixing in with the stripers.

“Fluke fishing has been pretty good but it is also dependent on the drift,” said Capt. Mark Ryckman of the Montauk Star. “Things should improve as we come off the new moon and they start to feed again.” Ryckman has been fishing deeper water where larger fish have been in greater residence. To wit, an angler on the Miss Montauk II bested a 12-pound doormat on Friday’s trip.

On the hunt for tuna? Bluefins continue to be plentiful at the Coimbra wreck southwest of Montauk, while yellowfins, bigeyes, mahimahi, and white marlin have been consistent farther off to the east. Placid sea conditions the past few weeks have made the trek manageable enough for even smaller boats to get in on the action.

Still no striped bass have been weighed in for the inaugural Paulie’s Tackle and Toad’s One Shot striped bass surf tournament, organized by Paul Apostolides, the owner of Paulie’s Tackle Shop in Montauk, and the local fishing hound, Gary (Toad) Stephens. For a $25 entry fee, anglers can weigh in a striped bass caught from the surf that must be at least 30 pounds.

“John Bruno said he had a contender the other night while on the southside, but a big shark took it off his stringer,” said Apostolides from his establishment in downtown Montauk, where anglers can fill out an application. “He said that there were two big dusky sharks cruising around that kept him on his rock for a while. Can’t say I blame him.”

Anglers can weigh in only one striper at Apostolides’s shop between now and Thanksgiving Day weekend. If you happen to land and weigh in a 35-pound fish, but capture one later in the season that’s larger, forget about it. It won’t count. There is also a 48-hour sit-out period when you enter the tournament to help eradicate anyone who tries to beat the system.

A total of $10,000 in prize money will be awarded. “We will have 70 percent of the money go to the largest fish landed from the beach in waders,” he explained. “The other 30 percent will go to the heaviest fish in the wetsuit division.”

Sounding more like a waiter in a restaurant reciting the daily specials, Harvey Bennett, the owner of the Tackle Shop in Amagansett, was anxious to list the different kinds of fish currently on the prowl in local waters. “You name it, and you can most likely catch it,” he explained. “The snappers are in abundance and are getting bigger by the day, while blowfish, kingfish, and porgy are keeping many people happy.”

Bennett also said that striped bass have been making their presence felt off the beaches of Amagansett, and that the first reports of Atlantic bonito have been confirmed in and around Montauk. “Fluke and sea bass are doing fine, too,” he said. “And a six-foot thresher shark was landed by a bass fisherman on Friday off of Amagansett.”

“Big blowfish are in Three Mile Harbor,” said a smiling Sebastian Gorgone at Mrs. Sam’s Bait and Tackle in East Hampton. “Plus, snappers are around too.” Gorgone added that several of his customers have returned from Montauk with large fluke in their coolers, while porgies and kingfish remain in good supply. “And the action in Plum Gut has been very good of late with blues and bass,” he said.

“Bluefish are still thick on the incoming tide at Jessup’s Neck,” said Ken Morse at Tight Lines Tackle in Sag Harbor. “Porgies and weakfish are at buoy 16 in Noyac Bay, while some bass and blues have shown up at dusk and the early morning at the various ocean beaches. It’s summertime fishing for sure.”

It only lasted for two weeks, but the daily trip limit for commercial fishing summer flounder is now set at 140 pounds. It was previously 240 pounds. The trip limit will remain in effect until further notice.