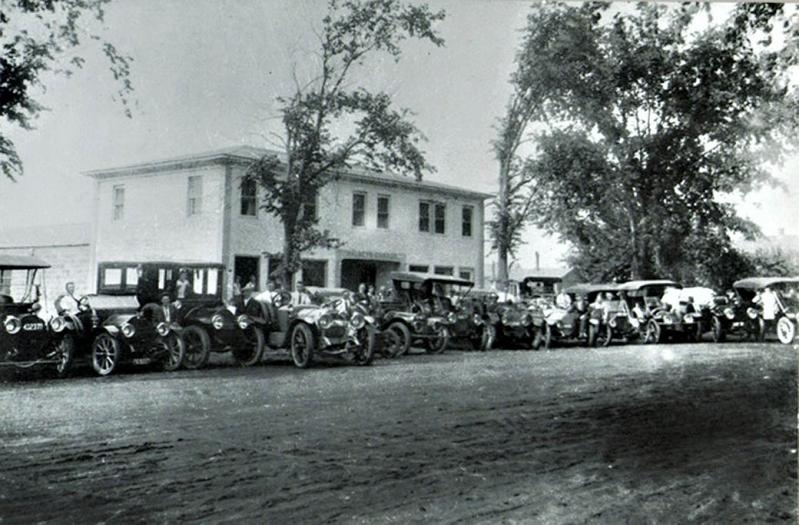 In business for over 50 years in East Hampton, Halsey’s Garage, seen in this image from 1918, rose from humble beginnings but seemed to find itself in the right place at the right time.

The proprietor, Isaac Youngs Halsey (often referred to as I.Y. Halsey), was born in Westhampton Beach on Nov. 13, 1882, to Frank C. and Maria Isabelle Youngs Halsey. He grew up in Southampton and moved to East Hampton with his family as a teenager.

As a young man, he attended machine shop school in Providence, R.I., before opening a small bicycle repair shop in 1905 behind Muchmore’s drugstore, which is now White’s Apothecary, at 81 Main Street in East Hampton. The following year, Halsey broke ground for his automobile garage on Newtown Lane.

In one of the shop’s earliest advertisements, from 1908, Halsey’s boasted of having “3,300 square feet of concrete floor space in the garage, and an up-to-date machine shop.” In 1910, G.A. Eldredge began construction of an automobile storage building that was 22 feet by 88 feet with 11 auto stalls.

It certainly seemed as if the shop was thriving, until it burned down later that summer. According to Donald Miller Halsey, I.Y. Halsey’s son, the original structure was a wooden building “sheathed in tin,” which was common for the time. As a replacement, a larger structure was built entirely out of concrete, and Halsey started advertising his new garage as fireproof in 1911. Over time, several additions were made to the building.

In spite of the setbacks, I.Y. Halsey opened his business at a time when automobiles were becoming more prevalent, and East Hampton’s wealthy summer residents were bringing their cars out from New York City. Aside from regular vehicle maintenance and repair, Halsey saw a need for storage, and he would house up to 120 automobiles in the winter for summer residents who decided to leave their cars behind until next season.

Halsey owned the garage until 1954 and died the following year. At the time of his death, Halsey’s Garage was one of the largest buildings in East Hampton, with more than 17,000 square feet of space on one floor and about 40,000 square feet of parking space surrounding it.

Today, Stop and Shop occupies the place where Halsey’s Garage once stood.

Pet Food, to Give and to Get
Plan to Repave Part of Route 27 in Montauk
Attention, Comic Book Lovers
END_OF_DOCUMENT_TOKEN_TO_BE_REPLACED