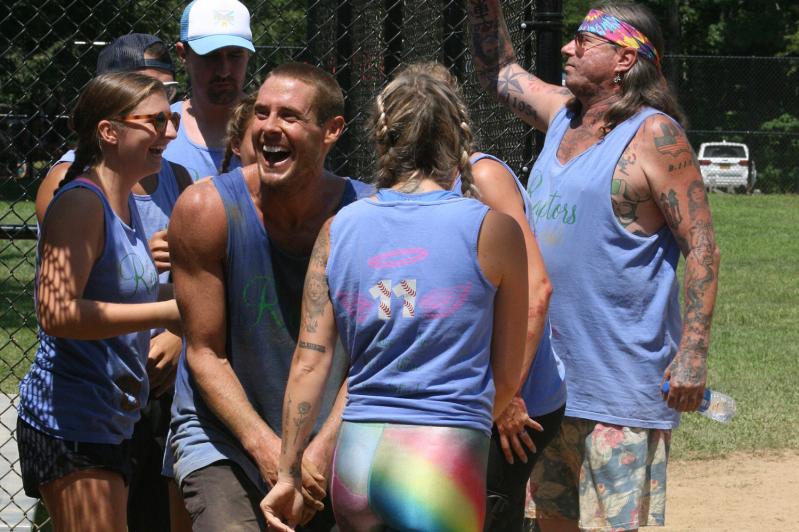 Colin Davis and his Raptors teammates were their usual buoyant selves at the Travis Field memorial scholarship softball tournament, and, for the second year in a row, were the runners-up to the Pink Panthers.
Jack Graves
By Jack Graves

The Pink Panthers, a team made of up the late Travis Field’s schoolmates and friends, made it four in a row at the popular softball tournament played in his name this past week at the Terry King ball field in Amagansett.

The Raptors, a fun-loving group from Montauk, were, as was the case last year, the runner-up, losing 15-9 to the Panthers in Sunday evening’s A bracket final — a game in which the powerful Panthers hit only one homer, a three-run shot by the lanky shortstop, Sawyer Wirth.

The same two teams played in a semifinal matchup earlier in the day, a much closer game that was won 10-9 by the Panthers thanks to a walk-off three-run home run by Matt Brierley, who was greeted by gleeful teammates after crossing the plate.

The Raptors had victory within their grasp, having taken a 9-4 lead into the bottom half of the semi’s seventh, but, with the score 9-5, a short-hop error on a line drive into shallow left, which resulted in the ball crossing into dead ball territory, proved to be pivotal, as the play-by-play announcer Bryan Anderson Sr. said, inasmuch as it allowed one run to score and put another runner on third base. A single to right by Andy Tuthill, a hard-hitting lefty who had earlier hit a three-run homer, made it 9-7, and a few minutes later, with two runners on and one out, Brierley’s towering drive into the parking lot beyond the left-center-field fence capped the comeback.

As the Panthers were going wild, the usually-buoyant Raptors, whose pitcher, Colin Davis, had raised a three-foot-high cloud of dust sliding safely into second during the Raptors’ rapturous four-run seventh, were momentarily stunned. But only momentarily. They bounced back soon after with a win over Hampton Glass, which put them in the final.

There were eight teams in the A bracket, nine in the B bracket, which was won by Action Irrigation, Pat Harden’s team, on which Tom Thorsen, Dylan Sanicola, and Ryan Balnis, among others, played. Irrigation defeated Kyle Mannix’s team, the Jetty Grinders, 14-11 in the final, though the Grinders, according to Mike Graham, who took over the tournament director reins this year from Bryan Anderson Jr., said the Grinders had made a game of it with seven runs in their last at-bat.

Graham said the scholarship winners are to reflect the late Travis Field’s qualities, athleticism and a desire to be of service to this community being two of them.

While the net proceeds wouldn’t be known “for a couple of days,” Graham said the four-day tournament, which had 50 sponsors and numerous volunteers, among them members of Travis Field’s family, had been “extremely successful.”

Elian Abreu had pitched, he said, giving up one hit and two runs, both unearned, over six innings, while walking three and striking out 10.

Matthews’s 340-foot solo home run in the fourth inning treated the Bonackers to the lead, but Pat-Med came back with two runs on one hit in the bottom of the sixth, which proved to be the margin of victory.

Describing Pat-Med’s sixth, Alversa said, “It began with a comebacker that Elian bobbled, the next kid reached safely, and, after a strikeout, a walk loaded the bases. Their two runs scored on a dribbler up the middle that was mishandled.”

Patchogue-Medford, which went on to win 10-1 in the final — the third year in a row that it had won the playoff championship — finished the season at 16-1-1, said Alversa, who added that East Hampton’s record was 10-8.

Meanwhile, East Hampton’s 12-U team — the same one that had been a District 36 Little League finalist (after having won the district championship in 2018) won the Brookhaven league’s 12-U playoff championship, finishing at 14-2.

“It was a total team effort,” said the coach, Henry Meyer, who assists Alversa with East Hampton’s varsity. “They played good ball; they executed the fundamentals well.”

The team is to play in a seven-game tournament in the Oneonta-Coopers­town area this week. “There will be skills competitions too,” said Meyer, “a home run derby, fastest player. . . .”