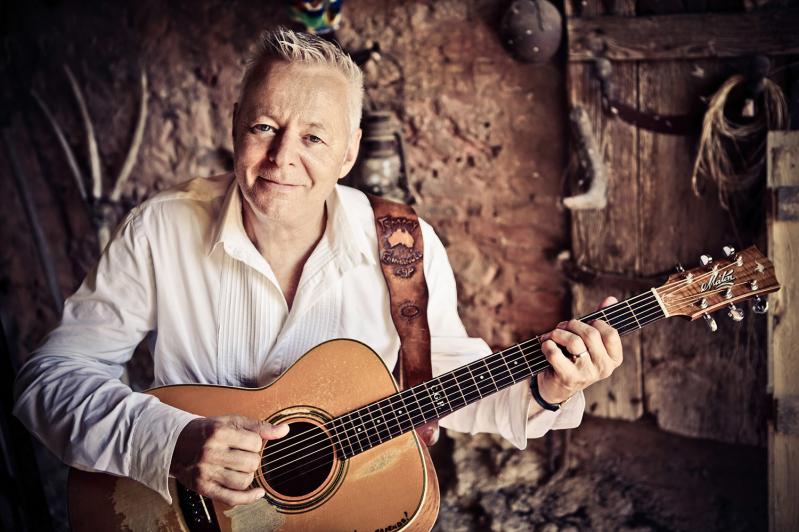 The guitarist Tommy Emmanuel “can do things on the instrument that seem impossible,” said G.E. Smith, who will host his Portraits series with Mr. Emmanuel and Amy Helm on Tuesday.
By Christopher Walsh

The sounds of America are ringing out at Guild Hall this summer. Last month, the arts and cultural center’s second annual Guitar Masters Festival saw intimate performances by the likes of Buddy Guy, the Allman Betts Band, and Roseanne Cash, and the blues phenomenon J.D. Simo opening for the progeny of the Allman Brothers Band.

Fans of acoustic stringed instruments and the human voice will not want to miss the action in store on Tuesday at 8 p.m. The guitarist G.E. Smith, who lives in Amagansett, will host Tommy Emmanuel and Amy Helm in the next edition of his Portraits series, which is produced by Taylor Barton.

A freewheeling format that incorporates music, storytelling, and spontaneity, Mr. Smith and his Portraits guests find or forge common ground, producing unique musical moments. Tuesday’s event pairs an Australian guitarist for whom American music fundamentally shaped his life with the daughter of the late Levon Helm, drummer, vocalist, and driving force of the Band.

Ms. Helm was a member of Ollabelle, a New York group whose 2004 debut was produced by T-Bone Burnett. She has since released the albums “Didn’t It Rain,” in 2015, and last year’s “This Too Shall Light.”

Mr. Emmanuel, a four-time winner of Australia’s Best Guitarist Award, incorporates blues, country, rock ’n’ roll, classical, and Spanish music in a style marked by both an astonishing technical mastery of the instrument and unerring melodicism and feeling.

“He is just one of the best guitar players I’ve ever seen,” Mr. Smith said of Mr. Emmanuel. “The amazing thing about him is no matter what style you hear him play, this guy’s deep in jazz, country, folkie. . . . He is, more than almost anyone I’ve heard, completely at home in every style. I know a lot of songs; he knows way more. And he just takes joy in his playing, great joy.”

Mr. Emmanuel “can also do things technically on the instrument . . . that seem impossible,” Mr. Smith said. “They talk about the 10,000 hours” of deliberate practice to attain mastery in any field. For Mr. Emmanuel, “That was just the warm-up.”

“I like all kinds of music,” Mr. Emmanuel said last week from Los Angeles, where he was mixing new music recorded days earlier in Nashville. “I don’t read music; I never had lessons. I’ve just been hungry for knowledge and experience since I was 3. That hasn’t changed.”

His earliest memories include the music of Jimmy Rogers, Hank Williams, and Don Gibson, “all that early music that came out of America.” He heard Merle Travis and Chet Atkins in the early 1960s. “They blew my mind and gave me a direction I wanted to go.”

“I get the same mojo from Itzhak Perlman as I do from Ray Charles,” Mr. Emmanuel said. “The messenger is whoever the universe sends,” he said, referring as an example to the influence of the blues guitarist Albert King on Stevie Ray Vaughan. Vaughan “was a messenger, saying it his own way, but it was the same message. As a musician, you’ve got to take it to the people and blow their minds, get them interested in it. The next generation will take and run with it, with whatever they’re going to add in theirs.”

Ms. Helm is doing just that as a recording and performing artist. Yes, she told this reporter, she, like the rest of her generation, listened to Run-DMC and the Beastie Boys, “but also discovered ‘Music From Big Pink,’ ” the Band’s debut album from 1968, “when I was, like, 14. I was listening to all of it at the same time. I have a vivid memory of listening to ‘Big Pink’ on the bus on my Sony Walkman and just falling in love with it, and particularly being completely haunted and amazed by Richard Manuel’s singing.”

Before Ollabelle, she was part of her father’s Barn Burners Blues Band and helped him through a bout of cancer in the mid-1990s. Levon Helm, who died in 2012, “was a sweet, sweet guy,” she agreed. At Levon Helm Studios in Woodstock, N.Y., his memory is celebrated in the Midnight Ramble, an intimate concert series that launched in 2004. “Every time a show starts and I’m onstage, I find myself in awe of the musicianship all around me,” she has said of concerts there. “The Ramble has become a community, a place for people to meet, sing, laugh, trade stories.”

The famous, and the less famous, perform there, she said last week. “We’re trying to keep it a musicians’ place.”

“I’m so psyched about the gig,” Ms. Helm said of the Portraits series. “It’s such a different thing.” A plan is starting to take shape, she said, in which she and Mr. Smith might “really dig into a lot of different material. He’s such a broad player, with so much versatility and range. It would be a lot of fun to find those points of reference and just run with it.”

“What can we expect?” Mr. Emmanuel asked. “I’m not sure, but am going to give you the best I can.”