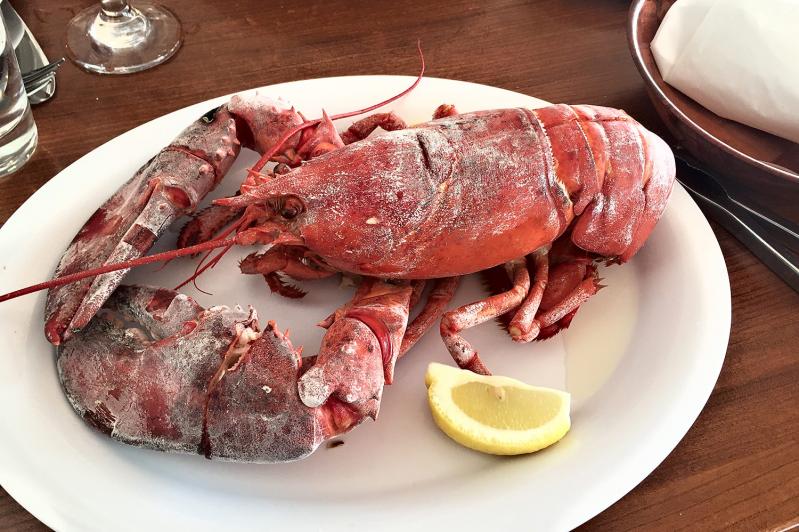 The lobster at Bostwick’s on the Harbor is as good as it gets, sweet and tender, a plump 2-pounder.
Laura Donnelly
By Laura Donnelly

There were a number of new restaurant openings this spring and summer that were worthy of interest and celebration. The consummate professionals of the Honest Man Restaurant Group opened Coche Comedor, a happy, bright place with robustly flavored Mexican food. Jeremy Blutstein spread his wings, sprang from the warm nest of Almond, and tackled the opening of not just Showfish at Gurney’s Star Island Resort but also the more casual Il Forno and the Pool Club. A few famous chefs have made appearances: Terrance Brennan helped open Blu Mar in Southampton but departed before July 4th weekend (ouch!), and Sam Talbot is ably turning out seafood delights at Morty’s Oyster Stand on Napeague. Paola’s on Pantigo is popular, and K Pasa and Ed’s Lobster Bar are welcome additions to Sag Harbor.

But to many, yours truly included, the most exciting, happy-news opening, or more like return-to-from-whence-they-came, was Bostwick’s on the Harbor. Bostwick’s Chowder House on Pantigo Road remains, but Chris Eggert and Kevin Boles have returned to 39 Gann Road where they ruled the “good food at a fair price” site from 1997 to 2007.

Bostwick’s on the Harbor has a view that can’t be beat. It is water and land and boats and sunsets, Dayton Island to the left, Sedge to the right, just exquisitely beautiful. There are no reservations, so expect to wait for a table. Or get there at 4:30 for happy hour and get a good table at the frightfully un-chic hour of 5 p.m.

The restaurant is up a set of stairs and has an all-white interior. There is outdoor dining to the left, an outdoor lounge to the right, and a bar in the middle. Toward the interior back wall there are high top tables with mirrors above, a clever way to give everyone in the restaurant an opportunity to enjoy the splendid view. Scattered about there are some black-and-white photographs of crusty, old, bearded fishermen, salty skippers who never heard of Gillette or SPF 50. There is also a big ship’s wheel, lest you forget where you are.

Before your meal, you get some warm sliced bread and butter pats.

We began with baked stuffed clams, steamers, and a Harbor Salad. The baked stuffed clams were excellent, three big ones with chunks of clams, and lots of garlic, parsley, and breadcrumbs. They reminded me of the old Spring Close Restaurant baked clams. The steamers were also excellent, a generous bowlful with a tasty broth-bath and a dish of melted butter for dunking.

The salad was kind of a dud, mostly just because the dressing “local honey and lemon vinaigrette” had no seasoning. Once we added a good dose of salt and pepper and a bit more lemon juice it was better. It was a mixture of Boston lettuce, frisee, endive, radishes, cucumbers, and cherry tomatoes.

For entrees we ordered local fluke, a special of tilefish, and a steamed two-pound lobster. The local fluke was very good and very fresh but just a whisper overcooked. It was nicely seasoned and served on top of a variety of summer vegetables: zucchini, summer squash, corn, peas, and cherry tomatoes. The beurre blanc sauce was lemony and rich and the fish was topped with a variety of fresh herbs, dill, sorrel, purslane (!), fennel, and more. With a crunchy layer of breadcrumbs between the fish and the herbs, this was a lovely dish.

The tilefish special was super duper. The fish was cooked perfectly and was on a bed of smashed purple and yellow fingerling potatoes and creamed Balsam Farms corn. Balsam Farms corn is always good, but this year’s crop tastes like sparkly, little candy kernel stars from heaven, I swear!

The steamed lobster was as good as it gets. It was sweet and tender. Obviously, all lobster is fresh, as in live before it is cooked, but some lobsters spend too much time in a tank before consumption, which causes the meat to shrink inside the shell. They can also shrink themselves before molting but that was not the case with this big lady. She was a plump two-pounder. The lobster was served with nice, fresh, melted salted butter (key), well balanced coleslaw, and an ear of that sweeeeet corn. I probably haven’t ordered a whole lobster in a restaurant in 10 to 20 years because they’re expensive and so easy to prepare at home. This really was the best lobster I have tasted in many years.

The service on the night of our visit was excellent, our waitress, Stacy, was as sweet as could be. Working in a fast-paced, popular, casual, crowded place like this is not easy; there are toddlers treating the dining room like a cross between the Bridgehampton Race Circuit and a mudpie contest. When did this behavior become acceptable, parents and caregivers?

For desserts we tried cheesecake, a s’mores-esque creation, and key lime pie. The cheesecake was okay, not great, but it did have some nice macerated strawberries on top. The s’mores dessert was quite good. It looked like a Yodel or Ring Ding or Ding Dong, I get all those Hostess snacks mixed up. It was log-shaped, coated with good, bittersweet chocolate, and filled with marshmallow on a graham cracker crust. It tasted like a chilled Mallomar cookie, which is not a bad thing to taste like! All of the dessert’s plates had a sprinkling of granulated sugar on them, which made no sense in the humidity, it merely created shiny, sticky specks. The key lime pie was the best of all, super tart with a good graham cracker crust. Bright citrus desserts are always my favorite way to end a seafood meal.

We are glad that Bostwick’s Chowder House remains on the highway, but the return and revival of Bostwick’s to Three Mile Harbor is the best restaurant news of the season. Is it the view? The nice people? The food? It is all of the above, and more.