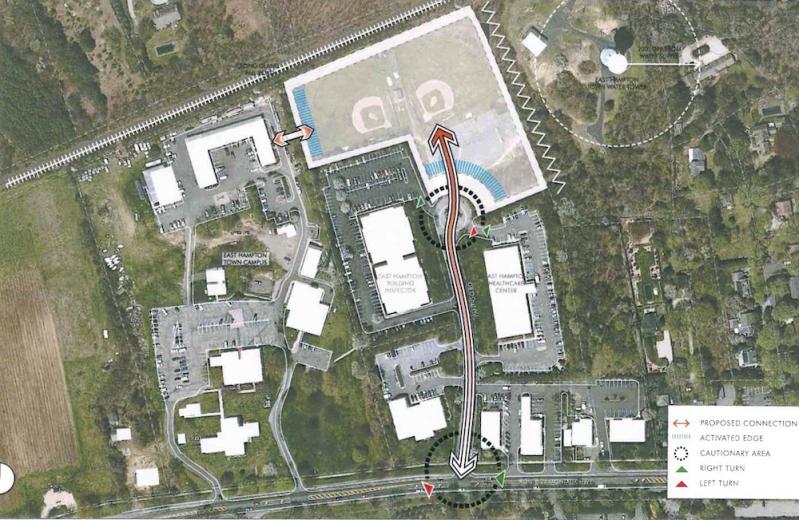 A parcel on Pantigo Place in East Hampton would have to be rezoned in order to accommodate Stony Brook Southampton Hospital's planned emergency-care facility.
Perkins Eastman
By Christopher Walsh

With a new hospital farther west set to eventually replace Stony Brook Southampton Hospital, the effort to clear the way for an emergency care facility in East Hampton is “an emergency itself,” Councilwoman Sylvia Overby said on Tuesday.

Her comments came as the town board discussed the hospital’s request to change the zoning designation of an East Hampton parcel where the new freestanding facility is to be located.

After a public hearing last year and at the urging of officials including the East Hampton Village mayor, the chief of the Montauk Fire Department, and the chairman of the East Hampton Healthcare Foundation, the town board unanimously agreed to a 50-year lease agreement, with optional extensions totaling an additional 49 years, with the Southampton Hospital Association for the parcel at 400 Pantigo Place, near the Town Hall campus and existing medical facilities and offices.

Eric Schantz, a senior planner with the town, told the board on Tuesday that the hospital has requested that the site be rezoned from its present park and conservation designation.

The playing fields, constructed in 1997, are to be relocated, and New York State has agreed to parkland alienation. The association pledged up to $1.7 million for the construction of two new lighted ball fields and associated amenities on property to be provided by the town.

A majority of the board agreed that commercial-industrial zoning was appropriate. Zoning districts, said Supervisor Peter Van Scoyoc, “are a tool in which we can restrict development to compatible uses in compatible locations.” One-acre residential zoning, he said, is a classification “that considers protecting the nature of residential communities” with restrictions as to required setbacks and maximum floor area and lot coverage formulas, “whereas commercial-industrial is less restrictive. Given the development pattern we see here and what’s ­Continued from A1 proposed . . . it seems commercial-industrial zoning is most appropriate. You’re not trying to buffer adjacent property, because they are the same use, the same restrictions surrounding properties have.”

“I don’t necessarily agree with that,” Councilman Jeff Bragman said. A 2016 report prepared for the hospital envisioned an approximately 32,000-square-foot, single-story facility, which Mr. Bragman called “excessive.” He asked Mr. Schantz for a side-by-side visual depiction of a structure on the site based on both one-acre-residential and commercial-industrial designations, which he said would be useful. “It’s not just a question of conforming to the neighborhood around it,” he said. “My concern is how much building we are going to get, what it will look like.”

“I do think this is a project we need to consider important, as an emergency itself,” Ms. Overby said.

“There is no residential property adjacent to the site,” Mr. Van Scoyoc said. “It doesn’t seem appropriate to choose A [residence]. . . . And we should rezone, because we’ve already committed to this path and shown our support to have an emergency satellite location in this portion of town.”

Mr. Schantz said that he would prepare the depictions Mr. Bragman requested.