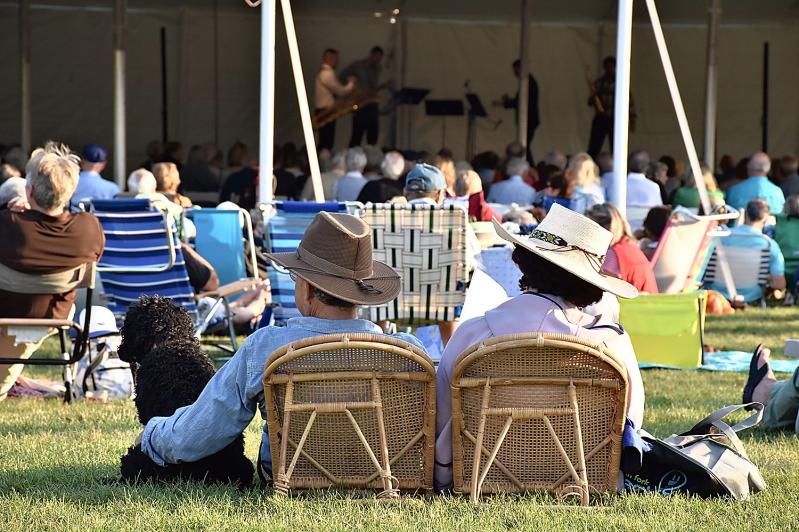 One of the highlights of the summer is the free Bridgehampton Chamber Music Festival concert, held this year outdoors at the Bridgehampton Presbyterian Church.
Michael Lawrence
By Thomas Bohlert

The Bridgehampton Chamber Music Festival kicked off its 36th season on July 21 with two very different programs. The first was a portrait of a composer, “Dvorak in the New World,” narrated by the author, playwright, and Stony Brook professor Roger Rosenblatt. The program centered on a few years (1891-93) when the Czech composer was in the United States, teaching at the National Conservatory of Music in Manhattan, absorbing African-American and Native American music, and working those influences into his already well-established style.

The music was overall very optimistic and bright, yet very substantial. Although it didn’t sound like early American or Aaron Copland, I couldn’t help but think that it had some of the same newness, freshness, and sense of discovery, perhaps a sense of American hopefulness.

Mr. Rosenblatt’s commentary was informative, based on contemporary accounts and letters, with a generous dose of humor and wit. In addition to setting the historical and personal scene for each of the four works presented, he wove an amusing secondary theme about Antonin Dvorak’s predilection for pigeons (you had to be there).

Dvorak’s Sonatina for Violin and Piano was written for his children, although its technical and interpretational demands are quite mature. Its overall character, though, is cheerful and youthful. We heard it in an arrangement for flute and piano, which the composer endorsed, played respectively by Marya Martin, founder and artistic director of the festival, and Jon Kimura Parker. The four movements are very well suited to the flute, and Ms. Martin played with rich, liquid tone, fluency, and insight. The piece started the festival off on a bright, cheerful note. Using the flute version was a good choice for color, since the rest of the concert featured strings.

Referred to as Dvorak’s most American piece, his Quintet in E flat is for two violins, two violas, and cello. He had been well schooled in the Germanic style of composition, to which he added Slavic influences. Now he incorporated two characteristics that he embraced as African-American and Native American: pentatonic (five-note) scales and repetitive rhythms. These are apparent throughout the movements of the quintet, and give it much of its flavor. It may not sound so exotic to our ears today, but it was taking a new direction at the time.

One of the hallmarks of the chamber music festival is bringing together various superb musicians to form an ensemble for a particular concert. In the Quintet, I could definitely feel the electricity generated by the collaboration of these artistic, creative, inspired players: Kristin Lee and Benjamin Baker, violins; Che-Yen Brian Chen and Matthew Lipman, violas, and Nicholas Canellakis, cello.

If you mention Dvorak, many people will think of the New World Symphony, and the tune from its Largo that has become known as “Goin’ Home.” After intermission, this melody was featured in an arrangement for cello and piano. While each of the string players rose to the occasion of their moments of solo lines during the evening, Mr. Canellakis was in the spotlight here for an extended time, and he infused his line with great beauty and nostalgia, and extraordinarily rich tone in the lower, middle, and upper registers of the instrument.

Although there were no piano solos as such, Mr. Parker’s eloquent playing was an equal counterpart to the other instruments throughout, always supporting and complementing, and taking the lead as needed.

The Quintet in A Major for two violins, viola, cello, and piano was written after Dvorak had returned to Bohemia, and it was, as Mr. Rosenblatt said, “a wonderful manifestation of his happiness in his homeland.” The Scherzo and Finale, being marvelously boisterous and rousing, brought the program to an exhilarating close.

Always presenting the established and beloved in chamber music alongside something new, the festival made a perfect choice, going outside the box, in hosting the Project Fusion Saxophone Quartet on July 24. The free concert, held outdoors on the grounds of the Bridgehampton Presbyterian Church, is an annual event. There is a large tent with the stage and chairs for attendees, but people were also invited to take a blanket and chairs, and picnic. There were easily 100 people on the lawn in addition to the near-capacity audience under the tent.

The saxophone is not readily associated with chamber music, so, as if to prove the versatility and proficiency of the instrument and the ensemble, they opened with Bach’s Prelude from Partita No. 3 in E, which was brilliant, joyful, clean, and subtle when called for. It removed any stereotypes about the saxophone being limited to high volume, jazz, or certain other genres. Actually, there were four different instruments, much like a four-part choir — Dannel Espinoza on soprano sax, Matthew Amedio on alto, Michael Sawzin on tenor, and Matt Evans on baritone. The four performers met while studying at the Eastman School of Music in Rochester, N.Y.

More expected within the medium of saxophones was an arrangement of Copland’s “Rhapsody in Blue.” The players and listeners alike reveled in its jazziness — and its clear articulation, phrasing, slurs, accents, and tight ensemble — and this seemed to be the audience’s favorite of the evening.

The spoken comments before “In Memoriam” by Joel Love helped the audience shift into music of more emotional depth, and the involvement that we would need to appreciate it. Written after his father’s death, it portrayed “anger, sadness, and confusion,” followed by a celebration of life. It was movingly depicted and deeply satisfying.

On the festival’s theme of women composers was Clare Shore’s “La Danse” from “Evocations: Four After Matisse.” Commissioned by Mr. Espinoza and premiered in 2014, this movement uses folk tunes along with original material, imitates bagpipes and other folk instruments, and even invited hand-clapping in one section.

The closing three movements from David Maslanka’s “Recitation Book,” a staple of the quartet’s repertoire and on their CD, which they played from memory, continued to show the all-around expressiveness and the incredible capability of the Project Fusion Saxophone Quartet. In addition to the full-volume ensemble sounds, there were plenty of lines for each instrument alone or various combinations of two or three. Overall, the program, with the quartet’s finely honed virtuosity and musicality, would have been excellent by any standard. Given the rarity of a saxophone ensemble, it was definitely a standout.

The Bridgehampton Chamber Music Festival continues with seven more programs through Aug. 18, with its Winds of Change theme highlighting music for wind instruments and women composers. Most of the programs are at the Bridgehampton Presbyterian Church, but tomorrow’s William Brian Little concert, “Music from the Movies,” is in the sculpture garden at the Channing Daughters winery. More information about upcoming programs can be found at bcmf.org and at projectfusionsq.com.