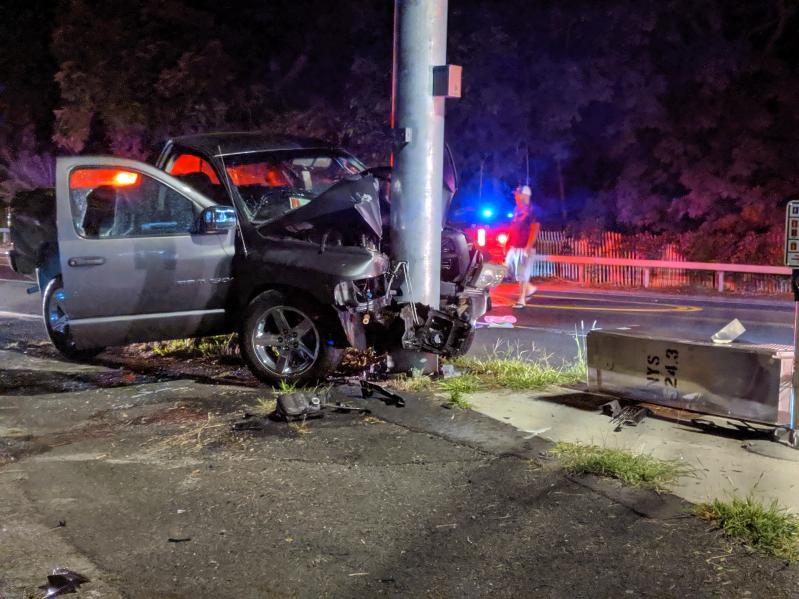 Jhony Chumi-Rodas died after his Dodge pickup truck hit a a steel stanchion that holds up the traffic light on Flanders Road.
Bob Burden
By Taylor K. Vecsey

Jhony Chumi-Rodas, 30, was driving a 2002 Dodge Ram pickup truck on Flanders Road toward Riverhead when he crashed into a steel stanchion that holds up a traffic light just south of Long Neck Boulevard, according to Officer Peter D'Ancona. The light was installed nearly three years ago at the busy intersection, where the U.S.A. gas station is located.

The Flanders Fire Department extricated Mr. Chumi-Rodas from his truck. He was taken to Peconic Bay Medical Center in Riverhead, where he was pronounced dead. Police are still investigating the cause of the crash; Officer D'Ancona said they are awaiting a report from the Suffolk County Medical Examiner's office.

Mr. Chumi-Rodas's family is raising money to send his body back to Ecuador through a GoFundMe.com page. "Jhony was a very cheerful person and always had a smile on his face. He left us with so many unforgettable memories that we will never be able to forget," the page says.

Services will be held on Saturday.