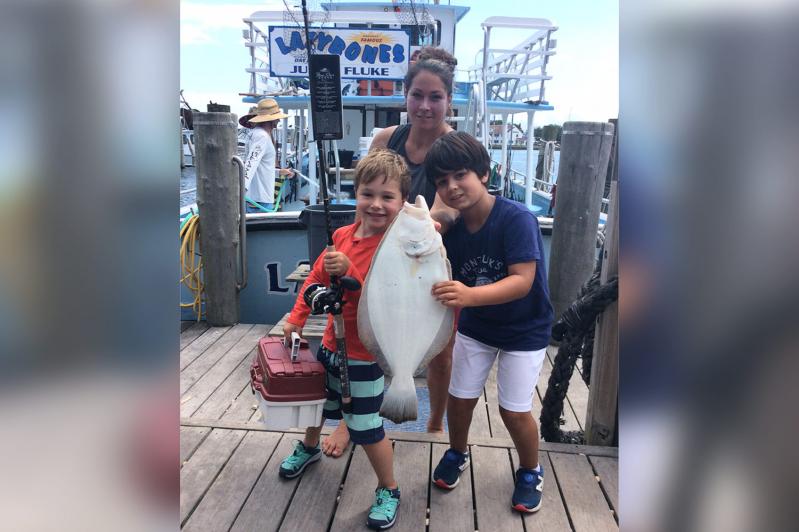 They go by many names. Blow toads, sea squab, chicken of the sea, blowfish, and puffers are just a few of the common ones. But no matter which name you know them by, they usually bring a smile to just about any face.

The whimsical blowfish, with its protruding buck teeth, shiny yellow and green eyes, and unique ability to inflate itself to four times its size when threatened, could easily be the headline act at the finest comedy club. From the outside, they have characteristics and mannerisms that make them accomplished crowd pleasers. They are also excellent and affordable table fare. Not a bad combo.

For whatever reason, in accordance with the whims of Mother Nature, this summer has brought an onslaught of these fish, and they’ve been a welcome sight, especially as their abundance has wavered from feast to famine over several decades. Some years you can’t find a single fish.

“This is the summer of the blow toad,” proclaimed Sebastian Gorgone at Mrs. Sam’s Bait and Tackle in East Hampton. “I’ve sold more blowfish rigs than ever before. Everybody is catching them and they are in many locations. Kids and adults are having a ball.”

Harvey Bennett, the longtime owner of the Tackle Shop in Amagansett, agreed. “They have been around in good numbers the past few years, but this summer has seen some of the best fishing I’ve ever witnessed since the 1960s,” said the hard to impress Bennett, adding that the odd-looking fish with the outsize personality can be found in just about any inner bay, creek, or cove. “They are pretty much everywhere. It’s hard to get away from them at times. And the sizes range from juveniles around two inches up to some monsters nearing a foot in length.”

Unlike most other fish, there are no size or  catch limits for blowfish. However, care should be taken to only retain what’s needed for the table. The bountiful catches we have witnessed this year should serve as a gentle reminder of the lean times of yore.

On the rest of the fishing scene, the early arrival of the Labor Day holiday seems to have caught a few people by surprise. “The summer went quick, and with Labor Day falling so early this year, it feels a bit weird,” said Bennett. “But the fishing has been very good.”

In addition to blowfish, Bennett said that porgies, snappers, and kingfish are in good supply, and that sea bass and fluke have been running well off Napeague and on the south side of Montauk. “And small bass, blues, and hickory shad are in the ocean surf line,” he added. “Turn up the music. Labor Day is here.”

“Business has been great as has the fishing,” said a fatigued yet still smiling Gorgone at his shop on Monday. “Porgies and snappers are plentiful, and kingfish are around in good numbers. It will be interesting to see how the fishing will be when the east winds of the past few days let up later in the week.”

“Small blues are thick at Jessup’s Neck,” noted Ken Morse at Tight Lines Tackle in Sag Harbor. “Still lots of blowfish, kingfish, weakfish, and snappers in the bays.” Morse added that striped bass and larger size bluefish can be found at Plum Gut and the Race. Diamond jigs and rubber shads fished deep have been productive.

Looking for the thresher shark of a lifetime? Now is a good time to try south of Montauk. The charter boat Double D landed a 409-pound whiptail, while Capt. Burt Prince of the Susie E II put his charter onto a hefty 318-pound specimen in recent days. Large schools of bunker remain close to shore and the threshers are enjoying a nice meal not far from Montauk Point.

Farther offshore, blue water fishermen continue to enjoy fine action on mahimahi, yellowfin, albacore, and bigeye tuna, as well and blue and white marlin. In addition, a good showing of swordfish has been landed on the night bite while chunking.

“Fluke fishing has been good, with a nice number of fish between 8 and 10 pounds,” said Dave Reutershan at Westlake Marina in Montauk. “Hopefully this east wind doesn’t mess up the fishing too much.”

Reutershan described the striped bass bite as “elusive at best.” He said that those fishing at night closer to Block Island have had the better success of late. “And porgies and sea bass fishing are also great in the usual spots,” he added.

Commercial fishermen received a bit of good news in the past few days. The daily porgy trip limit was increased to 800 pounds while the daily allotment of bluefish is now set at 2,000 pounds. These trip limits will remain in effect until further notice.

On Sunday, the commercial black sea bass fishery will reopen. The daily trip limit will be set at 50 pounds. Also, on Sunday, recreational anglers will be able to retain seven sea bass per day over 15 inches. Previously, the limit was three fish.