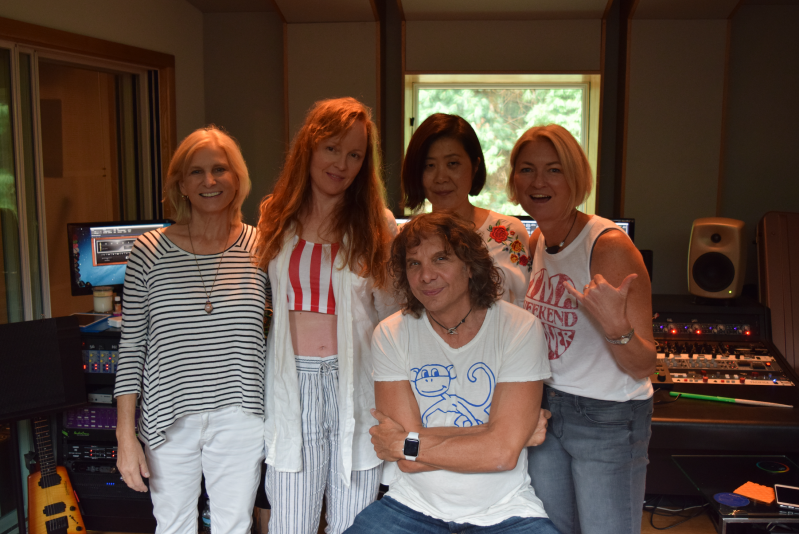 Disappointed but determined after the East Hampton Town Board’s cool reception to the East Hampton Group for Wildlife’s request for a one-weekend-day ban on hunting, a member of the group is planning to communicate support for animal rights by other means.

Yuka Silvera, who has spent much of this year gathering signatures on a petition asking the board for the one-weekend-day ban during hunting season, said that she and her family in Northwest Woods are routinely awakened at 5 a.m. by the sound of gunfire during hunting season. People are afraid to walk in the woods, particularly with their children and pets, when hunters are active, she and other residents have said.

A hobbyist musician — Ms. Silvera plays the electric bass — she assembled a band of like-minded residents in order to record a song to promote the Group for Wildlife’s message. On Friday, the band, which calls itself the Lightworkers, recorded basic tracks of a song called “Wild Life” at MonkMusic Studios in East Hampton, which is owned by the Grammy Award-winning producer and engineer Cynthia Daniels. They plan to complete the recording next month.

“Wild Life,” an early call for animal rights, was written by Paul McCartney. It appeared on the 1971 album of the same name, the first release by Mr. McCartney’s post-Beatles band, Wings. Along with music, Mr. McCartney, who owns a house in Amagansett, is known for his own animal rights activism and vegetarianism.

The mournful song’s lyrics could apply to the ongoing debate in East Hampton: “You’re breathing so hot, a lot of political nonsense in the air / You’re making it hard for the people who live in there. . . . Wildlife, what’s gonna happen to?”

Bill Crain, the Group for Wildlife’s president, had advised Ms. Silvera to take her concerns to the town board, she said this week. “So I did, but the town board did nothing.” Councilman Jeff Bragman asked that the group’s request be included on the board’s Aug. 20 agenda, where his was the lone voice in support of a one-weekend-day ban.

It was during her petition drive, Ms. Silvera said, that she learned of Mr. McCartney’s oft-repeated statement that “If slaughterhouses had glass walls, everyone would be vegetarian.” “Because I play bass for fun, another friend suggested I record the song ‘Wild Life’ to bring awareness,” she said, to the idea of living in harmony with wildlife.

Dianne K. LeVerrier, who lives in East Hampton, is the group’s lead singer and guitarist. “As a lifetime environmentalist, it was a no-brainer when Yuka asked me to sing this song in support of the East Hampton Group for Wildlife,” she said. “Truth be told, I was intimidated by covering a song sung and written by one of the greatest musicians of all time, but the message and emotion resonated so deeply.”

Angela Witte, a Springs resident, played keyboard. “I think taking a walk in nature is good for the soul,” she said, “and not having to think about gunshots or self-protection from a possible accident leaves one free to more clearly hear God’s voice.”

Bob Golden, a professional musician who lives in Springs and Manhattan, played drums. “With Trump perched to weaken the Endangered Species Act, the protection of wildlife is now more important than ever,” he said this week. “This administration is wrong about climate science, and it’s too late to wait for them to do the right thing. That’s why I’m participating in any way I can to help bring wildlife awareness to our community.”

Lightworker, Ms. Silvera said, is a term for a spiritual being with an almost psychic ability to intuit what others are thinking, feeling, or need in order to heal. “I was lucky to have met talented musicians and compassionate friends who joined the band, and the amazing Cynthia Daniels,” she said. “I am so grateful to my friends for their love and generosity. Hopefully, more people will realize animals have rights, too.”