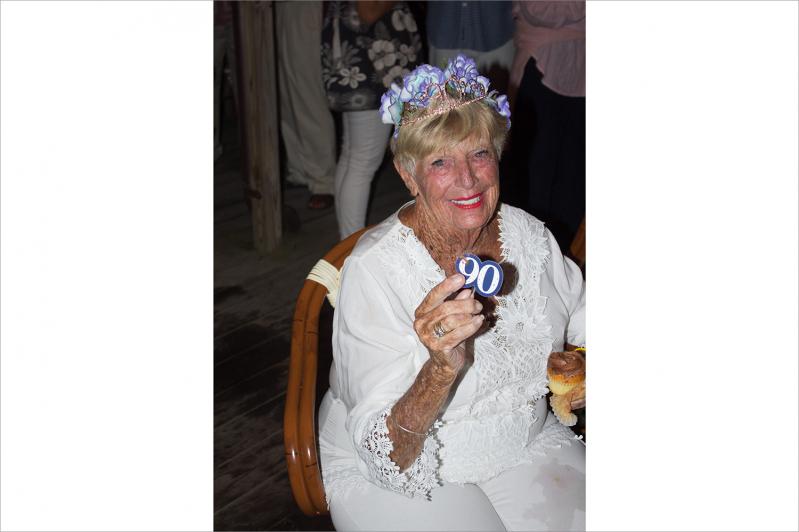 Joan Tulp celebrated her 90th birthday on Aug. 17 at the Amagansett Beach Association.
By Christopher Walsh

A model in Paris, a secretary in Belgium, a columnist and candidate in Brooklyn, and the long-serving, unofficial mayor of Amagansett. “I’ve had an interesting life,” Joan Tulp said on Monday.

Ms. Tulp, one of the hamlet’s more civic-minded citizens, celebrated her 90th birthday on Aug. 17 at the Amagansett Beach Association, with her four sons, daughters-in-law, grandchildren, and many friends attending.

The big day was Aug. 18, “but my wish happened on the 17th,” she said on Monday, over lunch at the A.B.A., where a parking space has been designated for the mayor. “On my bucket list, I always wanted a party for my 90th birthday, so they gave me a party here at the club.”

Ms. Tulp’s son Evan presented a slide show and spoke about his mother at the party. She “was very thrilled that the party went off so well,” another son, Jamie, wrote in an email on Tuesday, “but relieved it was over.”

A native of Rockville Centre, Ms. Tulp arrived in Amagansett in 1950. “My first husband’s aunt owned a house on Indian Wells Highway,” she said. “I got off the train and fell madly in love with Amagansett. For me, it was heaven on earth.”

Living in Brooklyn Heights, she and her husband bought a vacation house in the hamlet in the 1960s. In Brooklyn, she wrote the “Heard on the Heights” column for The Brooklyn Heights Press. “I did one column every week, and got paid $5, which amuses me now. But it was fun.”

As a member of the West Brooklyn Independent Democrats, Ms. Tulp once sought the office of female district leader, an elected position charged with an assembly district’s oversight of the county committee. Eleanor Roosevelt and Senator Herbert H. Lehman endorsed her candidacy, in person, and those of her running mates, the candidates for male district leader and assemblyman, at the Hotel Bossert, which was known as Brooklyn’s Waldorf-Astoria. “That was a big deal in those days,” she said.

She and her husband lived in Paris for three years, where she worked as a model, he for the J. Walter Thompson advertising company. “Then we moved back to the Heights, and then to Antwerp,” near the International Telephone and Telegraph Corporation’s European headquarters. “They looked for American secretaries,” she said, “so I got the job. I wasn’t a very good secretary, but they hired me because I was an American.”

Asked how she had been “elected,” Ms. Tulp said that another reporter had long ago christened her the mayor of Amagansett. “I think that’s how it started,” she said, “and everyone’s called me that ever since. The kids made a big plaque, it’s in my living room: ‘Mayor of Amagansett.’ ”