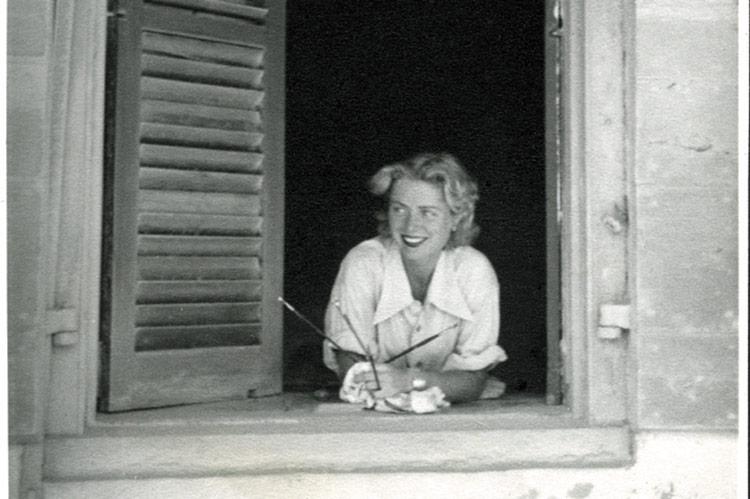 Mary Lee Abbott, a noted American painter and art teacher who was one of the few women artists in the Abstract Expressionist movement of the 1940s and ’50s, died on Friday at the Kanas Center for Hospice Care on Quiogue after a brief illness. The Southampton resident was 98 years old.

“She was a longtime friend and a wonderful, inspiring artist who cared about the artists around her,” said Arlene Bujese, a longtime East Hampton gallery owner who represented the painter from 1990 to 2006. “She was a beautiful person, and it showed in her art. She had generosity of spirit in the truest sense of the word.”

A six-foot-square work by Ms. Abbott, which Ms. Bujese said captures the essence of nature and flowers, hangs in the lobby of the Kanas Center.

The art critic Phyllis Braff has said that “direct translation of sensation is a dominant characteristic of Abbott’s work from 1950 onward.” Ms. Abbott showed at the Museum of Modern Art, in exhibitions such as the Stable Gallery Annuals and Women of Abstract Expressionism, and at the Tanager, Kootz, Tibor de Nagy, and Robert Keen galleries. A friend of Willem de Kooning since 1948, she was one of the few women in The Club, founded by de Kooning. Also among its members were Elaine de Kooning and Perle Fine.

Ms. Abbott’s father, Henry Livermore Abbott, was a decorated submarine commander during World War I and a member of President Theodore Roosevelt’s war cabinet during World War II. She also counted among her ancestors two presidents, John Adams and John Quincy Adams, Mary Ogden Abbott, an aunt who was a famous adventurer, painter, sculptor, horsewoman, and big-game hunter, and Gen. Oswald Herman Ernst, her maternal great-grandfather, who was superintendent at West Point and an engineer on the Panama Canal.

Mary Lee Abbott was born in New York City on July 27, 1921. Her mother, the former Elizabeth Grinnell, was a poet and syndicated columnist for Hearst. Her childhood was one of privilege, and she spent her time between New York City with her mother, Washington, D.C., with her father, and in Concord, Mass., and Southampton with her grandmothers. She attended Miss Chapin’s School in Manhattan as a girl.

But it is said that Ms. Abbott found it all off-putting. She wanted to immerse herself in art and nature, surrounded by animals. She had a particular fondness for reptiles, once saying she wanted to study herpetology, but she did not flourish in her studies and never went to college. By the time she was 17, she was taking advanced classes at the Art Students League with George Grosz; she also studied in Washington, D.C., with Eugene Weiss at the Corcoran Museum School.

Ms. Abbott was a great beauty, and soon after she made her debut at the Colony Club in 1941, she began a career as a model. A charming and outgoing woman, she appeared on the covers of Vogue, Charm, Harper’s Bazaar, and Mademoiselle.

In 1943, she married Lewis R. Teague, the son of a noted industrial designer, Walter Dorwin Teague. Lewis, who was also a painter, was in the Army Air Corps during the war and his wife followed him to his different posts around the United States until 1946, when they separated. She is said to have driven a 1934 Ford V8 Phaeton Deluxe touring car cross-country, even as people around her told her she couldn’t do it alone. Whenever the car stalled, she would pull over, park, and go snake hunting until the engine cooled and she could be on her way again.

In 1946, Ms. Abbott moved into a cold-water flat on 10th Street in Greenwich Village to pursue her art. She was soon introduced to the sculptor David Hare, who in turn introduced her to André Breton, Jackson Pollock, John Ashbery, and Frank O’Hara. In 1948 she met Mr. de Kooning, whose 4th Avenue studio was just around the corner from her apartment. That year, Mr. Hare took her to an unorthodox school he had begun along with Robert Motherwell, Mark Rothko, Barnett Newman, and William Baziotes, called Subjects of the Artist.

“Motherwell was in charge and he was okay, but always trying to educate you,” Ms. Abbott once said. “I preferred Barney Newman and Rothko. . . . they were the ones I learned the most from. They taught us to draw imagination.”

She and Mr. Hare frequented the Blue Note, a legendary New York City jazz club that is said to have influenced her work.

She was devoted to the primacy of color and the expressive potential of paint on canvas, and in her later years she often painted flowers, which she said constantly challenged her. “They change as you paint them,” she once said. “They are alive and they vibrate.”

In 1949, Ms. Abbott traveled to the Virgin Islands to obtain her divorce from Mr. Teague. There, by chance, she met Tom Clyde, an acquaintance from Southampton who was there for the same reason. The pair wed in 1950, and subsequently spent winters in the warmth of the Caribbean, in Haiti and St. Croix, and summers in Southampton, where they rented a large potato barn from the Jablonski family.

Ms. Abbott’s work began to flourish in the Caribbean, where she was thrilled by the mountain scenery and village markets, feeling herself at one with nature. “I had always been ‘with’ everything — animals, plants. I didn’t see the beauty, I was in it, I was part of it.”

When she was 9 years old and suffering from mastoid disease complicated by pneumonia, she recalled, she would look out of her bedroom window at two pine trees, one named for her and the other for her brother when they were born. In the Caribbean, she said, “I looked out at the trees and realized I wasn’t ‘with’ beauty and nature anymore, I was seeing it from the outside. So, for the rest of my life I’d paint to get ‘with’ it again.”

Ms. Abbott and Mr. Clyde divorced in 1966. In 1970, she began teaching art at the University of Minnesota in Minneapolis, and spent most of the decade there. After returning to New York, she bought a small house in Southampton and a loft on West Broadway, and painted in a studio in an abandoned Southampton icehouse. For the last 10 years, Ms. Abbott had lived quietly in Southampton, using her sunporch as a studio and enjoying a beautiful backyard garden.

She was represented by the McCormick Gallery of Chicago for about 20 years. “Mary had a lifelong love and affinity for animals, nature, and all living things,” wrote Thomas McCormick, its owner. “She literally saw beauty in everything, and her interests in nature and the power of artistic expression were at the core of her existence. She had an irrepressibly positive outlook on life that was infectious to all fortunate enough to know her.”

Ms. Abbott’s brother, William Henry Grafton Abbott, died before her. She leaves a half sister, Elizabeth (Bea) Abbott de Mowbray of London, and a half brother, Peter Munroe, whose whereabouts are unknown. She is also survived by Thomas (Toby) Clyde of Boston, her former stepson.

She will be buried in a family plot in Boston, with a memorial celebration to be held in Southampton in the autumn. A solo show of Ms. Abbott’s work is planned for 2020 at the Pollock-Krasner House and Studio in Springs.