If weather cooperates, project could be finished by next May, mayor says 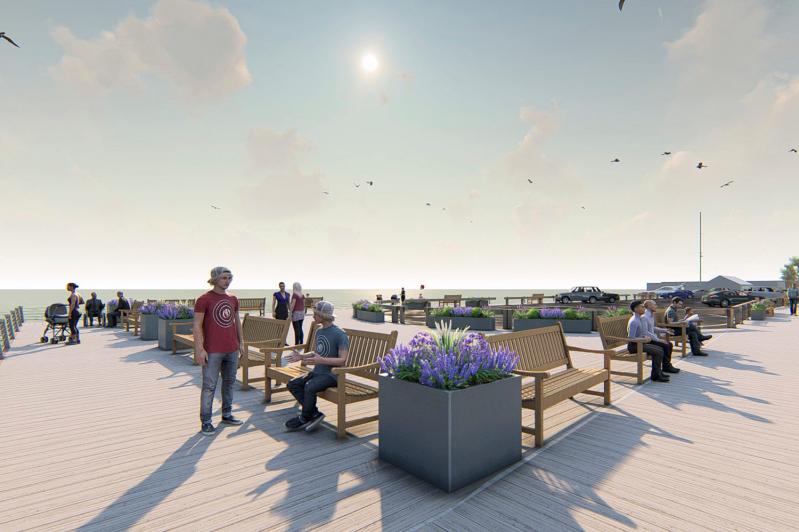 A rendering by Hollander Design shows what the viewing area at the northern end of Long Wharf in Sag Harbor will look like after the renovation.
By Jamie Bufalino

The $4.3 million renovation of Sag Harbor’s Long Wharf is scheduled to start in late September, and recognizing that many people may still have questions about that project, the development of the nearby John Steinbeck Waterfront Park, and other major things in the works around Sag Harbor, Mayor Kathleen Mulcahy and village board members will staff an Ask the Village booth at the annual Harborfest fair on Sept. 7 and 8.

“People can see the plans for Long Wharf, and the conceptual plans for Steinbeck Park, and tell us what they like, and what they don’t like,” Ms. Mulcahy said Monday. The booth will be open from 10 a.m. to 4 p.m. on both days. “I and the trustees will be there throughout the entire thing,” the mayor said.

The village intends to wait a year to see how the public uses Steinbeck Park before undertaking any major construction, but the Long Wharf project is imminent.

Hollander Design, a landscape architecture firm, did the plans for both projects.

Work at Long Wharf was originally scheduled to begin immediately after Harborfest, but was postponed by a few weeks to accommodate a wedding reception that will be held at Le Bilboquet restaurant on the wharf.

“I couldn’t imagine putting up a construction fence and having a five-foot-wide walkway to the restaurant,” she said. “I thought that would be a really mean thing to do to a bride.”

The village initially planned to install a construction fence along Bay Street, which would have prohibited vehicles from accessing Long Wharf and its 98 parking spaces, but that plan has been scrapped, the mayor said. The owners of businesses in the wharf’s shopping center as well as the Bay Street Theater told her they needed parking spaces, particularly for their disabled customers, as well as access for delivery trucks. “Bay Street can only get its sets in and out through the front door,” said Ms. Mulcahy.

The fence will now be installed halfway down the wharf, and parking at the southern end of the lot will remain available during much of the work, which is expected to take about eight months, depending on weather conditions. “If we don’t have a bad winter, we could be open by May 22,” she said.

The renovation of Long Wharf will include the construction of a new steel bulkhead 18 inches seaward of the existing one, creating a structure that is three feet wider than the existing one.

A 40-foot-wide viewing area, offering an unimpeded look onto Sag Harbor Bay, will be built at the northern end, and there will be an 8.5-foot-wide boardwalk around the perimeter. The reconfiguration of the site will result in the loss of four parking spaces.

A wood fence will separate the parking area from the boardwalk, and a fence with steel cables stretching between posts will be installed along the edge of the wharf. Lighting that is “dark sky” compliant will also be added to Long Wharf.

Drainage and filtration systems will be incorporated into the structure to prevent untreated stormwater from entering the harbor.

The first phase of the construction will consist of tearing up the existing asphalt. “It will be milled, so it won’t be beautiful blacktop, but people will be able to drive around, there will be some parking available at the southern side of the lot, and wheelchairs can access it,” said Ms. Mulcahy.

The construction of the new bulkhead will begin shortly thereafter, as soon as the steel for the project is delivered to Chesterfield Associates, the contractor.

“There’s no point in closing Long Wharf down until the steel is here,” said Ms. Mulcahy. “The second the steel gets here, we close it down, and they start putting it in as fast as humanly possible.”

Toward the end of construction, Long Wharf will be completely closed for a few days, she said, so crews can repave the parking area.

“Long Wharf is going to be gorgeous when it’s all said and done,” Ms. Mulcahy said.