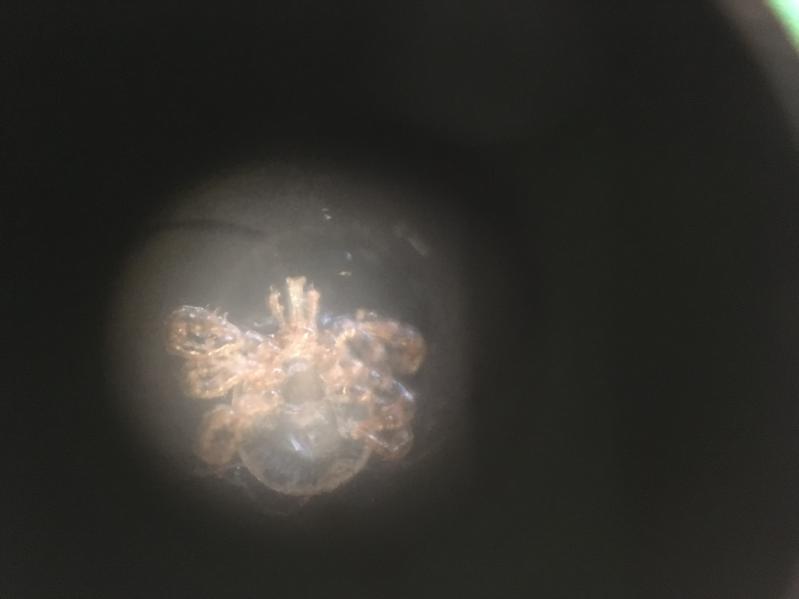 Shortly after hatching, larval lone star ticks wait for warm-blooded hosts from which they might draw their first meal.
David E. Rattray
By Jude Herwitz

As Labor Day approaches, so too does the height of tick season on the East End. An explosion of dozens of red bites up and down legs spells out quite an itch for victims, as well as perhaps some more dangerous side effects.

Larval lone star ticks are tiny, almost microscopic, and leave clusters of itchy bumps, often with black dots in the middle, on the skin of people whom they bite. Female adult lone stars can lay thousands of eggs, which means brushing against the wrong leaf could, without proper precautions, leave an irritating reminder.

The larvae can transmit the Alpha-gal meat allergy, but do not carry Lyme disease or any other syndrome, said Dr. Blake Kerr, a physician based in Wainscott. However, he said, the allergy is still not very common.

“The big thing is that it’s a damn nuisance,” he said of the larval ticks.

The number of lone star ticks has exploded in the past 20 years, said Dr. Scott Campbell, the director of Suffolk County Department of Health’s arthropod-borne disease program. While those ticks used to be concentrated almost entirely in Montauk, they have spread to all parts the East End. Dr. Campbell said that deer bear the responsibility for their proliferation, while Dr. Kerr posited that wild turkey were the culprits.

The most effective treatment for bites comes before they happen, Dr. Campbell said. He suggested both using insect repellent and tucking pants deeply into socks, to make sure the bugs have access to no part of the leg.

A local debate surrounding the ticks has been raging in the past years, with some saying that the biting arthropods are in fact chiggers, not tick larvae. But Dr. Campbell refutes that claim.

Where chiggers are active, he said, they bite people all summer, “but people here are only bitten by what they call chiggers in August, September, and October.” That coincides with the activity period of larval lone star ticks.

Dr. Kerr, in an interview, used “ticks” and “chiggers” interchangeably. He said that there is not yet a standard way of referring to the lone star tick larvae bites, but that chiggers is, in fact “a misnomer, really.”