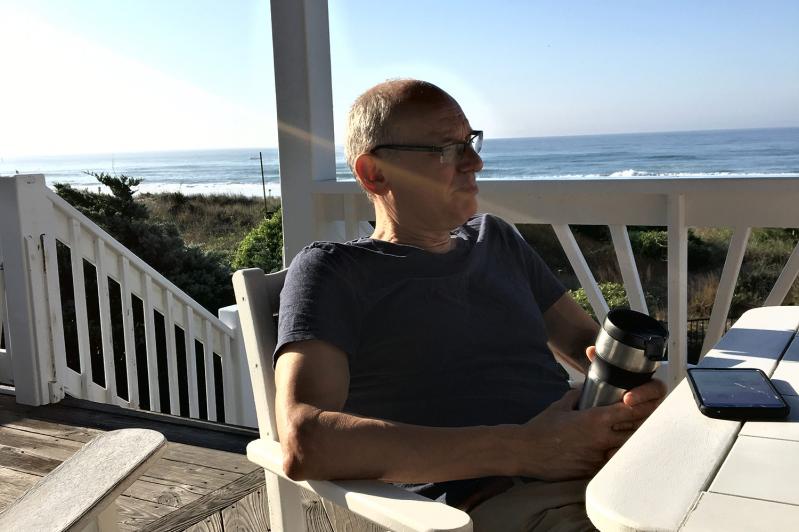 An award in memory of the late Dr. Charles van der Horst, above, was given out Saturday to the Swim for a Cure’s most enthusiastic and high-scoring participants — Tom Cohill and Laura Gunderson.
Laura Svetkey
By Jack Graves

Swimmers ages 7 through 79 churned the water in Bill and Dominique Kahn’s 25-yard pool on Georgica Close Road Saturday, raising money for pancreatic cancer research and evoking the spirit of the late Dr. Charles van der Horst, a retired University of North Carolina medical professor internationally known for his work with AIDS patients. The Amagansett summer resident had for years been an enthusiastic member of Tim Treadwell’s masters swim group at the Y.M.C.A. East Hampton RECenter.

Besides being a leader in AIDS research and treatment, both in this country and in sub-Saharan Africa, the Dutch-born Dr. van der Horst, 67, who captained Duke University’s men’s swimming and diving team in the 1973-74 season, was a marathon swimmer, a marathon runner, and a triathlete.

He died on June 14 of “a cardiac event” while swimming the 15.7-mile next-to-last leg of the arduous Eight Bridges marathon swims — 120 miles in all — down the Hudson River. Consequently, the event’s organizers canceled the last leg spanning the George Washington and Verrazano-Narrows Bridges.

Masters swimming here felt like a family because of the enthusiasm Dr. van der Horst generated, King said before Saturday’s races began. “He came out every August and made sure all of us were always together, either in the pool or in the open water, or at breakfasts. . . . Every year he had an end of the season dinner.”

“At his funeral he was described as ‘a convener of love,’ ” said Honerkamp.

In various obituaries, medical colleagues of Dr. van der Horst’s called him “a remarkable leader in research and treatment of people with H.I.V./AIDS in North Carolina and around the world . . . an incredible force for good, leading by example and inspiring many to action in the service of science and justice — no one reached out sooner, was more willing to listen, or to help when there was a need . . . a catalyst for change that has made the world a much better place. . . .”

“He was wonderful,” said Treadwell. “Not only was he a very good swimmer and friend, but he was a mentor, my idol. He always helped others become better. . . . For him it was all about participation.”

Consequently, a memorial award in Dr. van der Horst’s name was given out that day to the adult male and female swimmers — Tom Cohill, coach of the Y’s youth swim team, the Hurricanes, and Laura Gunderson, a new Ocean Rescue Squad member, in this case — who had participated in and had scored highest in the most events.

“He did every event,” said King, with a smile. “I offered to do the breaststroke for him last year — he said it was his most horrible stroke — but he pushed through. He always liked a challenge.”

This year’s competition was broadened to include many children, Hurricane swimmers who were brought to the fund-raiser by Angelika Cruz.

Leading age-group scorers included Daisy Pitches and Patrick O’Donnell in the 12-and-under division, Summer Jones and Curran O’Donnell in the 13-19s, Gunderson and Henri Morel in the 20-29s, Tracy Kwan and Jan Viviani in the 30-39s, Chantarelle Sung and Cohill in the 40-49s, Nicky Bindler and David Draper in the 50-59s, and Mike Bottini and Mike Wooton in the 60-69s.

The “Swim for the Cure,” she added, “began at the Kahns’ home three years ago to commemorate Tim Treadwell’s mother, Jean, who had died of pancreatic cancer. . . . As the swim has grown in size and excitement, everyone has come to understand that their participation, which is bringing awareness to the fight against this terrible disease, is really making a difference.”

The event, at which Marcia Lustgarten, the Lustgarten Foundation’s founder, was a spectator, raised $7,240, said its publicist, Joe Viviani.