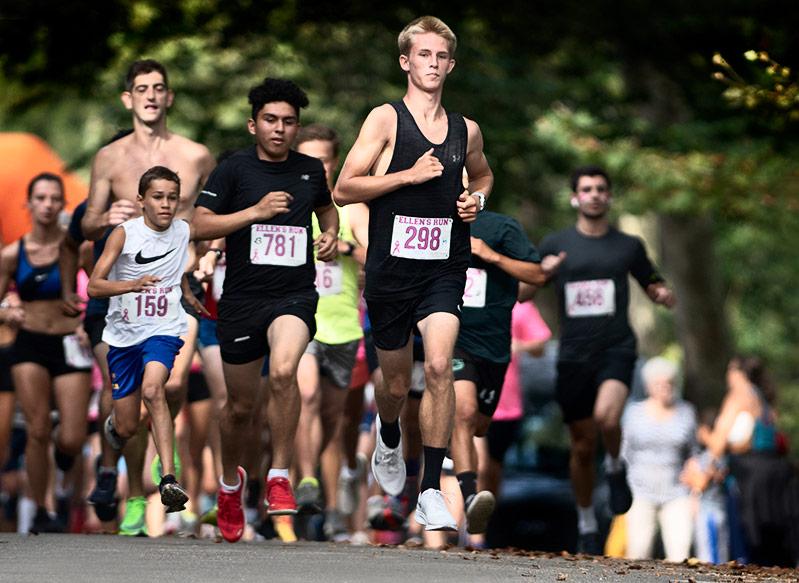 Kal Lewis, a promising Shelter Island High School miler and cross-country runner who’s about to enter his senior year, led a field of almost 800 over the Ellen’s Run 5K course in Southampton Sunday, breaking the tape in front of Stony Brook Southampton Hospital’s Parrish Hall in 16 minutes and 15.90 seconds.

Lewis, whose parents and coach cheered him on as he set out onto the course, was slowed by respiratory problems at the end of the spring’s track season, but looked no worse for the wear after Ellen’s Run. It was his first race of the summer, and the blond 6-foot-2-inch long-distance runner said he felt fine, adding, in reply to a question, that he had been checked out earlier this summer by Dr. Erin McGintee, a Southampton-based allergist-immunologist.

Erik Engstrom, a county cross-country champion when he was at East Hampton High who is entering his senior year at the University of Massachusetts, set a course record at Ellen’s last year with a 15:39.97 — a record that still stands, though Lewis, who is to visit the University of Iowa soon, said the lead vehicle took a wrong turn at the start of the race, which cost him, he thought, about 25 seconds.

The race, which benefits the hospital’s Ellen Hermanson Breast Center and Ellen’s Well’s work with patients and their families, drew participants (runners and walkers) ranging in age from 6 to 82. And about 60 of those in the field, like Debbie Donohue of East Hampton, who has made it to all but a few of the 24 Ellen’s Runs to date, were survivors of the disease.

Dr. Julie Ratner, Ellen Hermanson’s sister and the event’s founder, has said she thinks of the survivors as “sheroes. . . . To me, the race is not about who wins, but about these women. They’re brave and bold and they should be celebrated.”