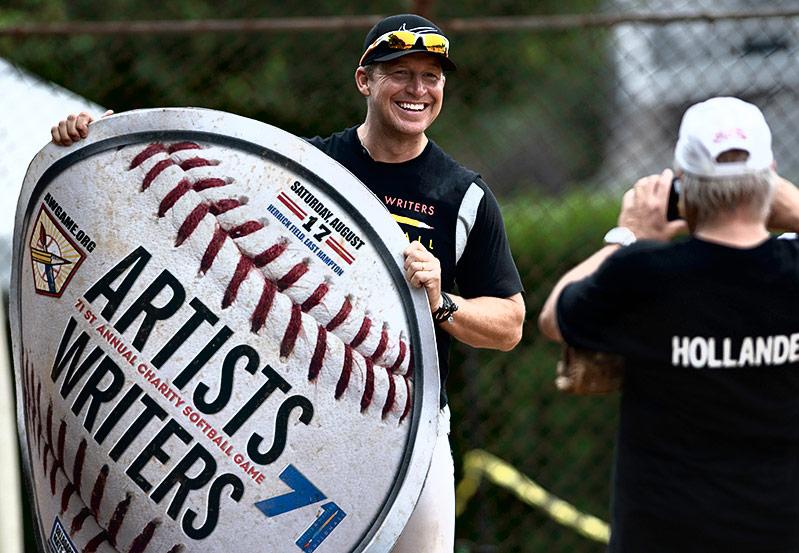 Chris Wragge, the CBS 2 anchor, was the Game's M.V.P., hitting a home run leading off the top of the seventh inning.
Doug Kuntz and Craig Macnaughton Photos
By Jack Graves

When the dust had cleared on the Artists’ 10-8 win in the Artists and Writers Softball Game Saturday, Ed Hollander, basking in the glow of victory, said that, surprisingly, the Game had “smacked of competence,” high praise indeed for a contest in which humanity’s proclivity to err, so evident elsewhere in the world, is being borne ceaselessly into the past at Herrick Park.

Yet, remarkably, as embarrassingly well played as this 71st meeting between the ancient antagonists was, the joy — in large part owing to the good offices of Benito Vila — not only remained, but was even amped up. Bill Clinton came, kids, about 30 of them, ran around the bases, Caroline Doctorow sang “This Land Is Your Land,” and the coconut water flowed as the Scribes and the Paletteers went at it in the annual agon.

With the former president, who had been enveloped within an adoring circle of iPhone-clicking well-wishers upon his arrival, calling the balls and strikes, the Artists, who were first up, played as if they weren’t thinking about tomorrow: Following a popout, Peter Cestaro was walked, Robert Tuchman singled, and Zak Meers went deep, a blow that chased home two runs before Meers himself was tagged out by Walter Isaacson just before crossing the plate.

Isaacson, buoyed as he ought to have been by the play, one of the day’s, perhaps even history’s, best, said Clinton had at first ruled Meers safe, but then had reversed himself, having triangulated the facts in arriving at the truth.

Richard Wiese’s two-out, bases-loaded single in the bottom half of the first wrested the lead back, at 3-2, for the Writers, who were to load the bases again that inning before Isaacson faced the incontrovertible truth that he had grounded out to third.

A one-out double by Brian Pfund, a Montauker batting 12th in the lineup who plays Double-A baseball for Los Petateros de Sabana Grande in Puerto Rico, went for naught in the Artists’ third as David Baer, the Writers’ shortstop, following a popout, made a beautiful play (one of at least a half-dozen he was to make) on Cestaro’s shot for the hole.

Joe Sopiak, who had come on in relief of Walter Bernard for the Artists, induced Baer, Andy Friedman (last year’s M.V.P.), and Daniel Pulick to sky out successively in the bottom of the third, and in the top of the fourth, with Claude Beudert umpiring, Brett Shevack, the Writers’ 69-year-old third baseman (and three-time M.V.P.), speared Meers’s leadoff line drive, Baer made a nifty over-the-shoulder catch of Eddie McCarthy’s pop into shallow left-center, and Friedman (an essayist, musician, and illustrator) made a circus catch at the center-field fence of Chris Wragge’s bid for a two-run home run that would have tied the score at 4-4.

The Artists did tie it up in the fifth on a two-out, two-on smash by Peter Borish, who was tagged out by Baer as he slid into second.

Testimony to the essential lightheartedness with which the teams played, Diane McInerney of the Writers was allotted four swings-and-misses as a pinch-hitter in the bottom of the fifth.

Thirty or so kids, with Vila starting them off, raced around the bases before the sixth inning began, after which Pfund, on the first offering from Vila, lined a home run over the fence in deep center field, the ball landing kerplunk atop a table umbrella. That clout put the Artists up 5-4, and soon after it was 6-4 as the result of an r.b.i. double by Tuchman.

A fading two-out triple to right field by Baer kept the Writers alive in their half. A single by Friedman drove Baer home, and, soon after, Friedman slid home safely, tying the count again, at 6-6.

The good news for the Artists in their seventh was that Wragge, CBS 2’s anchor — a former University of New Hampshire quarterback and the game’s M.V.P.-to-be — led off with a home run that landed at the base of the tennis courts’ fence in left field.

And the Paletteers were to lose all sense of perspective in the eighth, sending eight to the plate on their way to four more runs and a 10-6 lead that effectively deleted the Writers’ dreams.

Friedman came to bat with runners at first and second and two out in the bottom of the eighth, but, as was the case with many of the Scribes’ heavy hitters that day, he flied out in swinging for the fences.

Leif Hope, the Grand Old Man of this rivalry, which has been played as a benefit for local charities at Herrick Park since 1968 — this year’s beneficiaries being the Eleanor Whitmore Early Childhood Center, Phoenix House Academy, the Retreat, and East End Hospice — was not about to write the Writers off as the bottom of ninth inning loomed. “Not yet!” he counseled an interlocutor. “Not yet.”

And to make sure, before it began, that the Writers wouldn’t get creative, Ronnette Riley, the Artists’ manager (and unsurpassed scorekeeper), made sure that she and Ken Auletta, the Writers’ co-manager, were on the same page when it came to the Penmen’s last at-bat lineup.

They were: The fifth, sixth, and seventh hitters were due up. The fifth, Pulick, led off by flying out to John Longmire in center, after which Wiese hit a high hopper toward first base that Stu Sleppin gathered in but could not (presumably because of creaky knees) translate into an out.

A popout by Shevack to Michael Dougherty at second brought up Alec Sokolow of “Toy Story” fame, and he came through big time in crunch time, jacking a two-out, two-run homer over the left-field fence that brought the Scriveners, who clearly were not going gently, to 10-8.

A subsequent full-count line drive up the middle by Rick Leventhal that seemingly passed through Sopiak’s midsection further thickened the plot, but a long, long fly to Longmire by Jonathan Schenk, who had come in to bat for Keith Kelly, wrote finis.