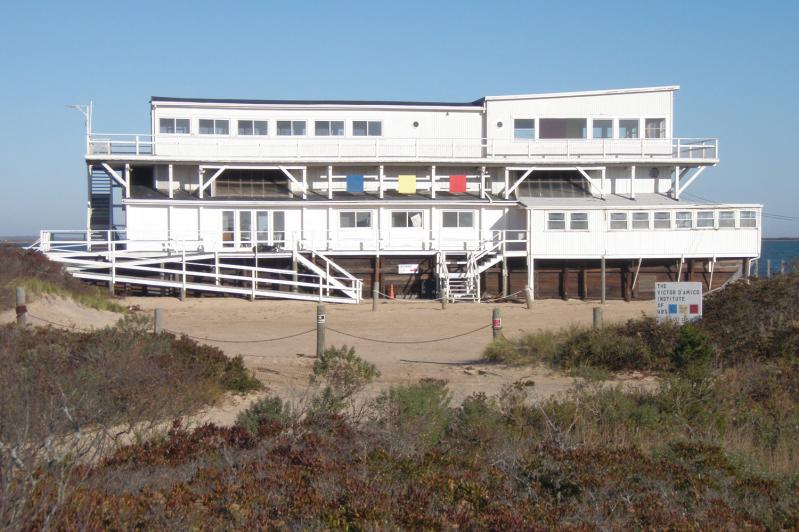 The East Hampton Town Board voted unanimously last Thursday to designate the Art Barge and the D’Amico Studio and Archive in Amagansett as local historical landmarks.

The Art Barge, formally known as the Victor D’Amico Institute of Art, was established in 1960 by the founding director of education at the Museum of Modern Art in Manhattan, who served in that role from 1937 to 1969. He and his wife, Mabel D’Amico, built a house at Lazy Point, Amagansett, in the 1940s, and he initiated MoMA-sponsored art classes in the mid-1950s at Ashawagh Hall in Springs, according to the institute’s website.

With help from fishermen, he brought a retired Navy barge from New Jersey and beached it on the Napeague Harbor shore. The D’Amico Studio and Archive, a separate building, at 136 Shore Road, houses permanent and rotating exhibitions of visual art as well as early modernist furnishings, found objects, jewelry, and clothing by Mabel D’Amico, and also photographs, documents, books, and ephemera pertaining to D’Amico’s work in arts education, it says on the institute’s website.

The Art Barge hosts classes in numerous visual art disciplines during the summer, along with exhibitions and events. According to the town board’s resolution, which was sponsored by Councilwoman Sylvia Overby, the structures “have special character, historic, and aesthetic interest and value as part of the cultural, economic, and social history of East Hampton; embody the distinguishing characteristics of an architectural style, building type, period, and method of construction, and because of their unique location represent an established and familiar visual feature of East Hampton.”

Before the vote, several residents, including Christopher Kohan, the institute’s president, who met Victor D’Amico in 1975, told the board of the resolution’s importance. The D’Amicos first visited Amagansett together in the 1930s, though Mabel had visited the town as early as 1915, said Mr. Kohan, who had suggested the historical designations to the East Hampton Arts Council.

“They ended up renting a cottage in the Smith Meal fish processing plant, did paintings and artwork, and fell in love with the area,” he told the board.

“It’s very important that history can really share, not only the past, but it also gives something for the future,” Mr. Kohan said. “I think Victor would be very honored and proud. . . . I look forward to a favorable decision.”

Victor D’Amico “believed everyone . . . regardless of their education status, financial status, even your ability to create art, had a right to be expressive and creative,” said Joyce Raimondo, a former education coordinator at the Museum of Modern Art who came to the Art Barge in the 1990s. “To me, this is not just about art. It’s about core principles, and the value of being American. Everybody is equal and we all deserve a chance.”

Orly Friedman, who serves on the institute’s board of directors, picked up on that theme, telling the board that Victor D’Amico set up art around tenement buildings on Manhattan’s Lower East Side in the 1930s so ordinary people could be exposed to it. “That’s why I’ve never left,” said Ms. Friedman, who was hired one month after the artist and educator’s death, in 1987.

“Victor’s legacy has impacted so much of society, and we don’t credit him for it,” she said. He was responsible for bringing art education to public schools, she added. “There is so much we need to document about Victor’s life. Giving the barge and house historic status will give us the impetus to start documenting.”

Supervisor Peter Van Scoyoc thanked the speakers for voicing support for “a remarkable place, a remarkable story, and a remarkable person that we’re dedicating this to.”

An email from the institute on Sunday said the “legislation brings renewed vision, optimism, and vigor to our organization. We are entering an exciting new chapter of vitality and growth based always on the ever-relevant principles of our founders, Mabel and Victor D’Amico.”