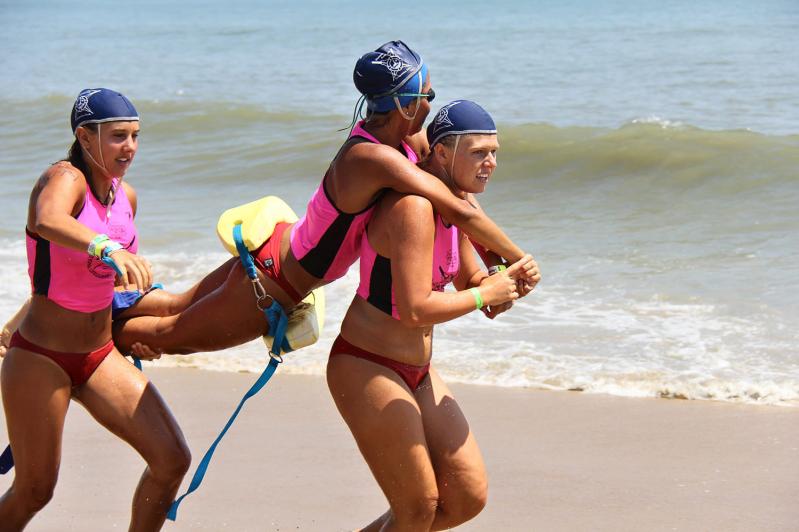 Lexy Parsons, Darcy McFarland, and Olivia Brabant were East Hampton’s entrants in the U-19 rescue race at the national tournament in Virginia Beach last weekend. It was learned Tuesday that Sophia Swanson and Bella Tarbet have been named to the U.S. U-19 team that is to compete in a worldwide competition in South Africa next month.
Nicole Castillo
By Jack Graves

The Hampton Lifeguard Association, as it did last year, placed sixth in the United States Lifesaving Association’s national tournament in Virginia Beach this past weekend.

East Hampton finished third in 2016 and fifth in 2017, but John Ryan Jr., who heads East Hampton Town’s guards, has said that “the point is not winning — we engage in these competitions so that we can become better lifeguards.”

In the open division, Amanda Calabrese led the way, placing second in beach flags, winning, with Molly Mamay, the 4-by-100 relay, and placing second, with Sophia Swanson, in the board rescue race. Also in that division, Ryan Paroz won the surf ski race.

Bella Tarbet was the runner-up in U-19 beach flags, and Swanson, also in that division, placed third in the distance swim, third in the run-swim-run, and third in the Ironguard competition.

In the 14-15 division, Emma Hren won the distance run; Nicky Badilla and Tenzin Tamang won the rescue race; Julia Erikson and Colin Schaefer were runners-up in beach flags, and Schaefer and Corrina Castillo were third-place finishers in distance runs.

In the 12-13 division, Luke Castillo was second in the board race and third in beach flags, and Brodie Schneider was third in the distance run.

Daisy Pitches (with Lyla Metz the runner-up) and Liam Knight were winners in the 9-11 division’s Ironguard competitions; Schaefer and Luke Rossano placed one-two in beach flags; Myla Schneider was second in beach flags, and Pitches placed second in that division’s board race and was a member, along with Knight, Metz, Ginger Griffin, and Elizabeth Daniels, of the third-place swim relay team.