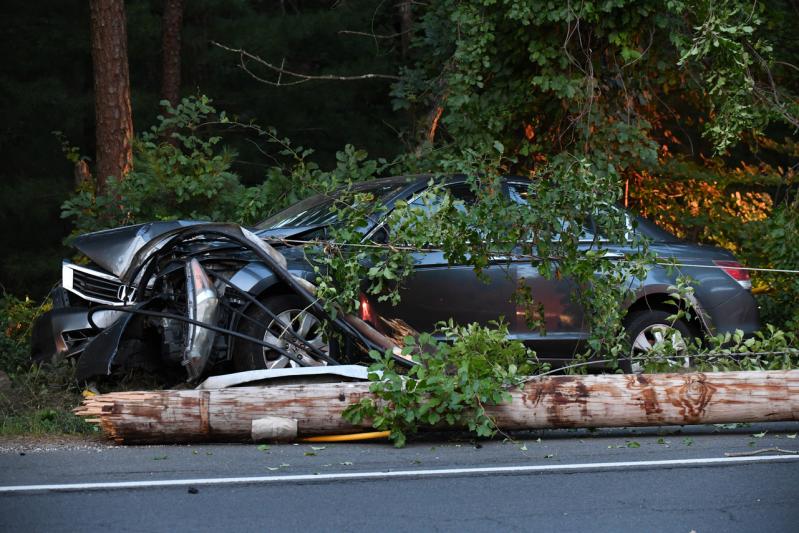 A Honda took down a pole and wires on Route 114 in East Hampton Saturday morning. The driver was charged with a drunken-driving offense, police said.
Doug Kuntz
By Taylor K. Vecsey

An alleged drunken driver hit an electric utility pole on Route 114 in East Hampton Saturday morning, closing a portion of the main thoroughfare between Sag Harbor Village and East Hampton for several hours.

East Hampton Town Police Sgt. Gregory Martin said only one vehicle, a Honda sedan, was involved in the accident at the Route 114, Merchants Path, and Swamp Road intersection at about 5:15 a.m. A driver, who was later charged with driving while intoxicated, severely damaged a utility pole, he said. Wires were in the roadway, as well, making it impassable to traffic. Sergeant Martin declined to release the driver's name, as charges were still being filed.

One passenger with an injury was transported to Stony Brook Southampton Hospital, the sergeant said.

A PSEG Long Island crew is working "as quickly as possible" to make the repairs, Sergeant Martin said, though they were not able to provide an estimated time the repairs would be made.

Also, Accabonac Road in East Hampton is closed near Queens Lane. East Hampton Town police said in a Facebook post that drivers should use Floyd Street or Town Lane to avoid that intersection. A sport utility vehicle hit a pole in that accident, as well. The driver was transported with minor injuries.

This article will be updated when more information is available.