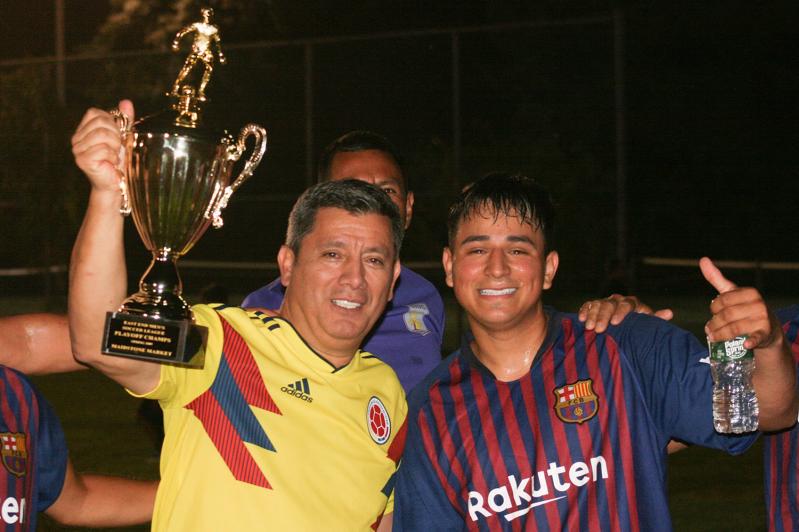 East Hampton Soccer Fever, which hopes to field a 23-and-under entry in the Long Island Junior Soccer League, and Maidstone Market, a perennial power managed by John Romero Sr., had played to 1-1 ties in the two games they’d contested in the 7-on-7 league’s regular season, but in the playoff final at East Hampton’s Herrick Park on July 24, it was all Maidstone as its more experienced players dominated the younger ones from the get-go on the way to a 10-2 shellacking.

The margin of victory was the largest in memory in a 7-on-7 championship game.

Granted, Soccer Fever was missing one of its better forwards, Donte Donegal, and had in Michael Tamay only one potential sub vis-a-vis Maidstone’s four, but, all things being equal, it was hard to imagine the younger team playing on an even footing that night.

Leslie Czeladko, the league’s spok­esman and web meister, ordained that there be two 35-minute halves with a penalty kick shootout to follow if the game ended tied. Not to worry: Maidstone got on the scoreboard with barely five minutes gone when, following a free kick and a scramble in the goal mouth, Xavi Piedramartel booted in a left-to-right shot that a defender desperately tried to save but could not.

Meanwhile, at the other end, Maidstone’s defenders, Julian Barahona chiefly, were checking Soccer Fever’s scoring threats, Sebastian Fuquen and Justin Carpio, as they tried to break away.

In the 20th minute, Eddy Juarez, who was camped out at the right of Soccer Fever’s goal, finished off the rebound of a shot taken by his fellow forward, Gehider Garcia, for a 2-0 lead.

Three minutes later, Garcia, having gathered in a long pass from Maidstone’s goalie, Alex Mesa, spun around an onrushing Fuquen and blasted a shot by the keeper, Esteban Aguilar, into the right corner of the cage.

Down 3-0 with 10 minutes yet to play in the first half, it looked pretty grim for Soccer Fever, whose defenders dashed back and forth in vain attempts to interrupt Maidstone’s deft and relentless short-passing game, which often involved three or four players.

Romero began subbing near the end of the first period, which ended with Maidstone up 3-0.

In the second half the lid was to come off, though Soccer Fever showed some life in its opening minutes.

George Naula, one of those who’d been on the sidelines as the game began, made his presence known in the 39th minute when, following a steal by a fellow sub, Maicol Parra, he went one-on-one with Aguilar from about 12 yards out, beating Soccer Fever’s keeper to the far post.

It was to be the first of four goals that night for Naula. Just one minute later, after a Soccer Fever coach was heard asking of Antonio Padilla, “Why is this guy open?” Naula beat Aguilar again, for 5-0, having received a long over-the-top pass from Padilla, who, indeed, had been unmarked near the midfield line.

It was about this time that a spectator asked if there were a “mercy rule” in soccer. No, said Czeladko, there wasn’t.

Aguilar made two successive saves on shots by Naula in the 44th minute, and soon after, Soccer Fever finally got on the board as the result of a penalty kick taken by Fuquen, who had been taken down in the goalie box, a skirmish that resulted in Mesa being yellow-carded and replaced in the goal by Parra.

Romero was also yellow-carded by the referee, Minor Huertas, as he argued in Mesa’s behalf. A yellow-carding of a frustrated Carpio followed soon after, just before Mesa re-entered the game, in time to take the ball up the field and pass off to Naula, who notched his third goal of the night.

A hands call on Barahona in the box in the 53rd minute led to another netted penalty kick by Fuquen for 6-2, but less than a minute later Naula, the recipient of another over-the-top pass, this time from Piedramartel, made it 7-2.

“At this point it was all over,” Czeladko said in his eastendsoccer.org account. “The only question was how many more goals could Maidstone score.”

The answer was to be three more — by Mesa, on a penalty kick, and Garcia twice, with assists from Juarez and Piedramartel, completing a hat trick.

“Still,” said Czeladko, “it should be noted that Aguilar played well that night, preventing Maidstone from scoring even more often.”