A foul wind at Ditch Plain 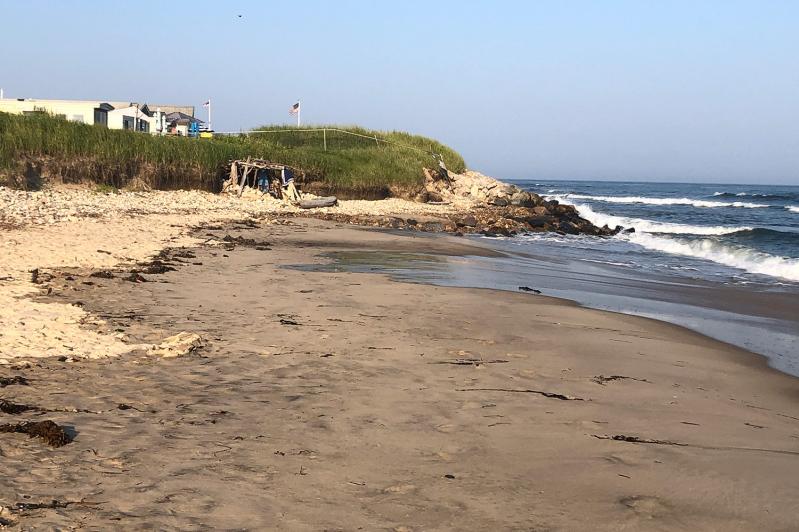 A few of the Montauk Shores condominiums can be seen over the dune east of the jetty at Ditch Plain as high tide rolled in late Tuesday afternoon.
Christine Sampson
By Christine Sampson

As complaints about water quality at Ditch Plain persist, with surfers falling ill and beachgoers reporting foul odors at low tide, routine testing performed there this week by Concerned Citizens of Montauk turned up nothing amiss.

A week ago, though, C.C.O.M.’s environmental advocate, Kate Rossi-Snook, found enterococcus — a bacterium found in human fecal matter — at the highest level she had ever seen at Ditch Plain. It registered at 588 parts per billion, but at zero again this week.

Last week’s water samples, collected on July 24, followed heavy rains, which can often influence test results. Runoff from water on land carries with it fertilizers, pollutants, and debris when it flows into larger bodies of water, Ms. Rossi-Snook has said.

She tests Ditch Plain east of the jetty, as well as many other sites in East Hampton Town, generally each Monday around the same time.

“I just go in to the top of my boots,” Ms. Rossi-Snook said this week. “You never really know” where the bacteria are coming from, she said, “unless you do a formal source tracking study, and unfortunately, we don’t have the technology.”

By Monday of this week, she said, “it seems things have gotten flushed out enough without rain over the weekend.”

Members of the Montauk surfing community and the Ditch Plains Association pointed fingers this week at what they hypothesized is a failing septic system at the nearby Montauk Shores mobile home park, which is in the process of upgrading its wastewater treatment system.

“The smell is horrendous, and it’s not a seaweed smell,” said Connie Cortese, a member of the Ditch Plains Association. “The other day it was so strong I wouldn’t go in the water. . . . I’ve been here all my life. There’s a big difference between low tide, which I know, and this.”

She has not gotten sick, but one of her friends, Bob Schiff, a Springs resident who surfs nearly every day at Ditch Plain, spent his wedding anniversary in early July in bed with infections of the ears, sinuses, and chest.

“There weren’t a lot of people there. It was quiet, actually,” Mr. Schiff said, recalling Ditch Plain the day he believes he got sick. “A few days later, I had to go to the Bridgehampton walk-in.”

He blamed not only the Montauk Shores septic system, which East Hampton Town officials have said is under-sized for the amount of waste that flows through it, but also the Suffolk County Department of Health Services, which has been processing an application for upgrades at Montauk Shores for several months.

The Department of Health Services did not respond to a request for comment by press time this week.

Philip Andriola, vice president of the board of managers for the Montauk Shores Condominium Association, has asserted the septic system there is functioning normally and is not undersize. The board receives daily reports from its paid, on-site facilities manager, he said, and there have been no incidents related to its septic system.

“The application [with Suffolk County] is ongoing. Comments are being exchanged between our engineers and the Department of Health,” Mr. Andriola said. “All is progressing. We are — fingers crossed — to break ground as soon as possible.”

He also said July occupancy was “underpopulated relative to usual summers” at Montauk Shores. He pointed to recent heavy rains as the likely cause of the high bacteria count at Ditch Plain, not the trailer park’s septic system.

“Whatever happened immediately before is going to be relevant,” he said. “Hard rain in a ditch with runoff just seems logical.”

Mr. Andriola also continued to suggest the public bathrooms at Ditch Plain were to blame.

“Until something different happens with our system that’s working, which, again, is being improved, there’s nothing to report or reason to change position,” he said. “There’s more people using the beach each day, especially each weekend, than bathrooms [handle], not counting what other people might do.”

Ms. Rossi-Snook also had another theory. A dead whale was recently found decomposing off the shore of Montauk, though farther east and much farther seaward of where she tests for water quality at Ditch Plain.

“There’s no way to really substantiate this, but it got me thinking that was what was making people sick,” she said. “It had been so decomposed and predated by scavengers.” Maybe the cause of people’s initial illnesses could have been that, and “not a land source.”

Also, Ms. Rossi-Snook said, C.C.O.M. only tests for the presence of enterococcus. “A different type of bacteria or pathogen could be making people sick,” she said. “There are a few different types of fecal bacteria.”

People have stopped by the C.C.O.M. office to inquire whether the water is safe for swimming or shellfishing.

“A handful of people each year do report getting sick especially in the surfing community, but it seems like it’s been more frequent this year and for a longer period of time,” Ms. Rossi-Snook said.

The sewage smell, people said, is strongest on weekend mornings.

“I smell it when the tide is low and the wind is coming from the east,” said Dave Schleifer, a Montauk resident. “It smells like cesspool runoff. It’s not bunker getting chewed on.”

Roger Feit, an avid surfer who recently upgraded the septic system at his own house, agreed. “Yeah, it stinks. It was undeniably sewage,” he said. “It was pretty intense.”