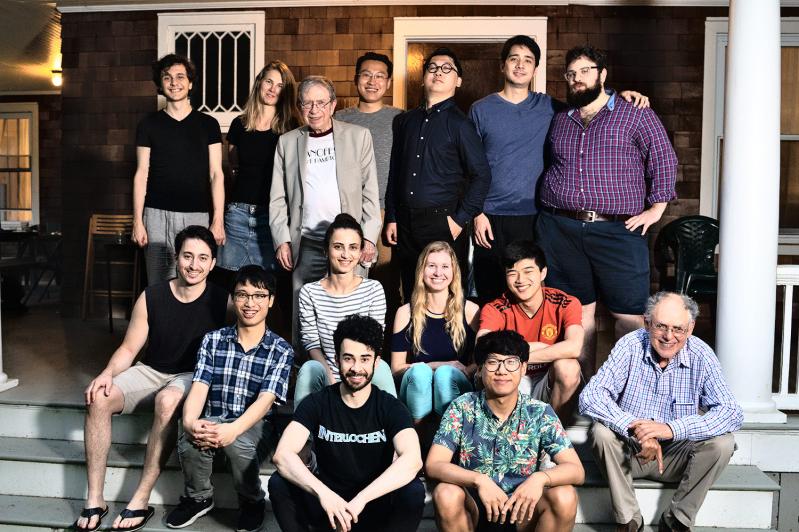 In a large house in East Hampton boasting 11 grand pianos, there could be signs that warn, “Don’t Put Anything on Top of Piano.” Not so with the grand piano that is in the kitchen of the Pianofest house. In fact, its use as a chopping block and counter space for food preparation is necessary, since there isn’t much other space for those tasks.

Michael Lenahan, a Pianofest participant, doubles as the house manager. Among other things, he gets the groceries and makes dinner most evenings, using a large outdoor grill. Everyone usually eats together at a long table on the porch, and  Paul Schenly, the director, eats with them. Space to eat inside is limited, as there is a billiard table in what might otherwise be the dining room. “It’s all a little bohemian,” said Mr. Lenahan, smiling.

Six pianists gathered last week to talk about their experiences participating in Pianofest, a summer festival that offers concentrated study to a small group of auditioned and very talented young artists, who live for four weeks in a large house in East Hampton and present concerts to the public in venues in Southampton, East Hampton, and Westhampton Beach.

Mr. Lenahan, who hails from Houston and is a Juilliard graduate, said that “there are a lot of festivals, but one of the unusual things about Pianofest is how small it is and how intimate it is. Most festivals are much larger, and the sense of family that you get from Pianofest is unique. We all hear each other practicing, we all know exactly what pieces each other is working on. We get to know each other really well.”

Now in its 31st season, Pianofest was founded by Mr. Schenly, a renowned concert pianist and head of the piano department at the Cleveland Institute of Music. It emphasizes an ethic of support rather than competition. The participants range in age from 20 to 32, and are all enrolled in a university. Although they are students in a sense, they all have outstanding accomplishments — performing internationally, winning prestigious competitions, being appointed to faculty positions.

“I’m really enjoying being here,” said Alexey Pudinov, who is from Germany and won the Gershwin Best Performance Prize in 2015. “It’s just fantastic to have time to practice so much. You have to concentrate all the time when you practice, because everyone is listening to you, and giving some suggestions. We have a fantastic atmosphere here; we are all like one big family.”

They can’t help but hear each other practicing. There are almost enough pianos for every room, including bedrooms and two “nap rooms.” (One room has a piano and an ironing board.) There is continuous music coming from several pianos as students practice with seemingly unbroken concentration, regardless of who walks by or what else is going on around them, whether chatter, laughter, or chores. We were seated on the porch for our conversation,  where the strains of piano music were relatively faint.

Maddalena Giacopuzzi, who is here this month from her native Italy and has performed with the Orquestra Sinfonica del Estado de Mexico, said that Pianofest was “like a really full immersion. We are together 24/7, so there’s no escape. But that’s also why we get to know each other so well. Also, it’s so inspiring, because you’re always surrounded by music, whatever you are doing, so you can get inspiration for anything.”

Tian Tang, born in China, who studied for nine years at Shanghai University and is now attending Northwestern University, agreed. “There’s no competition in this festival, unlike many other festivals,” she said. “We live in the house all together — we make lunch together, we make dinner together, we do our chores together — and it’s a really fun experience to get to know each other not only as a musician, but also as a person.”

“At a lot of academies or summer festivals you get a schedule that you follow, and it’s run by an organization,” Ms. Tang said. “Here, we can sign up for lessons whenever we want to have one. This week there is a guest artist, so we can have lessons with him, too. We also usually have lessons with Mr. Schenly.”

“It reminds me of 100 years ago, 200 years ago,” said Mr. Lenahan. “Oftentimes if you were a piano student you would move in with your piano teacher, so you’d have a constant osmosis of ideas, but if you go to a conservatory or college and study music, you’ll have a lesson once a week. So the level of attention that you get here is really fantastic and helpful to grow as an artist.”

“It’s like an extended summer gathering,” said Ms. Wang, “where it’s an intensive place to make music but also full of this positive energy. It’s such a great balance of challenging and motivating and having fun. It’s small enough that you know everyone, and there are none of the usual school things, like ‘Do I fit in here?’ or ‘Should I talk to that person?’ There really is no other summer program that has this kind of format.”

Speaking of nonmusical activities, Mr. Lenahan said, “I think when there’s so much piano 24/7, it’s important to also have a way to escape it — whether it’s the beaches or other attractions nearby, game night, or playing Ping-Pong on the lawn. After hearing classical music all day long from every angle, and then lying on the beach with just the sound of the waves, it’s the perfect combination.”

In addition to their musical accomplishments, the students have other interests and abilities. Ms. Giacopuzzi makes her own concert gowns; Ms. Tang is a freelance movie critic. Kevin Sun, a Californian, is pursuing career paths in both music and medicine, having performed in Austria and Canada and published papers on child psychology and Plato’s philosophy. “I live a balanced life,” he said. “I don’t believe a physician is just a diagnostician. A physician needs to be a humanist as well, and this is my own way of delving into how to better care for my patients with translatable skills through music.”

Pianofest continues through Aug. 12 with concerts in East Hampton, Southampton, and Westhampton Beach. For the final concert, Mr. Pudinov said, “We are preparing some special things, like piano four-hands, and eight hands on two pianos.” More information can be found at pianofest.com.