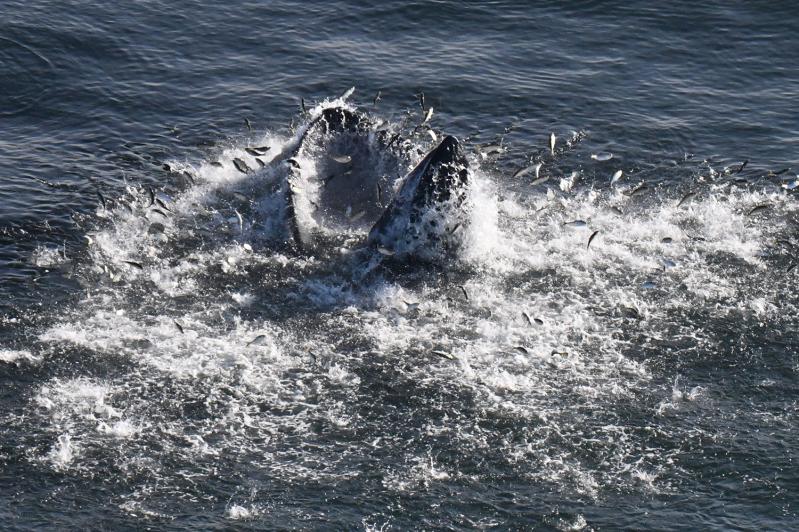 Baleen whales like the humpback have no teeth, but rather sieve krill, small fish, and other marine organisms from the ocean water.
Doug Kuntz
By Larry Penny

The dead adult humpback whale towed to the Montauk ocean beach last week is just one of several humpbacks that we have been reading about this year in the local newspapers. There have been many sightings offshore and even in Great South Bay and other estuarine water bodies. This species belongs to the baleen whale group, which includes the 100-foot blue whale and at least 12 other species, one of which is the endangered right whale.

In the whaling heyday of the 1800s, Long Island and Nantucket were the Atlantic Coast whaling capitals. Local families including Squireses, Edwardses, Whites, Talmages, Millers, Lesters, Havenses, Fosters, Fields, Kings, Bennetts, a few Pennys, as well as Montauketts and Shinnecocks, were part of whaling ship crews that worked the North Atlantic, the South Atlantic, and then the Pacific Ocean all the way to Japan and the rest of eastern Asia’s coast. Sag Harbor was a local hot spot for whaling; the area now filled with   shiny yachts and cabin cruisers used to be filled with whaling boats driven by sails and wind power.

When whaling in the Atlantic dried up, the boats had to sail around Cape Horn to get to the Pacific, as the Panama Canal wasn’t completely dug and fitted until 1918. By then, whaling had pretty much reduced whale populations to such meager numbers that it didn’t pay for local whalers to pursue them.

The right whale, Eubalena glacialis, was one of the last species to be harvested from shore and the Edwardses were among those who took the last one in the early 1900s. The Atlantic right whale, which had been the “right” whale to harvest, soon became the wrong one to harvest and right whale harvesting was banned in 1936. This species was one of the first to wear the seal of “endangered species” when in 1973 President Nixon and Congress created the Endangered and Threatened Species Law which is still in effect 46 years later.

Nevertheless, by last count there were only about 400 right whales, and, according to Whale and Dolphin Conservation USA, since April of 2017, 26 of them have died. These whales, one of which was 57 feet long when taken, are affected by many oceanic disturbances — vehicle collisions, naval wars, very large fishing nets, as well as exploratory explosions, offshore drilling, and the installation of wind turbines for generating electricity such as in the English Channel, as detailed in a recent scientific paper authored by Dr. Peter G.H. Evans of the Sea Watch Foundation, titled “Marine Mammals in the English Channel in Relation to Proposed Dredging Scheme.” Except  for bottlenose dolphins and harbor porpoises, the English Channel is a whale and dolphin desert. No wonder. First, the two world wars, then second, an increase in shipping and pleasure boating, and finally the installation of hundreds of wind turbines in the late 1900s and continuing until this day.

Many whales and dolphins in the world’s oceans have still not recovered. The oceans have become a jungle of shipping, oil exploration, and production, wind generation, fishing with very large nets, pleasure cruises, as well as plastic dumping, oil leaking, and a thousand other disturbances that relate to the 20th and 21st centuries. Today’s seven-plus billion humans need a lot more in terms of resources and activity than the several millions around in the 11th century, when right-whale whaling got underway.

According to the National Audubon Society’s 2003 “Guide to Marine Mammals of the World” by Randall Reeves et al., the majestic blue whale reaches lengths of 100 feet and weights of 200 tons, has fewer than 1,000 individuals worldwide, was almost hunted to extinction by whaling in the early part of the 20th century, and despite increasing protection since then is recovering very slowly indeed.

The sperm whale fabulized in Herman Melville’s novel of 1853, “Moby-Dick,” was still being taken in Pacific Ocean waters as late as the mid-1960s, but is no longer harvested. According to a 2019 census, there are 300,000 to 450,000 individuals in the world’s oceans. The male can attain a length of 60 feet and a weight of 60 tons. It can swallow a giant squid, giant octopus, or large shark in a single gulp. Why and how? It is not a baleen whale, which sieves krill, small fish, and other marine organisms from the ocean water; it is a toothed whale, more closely related to orcas and dolphins.

According to the same book, there are 120 species of marine mammals, including seals, sea lions, walruses, and manatees, a few of which live almost entirely in fresh waters. One, in the last group, the Steller’s sea cow, which fed on seaweeds and attained a length of up to 26 feet and lived in the Bering Sea, has already become extinct due to overhunting. The demand was so great, it became extinct only 27 years after it was discovered in the mid-1800s.

Imagine, as per Governor Cuomo’s latest proclamation, the Atlantic Ocean of New York State’s shores will soon be populated by hundreds of wind turbines. These 600-foot-tall structures will almost be too distant for us humans to see, but the whales, dolphins, and porpoises will not only see them, they will also echolocate them until their ears are driven crazy, and at what a price?