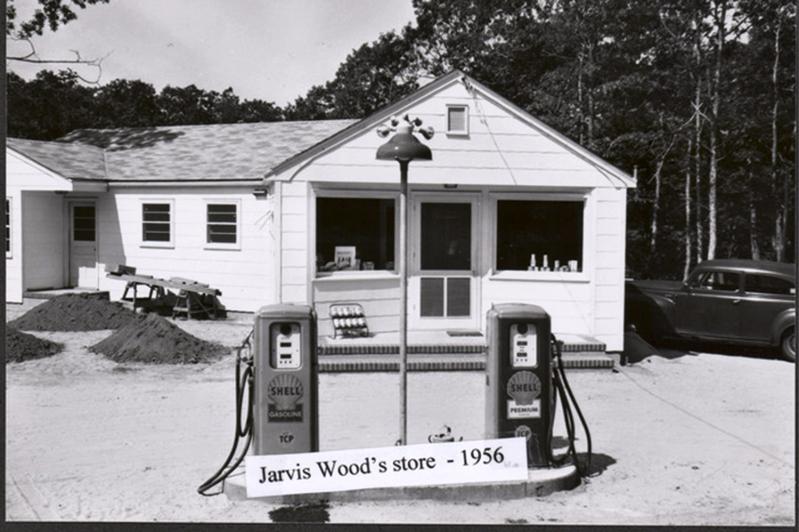 As a researcher, I often find things when I’m no longer looking for them. I would have loved to be able to share the photos seen here of Jarvis Wood’s store (later Marty’s Store at 472 Old Stone Highway) with a researcher a few years ago. Recently, we’ve been working with the Springs Historical Society to set up a database of its archives, which include these photos.

Vernon Jarvis Wood (1908-2007), better known as Jarvie Wood, was the oldest of Elmer and Elsie Miller Wood’s 12 children and the grandson of Jarvis T. Wood (1857-1942). V. Jarvis Wood was a bayman who also ran a grocery store and gas station, although accounts differ about whether he ran the store “after fishing” or he merely took a few years off from fishing.

As a young man, Jarvis initially opened a store with a gas station somewhere on School Street, probably between the Springs School and Springs-Fireplace Road. He briefly operated a garage with Robert Miller in Amagansett before opening the store in Eastside sometime before 1954.

Jarvis and his wife, Nancy Miller Wood, lived in an apartment attached to the store they operated. The store stocked everything from canned goods and Wonder Bread to bicycle tires. The interior images from August 1956 make it easy to imagine children walking over for milk or gumballs.

It isn’t clear when Jarvis stopped running the store, by then known as Marty’s, but by 1976 Jarvis worked full time as a trap fisherman. In 1982, he was still fishing, although in a “Maritime Folklife Oral History” he noted that he liked the current spot near Albert’s Landing since it was close to home.

The database these photos came from is a work in progress, but I find myself thinking of the many previous researchers who were looking for images we’ve just digitized, and how many of them will find what they’ve been looking for in this archive.

A Reminder From PSEG About Digging
Petition to Speed Up Sand Replenishment in Montauk
Artistic Portraits of M.L.K. Up for Auction on Saturday
END_OF_DOCUMENT_TOKEN_TO_BE_REPLACED