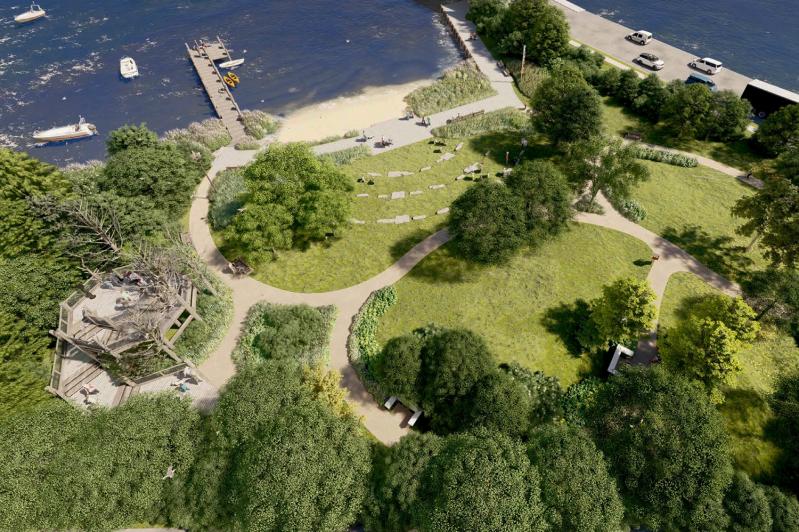 A conceptual plan for the Steinbeck Waterfront Park features circuitous pathways, a dock from which small boats and kayaks could be launched, a beachfront amphitheater, and a walkway connecting to Windmill Park.
Hollander Design
By Jamie Bufalino

Southampton Town’s purchase of 1.25 acres in Sag Harbor Village that is to become the John Steinbeck Waterfront Park was finalized on July 24 and later that day the public got its first look at conceptual plans for the park.

The town used $10.5 million of community preservation fund money to purchase 1, 3, and 5 Ferry Road from Jay Bialsky, a real estate developer. The property is on the Sag Harbor side of the bridge that leads to North Haven.

Mr. Bialsky had bought the lots in early 2018 from Greystone Property Development, a Manhattan real estate company that had been opposed to selling the land to the town. He also purchased an adjoining property at 2 West Water Street from the firm, and plans to build a condominium complex there.

In May 2018, the town announced that a deal had been struck to purchase the Ferry Road parcels, which, for more than a decade, had been blighted with abandoned structures, including the Harborview Professional Building. One stipulation to the purchase, according to the town, was that the land had to be fully cleared and ready to turn into a park. Last year, three buildings and a parking lot were removed from the property, and topsoil added to the newly vacant site.

“The conditions were satisfied,” Lisa Kombrink, Southampton Town’s C.P.F. manager, said on Monday. Prior to finalizing the purchase, the town, she said, conducted several inspections of the property, and had an environmental assessment done that included soil testing.

An intermunicipal agreement between the town and the village that will define how the park is managed, how it can be developed, and who will pay for improvements is still being worked out, said Ms. Kombrink.

Early plans for the park, prepared by Edmund Hollander Landscape Architects, were unveiled at a Sag Harbor Village Board work session on July 24. “This is the first time this has been shown publicly,” said Mayor Kathleen Mulcahy, who described the renderings as “very conceptual” and invited the public to weigh in on the project. “This is the first of many conversations we’ll have about the park,” she said.

Steinbeck Park will be linked by land and water to Windmill Park to create a large green space with native foliage, a natural beach line, varying topographies, and “such a great view” of Sag Harbor Bay, said James LaRocca, a board member.

As currently proposed, the park includes a dock from which small boats and kayaks could be launched into the bay, circuitous pathways as well as a boardwalk along the water, a birdwatching tower, an elevated grove for dining, and a beachfront amphitheater formed from the natural slope of land. The park will be enclosed by a split-rail fence, said Mr. LaRocca, and it will be accessible to those with disabilities.

Ms. Mulcahy said the village would develop a budget for the different elements of the proposal, and finance them sequentially as money becomes available.