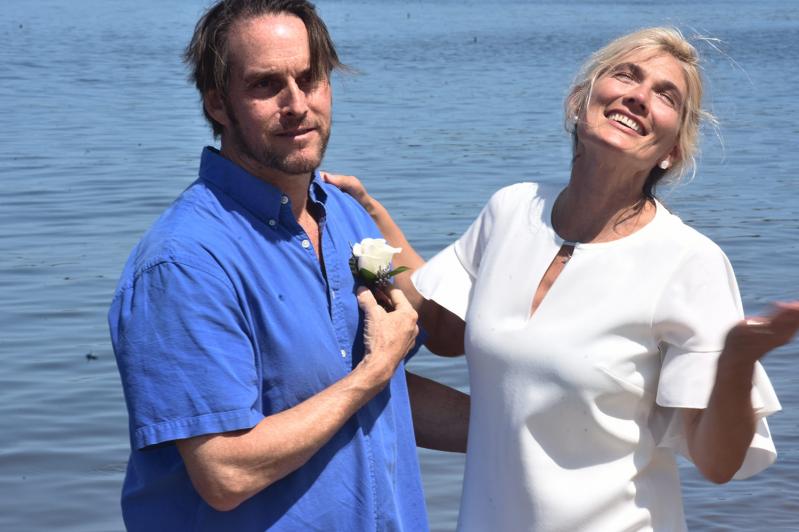 Elizabeth Halliday and Roderic Randolph Richardson were married last Thursday. The barefoot wedding took place in the water, along the foreshore of Havens Beach in Sag Harbor. Kathleen Mulcahy, the newly elected mayor of Sag Harbor and longtime friend of the groom, officiated, her first such wedding.

Susan Wood Richardson, the groom’s stepmother, hosted an intimate gathering in Amagansett preceding the nuptials, and Alice and John Tepper Marlin, family friends, hosted the wedding reception at their house in Springs after the ceremony.

Mr. Richardson, who is known as Rod, grew up in New York City and East Hampton. He has been a resident of Amagansett for 20 years. An alumnus of Columbia College and New York University’s Stern School of Business, he serves as president of the Grace Richardson Fund, a small private foundation that pioneers new free-market solutions to critical issues stuck in political gridlock, including climate, environment, and health care. Locally, he is a champion of public access to nature and the shores of New York State.

He is the son of Patricia Anne and Robert Randolph Richardson, both deceased.

Ms. Halliday, who is known as Hallie, grew up on Philadelphia’s Main Line. She attended the Agnes Irwin School for Girls there, and earned a B.A. in communications from the University of Delaware. She began her career with the Associated Press in Central America and Hawaii. She now owns and operates a website design firm and hosting company, datahampton.com. Locally, she is a member of the East Hampton oyster gardening program. She also advocates for conservation, and for accelerating clean energy deployment via free market policies.

She is the daughter of Emily W. Heebner and Henry R. Heebner.

The couple began dating 30 years ago, but broke up in 1991. After a 19-year hiatus, “They have been inseparable ever since getting back together in 2010,” Mr. Richardson wrote.

The couple plan an additional wedding celebration in New York City in September.