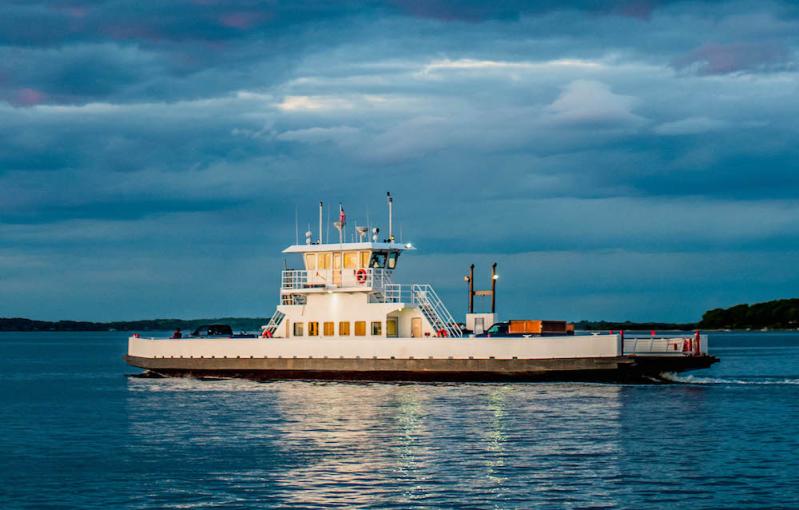 The South Ferry, pictured here, and the North Ferry have both increased fares this season.
Max Philip Dobler
By Christine Sampson

The earliest morning ferries operated by Shelter Island's North Ferry Company are departing even earlier now in a change that was made with commuters in mind, the general manager of the business said Friday.

The first boat now departs at 5 a.m., followed by a second at 5:30 a.m., according to the new schedule. Previously, the earliest ferry departure was 5:10 a.m. on Mondays during the summer and immediately following holidays, and 5:40 a.m. on weekdays otherwise.

According to Bridg Hunt, the general manager, the new additions to the schedule allow Long Island Rail Road commuters to make the 5:25 a.m. train out of Greenport as well as a 5:55 a.m. Hampton Jitney bus. The change has been popular, Mr. Hunt said.

"The proof is in the pudding," he said. "The very first day we had six people on the first boat, and we anticipate it will grow."

Mr. Hunt said it means longer hours for the ferry crews. "It's quite expensive for us, but we think it's part of our service commitment," he said. "Where there's a need, we want to respond."

The ferry fares, which went into effect right before Memorial Day, increased from $11 to $12 for a one-way fare and from $16 to $18 for a same-day round trip, including just the driver. Additional passengers are still $2 each, and the walk-on passenger rate of $2 per person did not change.

Fares recently increased on the South Ferry, too.

Drivers of cars and four-wheel trucks under 22 feet will now pay $15 for a one-way trip and $20 for a same-day round trip, increases of $1 and $3, respectively. Commuter passes for residents, previously $25 for five days, are now $27, and those that were $30 for six days are now $33. Seven-day commuter passes have been eliminated.

"It's been seven years since our last rate increase," said Nicholas Morehead, the South Ferry Company's chief operating officer. "That's been a pretty good stretch to have kept the same prices."

He said the fare increases will pay for a new "big boat," bringing the company's total to five vessels, at a total of $3.5 million. A new dock and slip will be necessary, along with upgrades at the 1800s-era cow barn that serves as a maintenance facility. The South Ferry company is also investing in technology to accept credit cards on board, and is setting itself up to handle increases in employee salaries, health insurance, and fuel costs, Mr. Morehead said.

"We think that it's in the best interests of our customers," he said of the improvements.

Mashashimuet Park's History and Future
A Conference for Young People to Create Solutions
Get Outside, Get Moving
END_OF_DOCUMENT_TOKEN_TO_BE_REPLACED