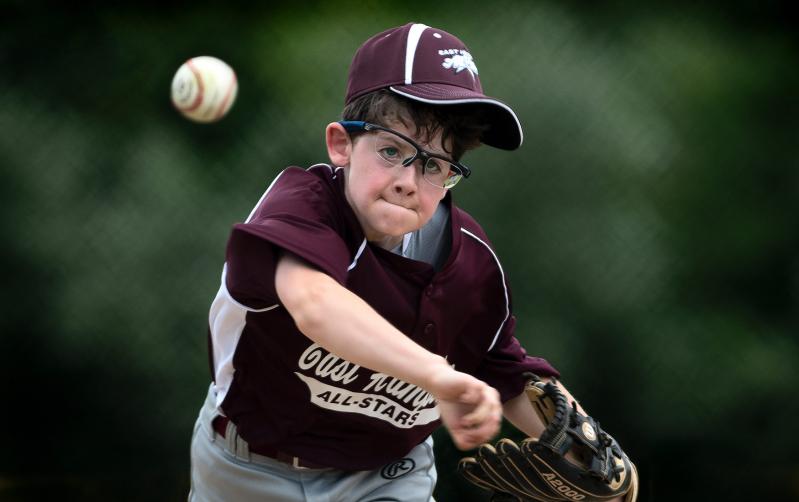 Hudson Meyer, the 11-12-year-olds’ starter here Sunday, put everything he had into it.
Craig Macnaughton Photos
By Jack Graves

Both of East Hampton’s traveling all-star baseball teams were on a good footing as of Sunday, with the 11-12s heading out of pool play looking especially strong and the 9-10s pretty good.

In games played here at the Pantigo fields last week, the older entry, coached by Nicole Dickinson and Andrew Rodriguez, won big both times it took the field, 20-0 versus Sag Harbor-Bridgehampton and 15-0 vs. Southampton. The 9-10s, coached by Mike Hand, lost 5-4 to North Shore, its first loss in pool play vis a vis four wins. The pitchers, Trevor Meehan, who is very consistent, and Kai Alversa, who took over in the top of the fourth, deserved better; the defense was a bit shoddy.

The older team seems to have it all — pitching, hitting, and fielding — but Henry Meyer, who assists Vinny Alversa in coaching East Hampton High School’s varsity baseball team, and whose son, Hudson, plays on the 11-12s, said “they’ll definitely find some competition in the semifinals, and, if they make it, in the final.”

Before Sunday’s game with Southampton began, Alex Walter, who, with Bill McGintee, coached a champion Little League all-star team in the early 1990s, said that this edition reminded him

of the years in which Ross Gload, Kevin Somers, and Meyer played. Gload went on to a Major League career.

The 11-12s, thanks largely to two home runs by the cleanup hitter, Hudson Beckmann — one good for two runs, one for three — bageled Southampton 20-0 at Pantigo last Thursday. Beckmann finished the game with seven runs batted in, the final two coming home on a triple in the bottom of the third. That blow upped the lead to 18-0. A double by Carter Dickinson made it 19-0, and, with two outs, a single by Leonardo Abreu capped the scoring.

Liam Cashin, with Hudson Meyer catching, finished Southampton off in the bottom of the fourth on a strikeout, a force play at second, and a popout to Dickinson at third base.

In Sunday’s game, the team scored eight runs on eight hits in the top of the first inning, sending 13 hitters to the plate. Meyer, Carter Dickinson, Luke Rossano, Cashin, and Tyler Hansen drove in the runs.

East Hampton made it 12-0 in the top of the second (Southampton was the home team that day). Beckmann, hitting fifth, led it off with a hot shot off the shortstop’s foot, after which Travis Kreymborg, Southampton’s third baseman, made a flat-out one-handed catch of Justin Prince’s liner. Rossano then singled, for 9-0, and Cashin tripled to right, for 10-0. A base hit by Victoreddy Diaz drove Cashin in. Liv Kuplins, the leadoff hitter, followed with a single, as did Hansen, who drove in the 12th run.

Southampton loaded the bases with one out in the bottom half, but Meyer, after fielding a dribbler, got the force at home, after which Cashin’s throw to first capped an inning-ending double play.

It was East Hampton 13, Southampton zip going into the top of the fourth, by which time thunderheads were massing in the sky. It was up to the umpire, the scorekeeper, Andrew Wilson, said — the game could be suspended if the umpire wished to do so at any time.

Meanwhile, they played on. Abreu, who had come in for Meyer, struck out in leading off, but then Dickinson doubled inside the third baseline, moved to third on a single by Beckmann, and scored soon after.

“Fifteen after three,” Wilson was overheard saying to a spectator who had asked when the “mercy rule” could be invoked. With Dickinson’s run, East Hampton led 14-0, and rain was falling. There were two outs when Cashin, the eighth hitter in the lineup, came to bat in a downpour, with runners at the corners. A high pitch to him that bounced back off the catcher’s mitt and rolled to the backstop ended it as Beckmann ran home with the all-important 15th run as most of the spectators ran for cover.

Back the 9-10s, a wild pitch by North Shore’s hurler in the bottom of the third allowed East Hampton to tie the score at 2-2 in a game played here on June 26.

A misplayed fly ball in center field led to North Shore taking the lead again, at 3-2, as the fourth inning began. By the time it was over, the visitors, with one run coming home on a 6-3 putout and one more as the result of an infield error, led 5-2.

East Hampton loaded the bases with two outs in the bottom half. With Jackson Carney, the leadoff hitter, up, the runner at third scored on a wild pitch, after which Carney lashed a run-scoring line drive through the left side of the diamond, bringing the young Bonackers to within one of a tie. A nubber down the third baseline enabled Kai Alversa to reach first base safely, loading the bases again, but a strikeout ended the inning.

Likewise, a strikeout ended the Bon­ackers’ fifth, leaving a runner stranded at third.

Alversa, who had finished the fourth with a strikeout and had struck out the side in the fifth, struck out the first two batters to face him in the top of the sixth. The next one beat out a dribbler to first, but Alversa got the third out on a groundout to first.

Bonac fans were hoping for a comeback in the bottom of the sixth, but it didn’t materialize. Two strikeouts and a popout to second and that was it.