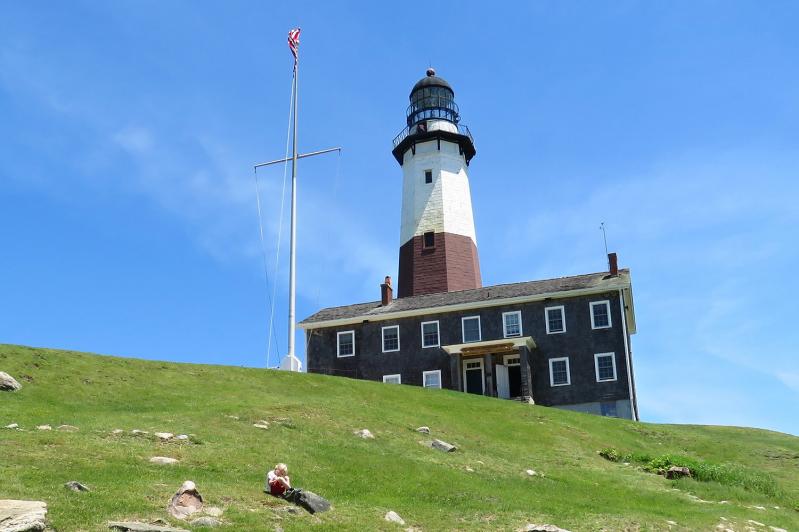 The tower of the Montauk Lighthouse is to be temporarily stripped of its stripes as part of a restoration project expected to be finished in 2021.
Jane Bimson
By Carissa Katz

Visitors to the Montauk Lighthouse may not notice it yet, but a tower restoration expected to cost just shy of $1.1 million is in its early stages this summer, as the Montauk Historical Society committee that oversees the national historic landmark works to raise the money to complete the project by 2021.

Before it is finished, people will see the white and brown stripes stripped from the outside of the tower and the whole thing given a fresh coat of paint that will help it weather the elements for perhaps another 243 years.

“The tower walls are cracking and bulging, and some of the metalwork around the roof and the lantern itself have started deteriorating,” explained Nick Racanelli, a committee member who is taking the lead on the restoration effort. “The lighthouse tower itself is structurally sound; however, it needs significant restoration.”

The nearly 111-foot-tall tower, commissioned by George Washington in 1792 and finished in 1796, has inner and outer limestone walls with loose rubble in between them, Mr. Racanelli explained. Because the metalwork and glasswork at the top of the tower, where the light is, are in poor shape, water infiltrates the structure, wetting the loose material between the inner and outer walls. Bulges and cracks develop as that water freezes and thaws.

The restoration is to be done in three phases. First, the metalwork and glasswork at the top of the tower will be repaired and restored, and the paint will be stripped from the exterior of the tower. That will allow the damp walls of the structure to dry out. “We expect to have that done by the fall,” Mr. Racanelli said.

The second phase, which is to take place next year after the structure has time to dry out, will be to fix the cracks and bulges and “do a restoration of the exterior of the structure itself,” he said.

The final phase, set for 2021, “when everything is restored and we’ve stopped the water and fixed all that beautiful metalwork at the top of the tower,” will be to apply a breathable exterior coating — replicating the current brown and white striping — that will prevent the water infiltration that is so damaging to the structure.

“We’re looking at some methods to help prevent condensation inside,” Mr. Racanelli said. His Racanelli Construction Company is the project manager for the work being done at the Sag Harbor Cinema and also worked on the Watchcase condominiums and the John Jermain Memorial Library in Sag Harbor, but while he brings considerable restoration expertise with him to the lighthouse committee, his company will not be doing the lighthouse work. Instead, the historical society has hired a restoration firm and a consulting engineer to oversee construction.

It should be noted that although the Coast Guard maintains responsibility for the light and fog signal as navigational aids, the historical society owns the lighthouse and is responsible for its upkeep. Generally, it is a self-sustaining operation. The lighthouse gets some 100,000 visitors a year and gate entry fees and the gift shop pay for most of the usual expenses.

The committee will apply for grant funding from the New York State Office of Parks, Recreation, and Historic Preservation that could cover up to a third of the cost of the project. The remainder will come through traditional fund-raising, including the Montauk Music Festival Rocks the Lighthouse concert on Aug. 14 at the lighthouse amphitheater.

Paul Simon, who lives in Montauk, was the surprise guest at last year’s concert. This year’s lineup so far includes Tuatha Dea, Oogee Wawa, the Montauk Project, and Kate Usher and the Sturdy Souls. Tickets cost $40 and are available at montaukmusicfestival.com.

The committee has raised about $50,000 toward the restoration effort so far, and is looking for a major donor to kick off its campaign, as well as a “celebrity spokesperson” who will lend his or her name to the effort and possibly even meet with potential donors.

And this isn’t the only project at the Point right now. The Army Corps of Engineers is set to begin a $24 million reconstruction of the rock revetment protecting the lighthouse, funded by a Hurricane Sandy relief bill and money from the state. That project, which has not yet begun, should take two years.