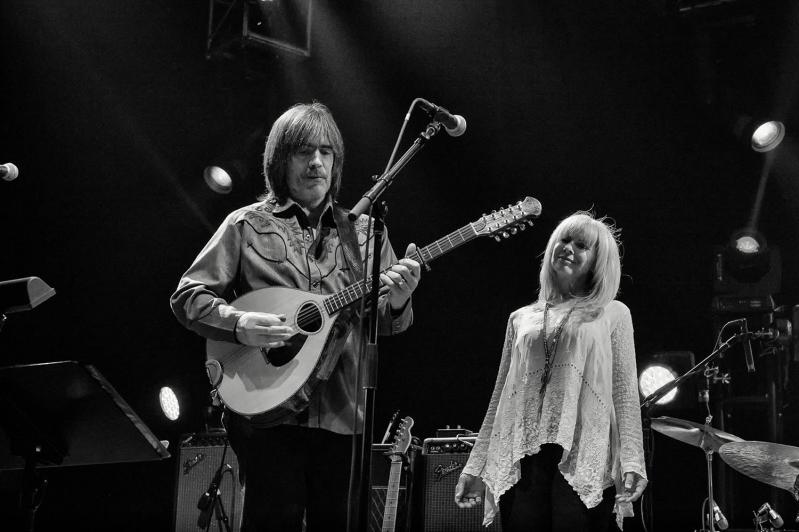 Larry Campbell and Teresa Williams will bring the spirit of Americana to Guild Hall next Thursday.
Marc Millman
By Mark Segal

Dining, creativity, surfing, and roots music are on Guild Hall’s cultural menu this week, starting Sunday morning, when “Stirring the Pot,” a series of culinary-centric conversations, will feature Tim and Nina Zagat, who founded the Zagat Survey 40 years ago. Initially a collection of reviews of New York City restaurants by diners, the survey at its height included 70 cities. In 2011, Google acquired it for $125 million.

Florence Fabricant, a food and wine writer for The New York Times, will interview the Zagats at 11 a.m., after which the couple will sign copies of audience members’ vintage Zagat guides (limit one per ticket holder). A question-and-answer session will follow. Tickets are $25, $23 for members.

Another conversation will happen on Sunday evening at 7, when Questlove, a D.J., producer, author, culinary entrepreneur, and longtime drummer for the Roots, the house band on NBC’s “The Tonight Show Starring Jimmy Fallon,” will discuss creativity with a guest to be announced. Tickets are $30 to $100, $28 to $95 for members.

“Heavy Water,” a documentary about Nathan Fletcher, a big-wave surfer, will be shown on Monday at 7 p.m. at Guild Hall. Called “pipeline royalty” by the Travel Channel, Mr. Fletcher’s lineage traces back to his grandfather, a surfing pioneer on Oahu’s north shore. The screening is presented by Gagosian Gallery in conjunction with “The Fletcher Family: A Lifetime in Surf,” an exhibition of Mr. Fletcher’s artwork that opens today at the gallery’s 976 Madison Avenue location.

Julian Schnabel, who contributed to a book on Mr. Fletcher and his family that will be published in November by Rizzoli, will introduce the screening. Attendance at the free program is by email to [email protected].

“An Evening of Country and Americana” will bring to Guild Hall Larry Campbell, a multi-instrument singer-songwriter, and Teresa Williams, a singer-guitarist, next Thursday evening at 8. The duo released its eponymous first album in 2015, after seven years of playing in Levon Helm’s band.

Of the couple’s second album, “Contraband Love,” Hal Horowitz, writing for American Songwriter, said, “Williams and Campbell reaffirm what anyone who has experienced them live can attest to; that this couple has tapped into the dusky spirit of Americana in all of its forms (folk, blues, rock and roll, gospel, etc.), and created a unique sound inspired by the past, that is spirited, stirring and timeless.”

Tickets are $30 to $65, $28 to $60 for members. For those who would enjoy a pre-concert dinner, The Star’s Experiential division, as part of its provision of innovative and unexpected experiences for its readers and their partners, will hold a private three-course dinner at the Maidstone Hotel at 6 p.m. The cost is $110 for dinner and a concert ticket, $135 for dinner and preferred seating.