Demolished in the ’40s but preserved on paper 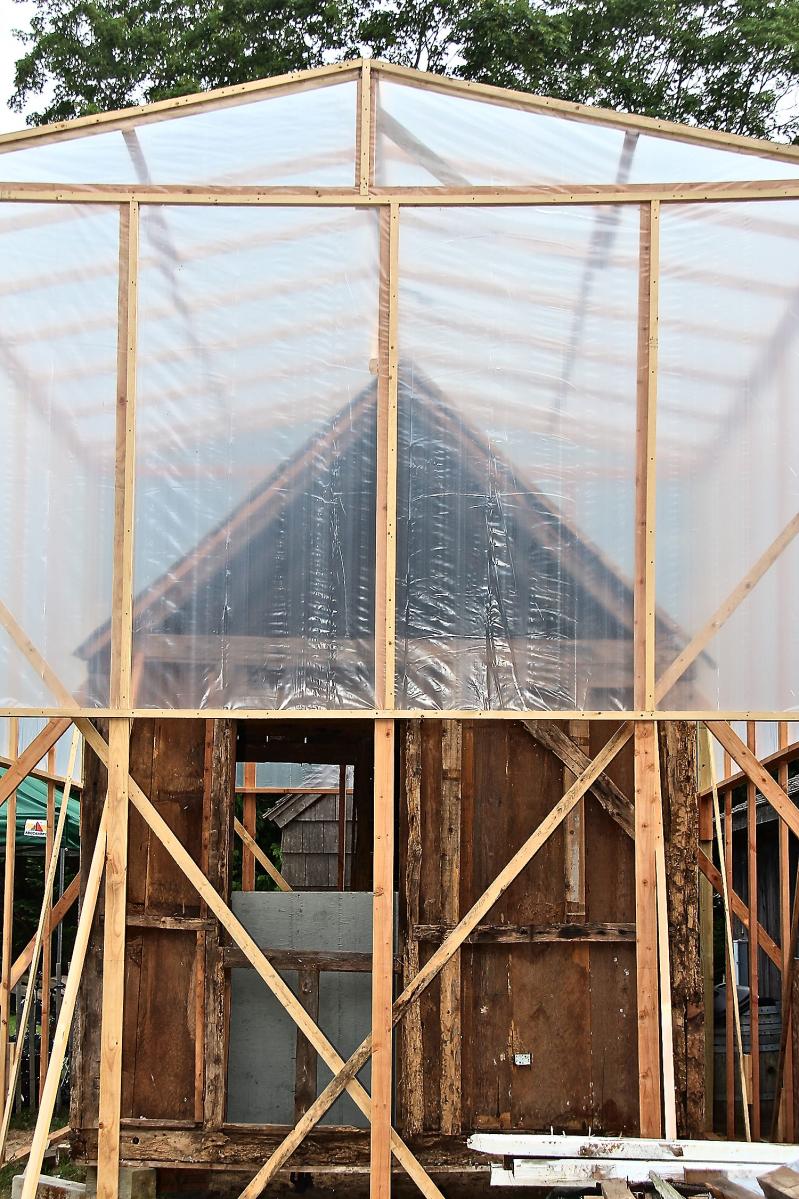 The historical Dominy clock shop, currently undergoing restoration at the Mulford Farm, will be moved to its original North Main Street site this fall.
Durell Godfrey
By Jamie Bufalino

The newly restored Dominy family woodworking and clock shops will return to their original East Hampton site on North Main Street soon after Labor Day, said Robert Hefner, the village’s director of historic services, who is supervising the restoration of the shops, as well as the reconstruction of the Dominys’ timber-frame house, which will serve as an adjacent exhibition space.

The Dominy craftsmen, including Nathaniel IV; his son Nathaniel V, and his grandson, Felix, were renowned for their woodworking and clock-making skills. The 1791 woodworking shop and 1798 clock shop, which have been undergoing restoration at the East Hampton Historical Society’s Mulford Farm on James Lane, are the only Dominy buildings still in existence. The family house and other structures were torn down in 1946; replicas can be seen at the Winterthur Museum in Delaware.

Last November, the village board accepted a bid from John Hummel and Associates to do the construction. The New Jersey Barn Company, a firm with expertise in restoration, is also working on the project.

The plan was to raise the frame of the house/exhibition space and move the shops this summer, Mr. Hefner said at the time. However, on the first day of excavation, workers uncovered an old drainage pipe running from the Emergency Services Building parking lot directly under the site.

There had been no record of the pipe. It was a corrugated pipe from the 1950s that was in bad shape, Mr. Hefner said, and it had to be replaced with one that would be more long-lasting. In addition, a natural gas line was found to be obstructing the pipe.

A crew from Hummel replaced the drainage pipe with a portion of a dredge pipe that had washed ashore on Georgica Beach in January, and National Grid repositioned the gas main.

Another surprise found during excavation: The water table was higher than expected, meaning that the plan to have a full basement with a seven-foot ceiling in the exhibition space had to be scrapped. The building will instead have a four-foot-high crawl space, with the mechanicals housed in a first-floor storage room rather than the cellar.

“We got off to a rough start,” said Mr. Hefner.

On the bright side, the New Jersey Barn Company has finished building the timber frame for the reconstructed house, which will be consistent with the 18th-century structures. The company used detailed architectural drawings and specifications of the house, which were documented, before it was demolished, in the Historical American Buildings Survey, an arm of President Franklin D. Roosevelt’s Works Progress Administration.

The plan was to assemble the frame this summer on the grounds of the parking lot, “and then they’ll raise it with a crane. So you need a lot of space,” Mr. Hefner said recently.

As it turns out, a bit too much space, at least right now. Although the village owns the parking lot, there is a covenant on the property that says the I.G.A., across North Main Street, must have access to 56 parking spaces for its customers from Memorial to Labor Day.

The frame will instead be raised in the lot right after Labor Day, and the house will be moved to the site after that. “As soon as the frame is up, John Hummel will work on the exterior, sheathing, and insulation, to get it enclosed before winter,” he said.

There’s an upside to the delay: The New Jersey Barn Company had more time to work on the woodworking shop, which is nearly finished. “The only thing to be done is to put the windows and exterior insulation in, and add the shingles,” said Mr. Hefner.

When the shop is moved on site, it will be integrated into the house, as it was when the Dominys lived and worked there.

The restoration of the clock shop, which John Hummel is also working on, should be finished by the end of summer.