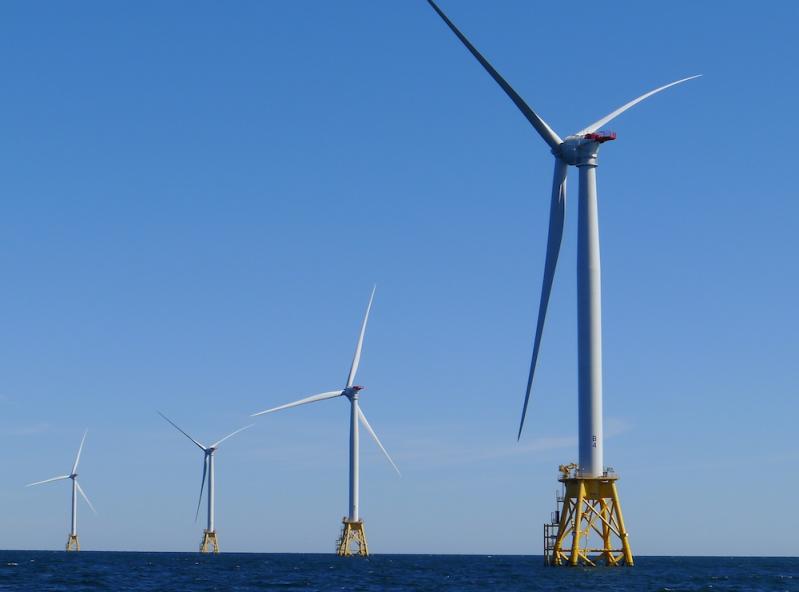 The country's first offshore wind farm, off Block Island, is set to be joined by not only the proposed South Fork Wind Farm, but two more whose developers were awarded contracts by New York State on Thursday.
Christopher Walsh
By Christopher Walsh

In a move that represents the largest commitment to offshore wind power in the country, Gov. Andrew M. Cuomo announced last Thursday that Sunrise Wind, a joint venture of the Danish energy company Orsted and the Connecticut company Eversource, and Empire Wind, proposed by the Norwegian company Equinor, have each been awarded a contract to develop offshore wind farms that will generate enough electricity to power more than 1 million residences.

Governor Cuomo said that New York State will lead the way in development of offshore wind. The two wind farms will jointly generate 1,700 megawatts of electricity.

The 880-megawatt Sunrise Wind farm is to be constructed in a federal lease area more than 30 miles east of Montauk, adjacent to Orsted and Eversource’s proposed South Fork Wind Farm, sending the electricity it generates to Long Island, “and Long Island needs that power and needs it today,” the governor said. A map depicted the wind farm’s export cable making landfall well west of Southampton, connecting to a Long Island power Authority substation in Holbrook.

The 816-megawatt Empire Wind is to be situated 14 miles southeast of Manhattan; its electricity will serve New York City. On and offshore construction could commence in 2022 with the projects completed by 2024, Governor Cuomo said.

The announcement of the two lease awards last Thursday came as the governor signed into law the Climate Leadership and Community Protection Act, which sets the state’s goals of 70 percent of electricity derived from renewable sources by 2030 and 100 percent carbon-free electricity by 2040. “By 2050, we will reduce greenhouse gas emissions overall by 85 percent, with a new climate council established that will offset the remainder to make New York a 100 percent carbon neutral economy, period,” he said.

With former Vice President Al Gore at his side and standing before officials and activists at Fordham University School of Law in Manhattan, the governor said that “the actions we take today will be the most consequential of my administration.”

Both men denounced the Trump administration’s environmental policies and the president’s denial of climate change. Thursday’s actions, the governor said, “literally will determine the future, or the lack thereof.”

“To deny climate change is to deny reality,” Governor Cuomo said. “All credible scientists agree. Yet the President of the United States denies it. Why? Because it is not politically convenient for him to acknowledge reality.” Fossil fuels, he said, “represent major industries in this country, and because change is hard, it causes disruption, and political systems abhor disruption. But the American chorus demanding action is now deafening and we are overpowering the forces vested in the status quo,” he said to cheers.

The governor also announced a $20 million program to train workers in wind power jobs. The state university system will “lead the nation in this new job training opportunity,” he said. “These projects will generate $3.2 billion in economic activity, 1,600 construction and permanent jobs, and these projects will have a union project labor agreement before they commence.”

Mr. Gore, whom the governor said is “a leader for the ages” and with whom he served in the Clinton administration, called New York’s actions “the most ambitious of any state in the country” in addressing climate change. “Our transition away from the dirty and polluting ways of the past is essential to our survival, for reasons well known by all of us here.” The effort is “not being led at the federal level at all, but, thank goodness, it is being led by New York State and others that have joined with the leadership of Governor Cuomo.”

Last November, the New York State Energy Research and Development Agency issued its first solicitation for 800 megawatts or more of offshore wind energy pursuant to the State Public Service Commission’s order adopting the Offshore Wind Standard, a framework for an initial phase of offshore wind energy solicitations. Bids were due in February. An announcement of the winning bids had been expected for weeks.

“I find this whole process horrifying, as a commercial fishing organization, as the wife of a commercial fisherman, as a member of a coastal community, and as an environmentalist that really cares about maintaining our food sources, in addition to the North Atlantic right whale,” said Bonnie Brady. Ms. Brady, the executive director of the Long Island Commercial Fishing Association and a candidate for East Hampton Town Board on the Independence ticket, has been an outspoken opponent of the South Fork Wind Farm. “This is not being tethered appropriately to protect the stakeholders. If it’s left to run at its own breakneck speed, I honestly believe we’ll be destroying the ocean to save the environment,” Ms. Brady said yesterday. “They want to put windmills every eight-tenths of a nautical mile in every direction.” She described the turbines as “an 850-foot tower in the ground, except you’re on water so you’re pounding it 200 feet into ground. If you’re a whale, marine mammal, or fish, good luck to you. It’s unconscionable.”

A stated goal calls for 9,000 megawatts of wind power by 2035. The first phase of 800 megawatts or more is intended to stimulate development of a domestic offshore wind industry.

In a statement issued shortly after the governor and former vice president spoke, Thomas Brostrom, chief executive officer of Orsted U.S. Offshore Wind, said that the announcement “secures New York’s role as a leader in the North American energy transformation.” Sunrise Wind, he said, “will ensure that the state and its residents not only benefit from clean, renewable power, but that they reap the rewards of being an early player in a growing industry.”

Orsted and Eversource claimed a commitment to a $10 million investment to create an offshore wind training center in partnership with Suffolk Community College and labor unions, as well as an operation and maintenance hub in the Port Jefferson area, construction and operation of which is expected to create more than 100 new full-time jobs.

Christer af Geijerstam, president of Equinor Wind US, said that, “Being selected in this highly competitive field of bidders shows the confidence that New York leadership has in Equinor’s capabilities of developing large offshore energy projects, delivering affordable renewable energy while also providing significant economic benefits locally. We are now looking forward to working with our partners throughout New York State to bring this project forward.”

Environmental advocates and others quickly joined the chorus of praise for the governor’s moves. “New York is leading the nation in the rapid transition from a fossil-fueled economy to 100 percent clean, renewable energy,” Gordian Raacke, executive director of Renewable Energy Long Island, said in a statement. “We are witnessing a tipping point in energy history and today’s commitment to large-scale investments in offshore wind power prove that New York walks the walk of powering our economy with renewable energy.”

“New York is battling the devastating effects of climate change right now,” Adrienne Esposito, executive director of Citizens Campaign for the Environment, said in a statement. “Raising homes, hardening shorelines, and constructing sea barriers will not change the impacts of rising sea levels and climate change. We cannot just adapt, we have to fight. And that battle means transitioning from fossil fuels to clean renewable energy.”

Peter Iwanowicz, executive director of Environmental Advocates of New York, celebrated the start of the State’s “official breakup with fossil fuels.” Under the Climate Leadership and Community Protection Act, New York, he said in a statement, “will both slash climate pollution and provide a playbook for the rest of the nation to follow.”

Scientists have reported with increasing urgency that global greenhouse gas emissions must decline precipitously and quickly in order to lessen the impact of rising temperatures, which are resulting in more extreme weather, wildfires, melting glaciers, and rising sea level. “We are at a crossroads on the environment,” Basil Seggos, commissioner of the State Department of Environmental Conservation, said moments before Governor Cuomo’s remarks. “We are almost literally watching the world melting. The federal government has chosen to turn a blind eye, retreat from action, and even make matters worse. It has fallen to states to lead. I can say with clarity, no state is doing what New York is doing, no governor is doing what Governor Cuomo is doing for the environment.”

“We’re gaining momentum,” Mr. Gore said. “We still have it within our power to grab hold of this crisis.”

This article has been updated since it was first published with the version of the story that appeared in print on July 25, 2019.